If you’ve never seen 8 Mile before and are interested in the sound of this underdog character piece, do me a favour. Watch it twice. The first time you watch it, focus on Eminem, taking in his performance, the context of his casting and the position of this movie on his career timeline. The second time you watch it, push past Eminem’s casting and focus on the actor as a character rather than a controversial celebrity, dragging yourself into his plight and world. Only then can you truly appreciate the art of 8 Mile. 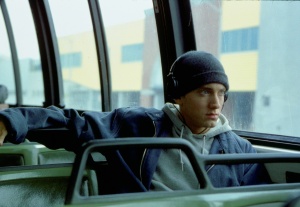 Let’s do the typical thing then and spend a paragraph talking about Eminem. The man is a controversial figure at the best of times, often poking satirical holes in the world around him, whether he is openly being humorous or launching into an honest rap about more serious content. Back in the days of 8 Mile the token stereotyping of Marshall Mathers was either childishly immature or unpredictably angry. It would have been madness to even utter his name in the casting for a lead role in a serious film. However, in taking onboard the role of Rabbit, a struggling rapper in Detroit, Eminem has immortalised himself in film history. The strength of his casting is sealed by the fact Eminem has never really approached acting again, especially not in a dramatic character piece such as 8 Mile. It gives this film an undeniable cult status, the kind of one-of-a-kind atmosphere that gives this film a realistic edge that an actor playing a rapper would just not have been able to fill. While Eminem’s casting is bizarre, it is easy to see what attracted the singer to the role. While this is, by no means, a real life depiction of Eminem’s pre-stardom days, fans of the rapper will pick up themes and motifs that ring true with Marshall’s upbringing. The unstable relationship with his mother. The success in underground rap battles. The danger of being a white man in a black industry. Eminem has been given a chance to go back and fictionalise his origin story, creating a mythological cloak for his work, without being branded as a liar or fraud. This is all part of his image, not his personal life.

Of course, while the context of Eminem grants 8 Mile a fresh vibe that other films cannot hope to mimic, the movie has to be good for all of these points to land. Therein lies the risk in casting someone as volatile as Eminem, a man who hasn’t truly acted a day in his life. However, Eminem brings two things to 8 Mile. One is music, which, predictably, is the bread and butter for this film. Eminem walked away with an Academy Award for Best Original Music, a well-deserved accolade. 8 Mile wraps itself in Eminem’s lyrics, certain scene transitions playing stray soundbites of Eminem’s music – almost coming across as first drafts or rehearsals, adding to the sense we are watching a legend being born. The rap battles, where Eminem gets to plot out his infamous diss tracks, are golden, the meat of the story. While Eminem gives himself the best lyrical take-downs, across the entire rapping cast, the tracks are solid, poking fun holes at the imaginative and creative insults hurled around. A scene in a food bank, where a passer-by starts rapping to insult the homeless people is glorious, Eminem turning around and laying into the bully with some well-worded and amusing lyrics. Eminem brings both barely contained anger, but also charm to his music, so you feel his personality bleeding through the rap. But, that has always been the draw to Eminem’s work outside of this film anyway. The thing that surprises viewers of the film, including Eminem’s fan base, is how comfortable Eminem is with the acting side of things. He is utterly convincing as Rabbit. Sure, cynics will argue the rapper is playing himself, but for a man without an acting background, that still holds merit. Eminem bravely puts himself under the microscope, hiding behind the fact Rabbit is a fictional creation and not himself, but still opening up sore wounds for the good of the drama. Eminem is best when he isn’t afraid to show his vulnerable side. It’s not just the heroic vulnerable side either, like his love for his baby sister or his compassion for his friends, but the ugly side of vulnerability too. The crippling social anxiety. Throwing up over his shirt. The inability to help himself. When a big time rapper accepts a film role, you anticipate the part to be an untouchable hero who is constantly infallible. In embracing the part, ugly side and all, Eminem has given 8 Mile the kind of three-dimensional power that it could have only dreamed for.

But, you really must try to look past all of that. As proven above, there is reams of material to discuss about Eminem’s casting and special skill set he brings to the set. But the truth is that there is a whole film worth praising when you have looked past Eminem. For one, it is directed with a real beating heart, 8 Mile the sort of film that really needs a tremendous director to pull together. Hanson approaches 8 Mile like a boxing movie, comparisons being wisely drawn between this film and the original Rocky movie. Both featured underdogs rising through their social status to achieve something akin to greatness. 8 Mile doesn’t necessarily have a happy ending, but merely accepts that Rabbit is taking steps to one day, reach a happy ending. That finishing note is more powerful than a melodramatic jackpot win that makes the conclusion too sunny. As well as directing, the actors who aren’t Eminem need praising too. Eminem is such a big shadow to beat, that there are some great stars tucked away in this film that might be overlooked. Michael Shannon plays a deadbeat boyfriend with a nasty streak. Anthony Mackie is the big rap star everyone wants to beat. The central supporting stars are amazing too. Kim Basinger bears all in the difficult role of the mother, who isn’t quite parental material yet blunders on as best as she can. She can go from endearingly hopeless to annoyingly antagonistic, depending on Hanson’s directional choice and Rabbit’s point in his character arc. It gives the sense of a growing world just in the peripherals of 8 Mile’s storyline. Brittany Murphy should also be praised for a potentially thankless role of ‘local model/party girl’, who Murphy elevates with an intoxicating air of mystique and depth. You feel like you never truly understand the character, which makes some of her nastier actions feel forgivable; we never knew the demons that pushed her into making those decisions. This is aided by Hanson’s direction, who somehow manages to direct the story in a way that never seems to blame her. Perhaps this is why 8 Mile is so riveting. It feels able to duck away from the expected norms of cinema. The rapper turned actor shouldn’t have worked. Rap cannot possess this much story-telling depth. But Hanson, and Eminem, prove those critics wrong with film-making history.

Final Verdict: The cinematic equivalent of a mic drop. What more is there to say?