Season Three is potentially BoJack’s most interesting season for a few reasons. The main reason is that this feels like BoJack Horseman realising it was attracting a wide fanbase. Anyone that survived the great Netflix cull deserves a touch of cockiness and BoJack never even came into question. The audience were lapping it up, even with a second experimental season that really pushed the serious gritty drama badly hidden behind the gags. Season Three sees the writers begin to test their popularity with some bold moves. 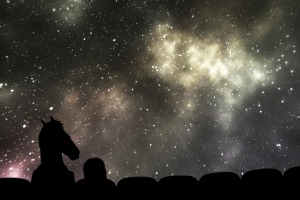 There are several episodes of Season Three of BoJack Horseman that really do feel like the writers going out on a limb and trusting their audience. It’s a clever move. Even the times a joke doesn’t work, you feel even closer to the show, because it trusted you with such a surprising change in tone. Two examples spring to mind for different reasons. One episode sees BoJack go to an underwater film festival as he prepares for the premiere of Secretariat. The issue is that, as a horse and confined to a diving suit, BoJack can’t speak. The whole episode becomes a physical comedy piece, done almost entirely without dialogue. However, while the episode plays off like the gimmicky part of a TV comedy show, the writers expertly weave it into the plot and characterisation of BoJack. He meets Kelsey Jannings, the director who he got fired for pushing for a controversial scene in the Secretariat Movie. Unable to apologise, he spends the whole episode trying to make it up to her, amidst other silent, wacky misadventures. It is also nice seeing some of the fish visual gags make their way into the show (sardines packing themselves onto public transport is a neat joke). The other risky leap of faith from the writers isn’t a gimmicky episode, but a controversial one. I have always applauded BoJack’s decision to stay away from the insulting topics, choosing to toe the line, rather than boldly crossing it for nervous laughs (I am looking at you, Family Guy!) However, one episode sees BoJack Horseman daringly dive into the topic of abortions. To bring up the specifics of the plot will ruin one of the left-field twists the show has packed into this busy season, but the show makes some outlandish statements, even going as far as to have a pop icon make a song about her upcoming abortion, titled ‘Get That Fetus, Kill That Fetus’. For a moment, it looks like BoJack has snapped, unsure what to do with its newfound popularity and resorting to the kind of offensive humour that other animated shows like South Park are known for. But then the show ends on a thoughtful note, where a background character suggests that shows poking fun of serious subjects in insensitive ways are often attempts to add levity to dire situations, giving victims of these topics a breath of fresh air and humour in a clouded atmosphere. It could be dismissed as excuse-making, but BoJack Horseman is definitely opening a debate. It feels like the writers are using this position of power to make some strong talking points.

Thankfully it is not all risqué writing, the writers knowing that whatever got them to this top spot of animated comedy should be put first and foremost. We get the usual crafty blend of serious drama and cracking jokes. Sometimes it might veer on repetition, as events go wildly out of control and BoJack starts repeating mistakes of the past. However, perhaps that is the point the show is trying to make, as BoJack continues to drag those around him to the ground. The final few episodes bring out a shock death that comes out of nowhere, but has dire consequences for BoJack’s sanity. That being said, we have been here before and, to a point, the show needs to find some new ground to take this character. One shot at the end of this season suggests the fourth outing may have found it. One way the season does keep things ticking over is by making sure that the other main characters get enough screen time. When BoJack started, a few of these characters looked like they would be strong starts for the series, but fade away after time. It is a credit to the show that they are still defiantly relevant to the plot. Todd reconnect with an old friend who is clearly after a relationship. Princess Caroline is starting her own agency, but discovers it is harder than she presumed. Her relationship with BoJack is also brought into question, whole episodes dedicated to understanding her better. Mr Peanut Butter gets more to do than just be the dumb, funny one (although he does plenty of that too – spaghetti strainers, for example). And Diane continues to fall down her own rabbit hole of depression, suggesting her and BoJack aren’t too different after all. But the show knows when it needs to flick back to BoJack. He has enough demons to fuel the show himself (he is going for an OSCAR nomination, despite knowing his entire performance has been digitally added in post-production), so when an episode strips away the likes of Princess Caroline or Todd, we are still gripped. The writers know what they are doing.

Final Verdict: A riskier, but no less successful third season of BoJack suggests that the new hot animation is going nowhere just yet.