Over the years I have lost a bit of interest in BBC One. Their shows are usually not for me. However, there are a few aces in the holes that the BBC save for special occasions. I am namely thinking of Sherlock and Luther, shows so brief that the marketing and build-up to their release is more akin to a film than a series. With only two episodes in this season, marking the briefest season with Luther to date, Season Four is essentially a made for TV movie, with the benefit of a interval/cliffhanger at the midway point. While two episodes is rarely enough time to make a decent enough impact, it does create this unique frame of mind in the viewer. We are going to get a brief return from one of the most successful shows – and in my opinion, the very best – on BBC One. We better knuckle down and enjoy it. 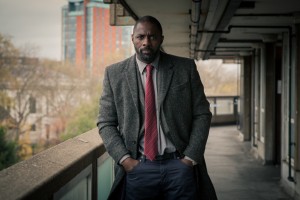 We catch up Luther, on leave from the police force. He and Alice are fully committed to their plan to run away together, but Alice is absent. As Luther tries to figure out what happened to his partner in crime, two police detectives chasing up on some loose ends to the Alice case show up at his door. Their investigation is put on hold, when a deadly new serial killer appears back in London. The city is being terrorised by a cannibal, who eats his victims to gain their identity. As they chase down leads, trying to catch this monster, Luther is dragged back to the police force, on the hunt for Alice. Is her disappearance connected to an old-time London mobster, a mysterious clairvoyant and a cold case, where Luther is convinced they put away the wrong killer? On top of that, Luther finds himself being hunted down by hitman after hitman, really forcing him to utilise every piece of wit and skill he has at his disposal. That is an awful lot to cram into a season, let alone one that comes in at just under two hours. However, that is the charm of Luther. Every season throws problem after problem at the hero and we, as an audience, enjoy watching John Luther juggle all of these different villains and life-threatening situations. This is arguably his busiest challenge yet. As the final quarter of the season hits the closing stretch, we question how he can resolve each problem in time. He still hasn’t found Alice! The cold case’s killer still hasn’t been put away? What about the dozens of other hitman heading his way?! And that is the brilliance of Luther. While the plot is crammed full of narrative twists and plot points, the show never rushes. Much like the central character himself, he confidently examines his surroundings, letting the story do the talking, rather than any rash actions. The show never rushes through a beat, like many other shows. It is consistently good and there is never any moment where you are fed up with the show or disappointed with a sudden change in tone.

Of course, in terms of direction and performances, it is still BAFTA-worthy. My favourite thing about Luther is how it doesn’t treat itself as a TV show. This is nothing less than cinema quality. The set and story aren’t necessarily the breakneck blockbuster stuff we would pay to see in a cinema, but the direction doesn’t treat it as such. The cinematography is beautiful, the cameraman always keeping his cast to the edge of the frame, throwing up this empty space to one side of the shot. It is a trademark of the show and fits amazingly well with the tone. Idris Elba is phenomenal. He is a paradox of an actor. He never does anything like a showsman. As an established actor, he could easily return to his roots, like a homecoming champion. But no, he allows the character and show to mould his performance, never doing anything that throws the structure out of balance. He quietly projects his character arc, whether it is the look as he wanders through a crime scene from his past or the quiet denial when he hears devastating news about an old friend. Yet at the same time, he fills a room. The sound engineering adds, or perhaps emphasises, his footsteps, so when he quietly steps through a set, he always has a presence. He is the dominant force of the show and that is how it should be. That being said, the writers leave room for the rest of the cast to get their time in the limelight. Perhaps series regulars, Dermot Crowley and Michael Smiley, are put on the bench for this season, but the new faces are great fun. Rose Leslie is the biggest attraction when it comes to the new cast and it is refreshing seeing her perform something that allows her to push her acting talents. As her character is forced through some horrifying scenarios, Rose Leslie handles each beat like a seasoned professional, putting herself in the list of British actors that need showing off.

Yes, overall, the season’s length stops it from being as good as it should be. While it is miles better than Season Three’s inconsistent quality, it doesn’t have time to do certain things justice. There is a brilliant cat and mouse game in an abandoned hospital, where Rose Leslie is stalked through corridors by a killer with a hammer, but it is over too soon. Luther doesn’t get much time to connect with the bad guy, which can be the best scenes Luther has to offer. Also, the hitman sub-plot, while boasting the coolest moment in Season Four, could have been allowed more time to breathe. However, these grievances are to be expected and with the little time the season was given, we are more than happy with the final product.

Final Verdict: Time is an issue, but Luther makes the most of it. Describe the fourth season in two words? Totally disco!