Season Five was a make-or-break season for Doctor Who. It was the first major shake-up to the season since the reboot way back when Russell T. Davies and Christopher Ecclestone arrived. Now, the show was being handed to a new show-runner, Steven Moffat (at this point, he had an untarnished record, when it came to stories), and the role of the Doctor was being passed from the much-loved David Tennant to the youngest Doctor yet, Matt Smith. We even had to come to grips with a brand new companion. Basically, if this season messed up, we could be saying goodbye to the new Doctor Who before it even began. 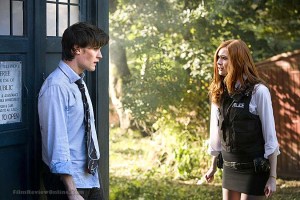 Thankfully, this season was, in my opinion, the best Doctor Who yet. It is easily the most consistently good season, with even the filler episodes winning warm smiles every time. From this point onwards, this is the bar I wanted future seasons to try and reach. Steven Moffat brilliantly writes himself a new Doctor that we can be proud of. This Doctor is one of the most oddball ones to date, falling from the sky and into the life of a young girl, haunted by a supernatural crack in her bedroom wall. This girl is Amy Pond and there is something ‘off’ about her. He takes her along with him on his adventures, hoping that he can stop himself from suffering with loneliness. However, that crack in time also follows him and soon the Doctor realises that the universe is on the verge of breaking, from some mysterious force known as ‘the Silence’.

Matt Smith is the perfect Doctor. There is just something so extraordinary about him, and despite following one of the toughest acts in the canon to date, he handles the material with relative ease. He is young and old at the same time. He commands authority with the smallest inflections in his tone. He has some of the best monologues imaginable, especially a chilling threat to the Weeping Angels that acts as a cliff-hanger for that particularly excellent two-parter. He is also just so much fun. He breathes energy into every moment. While it is hard to see here, because he generally has every other element of the series working with him, later on, we will see that he is good enough to carry the weaker episodes. Eventually Matt Smith will be the saving grace of Doctor Who.

Amy Pond is also a good companion. Karen Gillian isn’t as strong an actress as Jenna-Louise or Billie Piper, but she suits the role well. She is feisty, fun and the kind of girl that is tough enough to go travelling with the Doctor and come out the other side intact. She also adds a bit of maturity to the Doctor. She is sexy and knows it. We first meet Karen Gillian as a kiss-o-gram dressed as a police officer, which is basically BBC One family talk for hooker. In Episode 5, she tries to sleep with the Doctor. It is credit to Karen Gillian and the writers for keeping her character likeable, despite the fact she is basically attempting to cheat on her fiancé. It is actually a welcome change and it is a shame that after this season, Doctor Who veered the other way and got painfully child-friendly.

The finale is excellent. In many ways, it could have been an anniversary or send-off in its own right. It was emotional, epic and celebrated everything about Doctor Who. I loved how the penultimate episode introduced an awesome story and just built up and up on it. It kept rising, until the jaw-dropping twist and then we were hit with a horrific cliff hanger. Then the episode opened back up a week later and we started off small again. There was a nice, quiet ten minutes, where we felt around, remembered the storyline and just had fun with the idea. It was a different approach to an ending of an episode and I really appreciated it. Sure, the final episode was full of plot holes and messed around with time travel a little too much, but it was fun. And then it ended early, so we could spend the last twenty minutes with Matt Smith acting with every bone in his body. It was a brilliant end to the season. Watching it again for the fourth time last week reminded me of how great the script actually was. If Matt Smith left on this note, I would not have complained. I thought it was an interesting concept and loved how the story tied in with the rest of the season. As it stands, we were allowed for the Doctor to make a triumphant return and it was one of the most euphoric moments in British TV.

Final Verdict: Doctor Who fans will not be disappointed at this fresh lick of paint on the season. Matt Smith is tremendous as the Doctor and the overall season arc is terrific. Everything we wanted from the season.

3 thoughts on “Doctor Who – Season Five: The Review”