When that first teaser trailer of Christopher Robin dropped, with Ewan MacGregor’s middle-aged Christopher Robin faced with the live action version of Winnie the Pooh, the world got that little bit excited. But even while we were all quaking in our boots about the idea of Winnie the Pooh, with Jim Cumming’s vocals so on point, it was as if Sterling Holloway rose from the grave to give Pooh one last hoorah, there was this niggling feeling that Forster’s film was little more than an experiment. 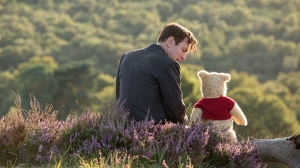 It is an absolute delight that Forster’s final cut of the film doesn’t feel so much like an experimental reunion fan fiction, but just another outing with the gang. While it starts very un-Winnie the Pooh-like, with Ewan MacGregor’s office worker struggling with budget cuts and a family he is drifting away from, but as soon as it hits the characters we know and love, it becomes something more akin to the Winnie the Pooh we remember. If anything, it comes across as a story of Hundred Acre Wood, spent focused on Christopher Robin and his life outside of the Wood. The light humour is still there, the sweet moral lessons still put a smile on your face and the detail to character is spot on. While Jim Cummings’ portrayal of Pooh and Tigger is almost identical to the original appearance, the other characters are clearly handled by different actors (there isn’t really any hiding Peter Capaldi, is there?) But it turns out that doesn’t hurt the experience, because there is so much attention to what makes every character tick, you get swept up in their journey anyway. Eeyore still steals the best laughs, Piglet is still a bubbling mess of anxiety and Rabbit’s OCD tendencies are hammered home with efficiency. This perhaps is Forster’s greatest strength as the director of Christopher Robin: he understands what needs to be done to make this movie tick. The entire movie screams a trip down memory lane, especially with Forster using the key points in the Winnie the Pooh canon for some well-aimed prods of nostalgia. The very first Disney Pooh story about the bear getting trapped in a burrow is referenced. Christopher Robin falls down a pit they once dug to trap Heffalumps. But the new stuff falls into the same tone we remembered as well. Winnie the Pooh’s charm is that he is consistently sweet and well-mannered. You may have forgotten about him, but as soon as he returns, the memories come rushing back. And unlike most reunions, he lives up to expectations in a fine fashion. The simplest of phrases can create an emotional surge in the pit of your stomach. Forster’s picture is tremendously moving without even trying.

Obviously Forster has borrowed a few script notes from the Paddington reboot, especially the key one that helped the two Paddington movies thrive: keep things simple. For that reason, Christopher Robin is not a film about a grand conspiracy that forces Winnie the Pooh into the real world. There isn’t some life or death situation to be fixed. The closest thing this film has to a villain is Mark Gatiss’ smarmy boss. And the crux of this film doesn’t involve the destruction or death of anything; simply Winnie the Pooh accidentally being in the right place at the right time to remind Christopher Robin of the true value of life. The simplicity of this story might frustrate some, as the film drifts along merrily, rather than creating anything overtly dramatic to race the story along. It even mocks those hoping for grand explanations – Winnie the Pooh is suddenly able to enter the real world, because he was “meant to”. It will wind the hell out of those hoping that Christopher Robin was imagining his childhood toys down to a mental illness and likely send the movie mistakes guys crazy, as Winnie the Pooh and the gang manage to get through London, only being spotted by extras when there is a joke to be had. But those people hanging on for the logic of the story to start making sense will miss the essence of the movie. Forster’s argument here is that this is the whole point of the film. He lovingly builds Christopher Robin around the fact. The bright, enthusiastic cinematography. The sparky performances. Even the casting of MacGregor, channelling his older films like Moulin Rouge to perfectly capture the Englishness of the story, is a fine piece of the machine Forster creates here. Simply put, Christopher Robin is a beautiful, beautiful film. This movie is likely to be forgotten about as soon as Infinity War comes out on DVD next week, but perhaps Christopher Robin is the more important movie event of 2018.

Final Verdict: Anyone who isn’t taken in by the joy, emotion and excellence of Christopher Robin must be an audience member with very little brain.