Say what you want about Judd Apatow’s brand of comedy and its main flaws (an over-stuffed length, cameos that don’t quite fit, jokes that need editing out), but it does seem to have improved the comedy genre as a whole. While this isn’t directed by Apatow, as with such films like Knocked Up and Trainwreck, it does stem from his brand of comedy. He casts actors in roles that are probably a little bit too comfortable in (P Diddy as a tough guy, Russell Brand as a bi-polar problem celebrity), and works to harness what they have already mastered, rather than giving anything new to do. This means that these films are often comfortably predictable and precise in their delivery.

Get Him To The Greek takes the supporting character of Aldous Snow from Forgetting Sarah Marshall and gives him his own movie. Other than a single reference to Kristen Bell, the previous film is hardly mentioned, instead simply using the fact the story is based of an already-established character to dive right into the gags. Russell Brand takes to the role of a crazy party animal as easily as you would expect him to, a drug-obsessed man-child who acts out every passing whim that crosses his mind. Even his nicer, soft moments aren’t entirely trustworthy, because they could just be another passing worry. The story throws him together with Jonah Hill, at peak Hill, playing a record company employee who is tasked with getting him from his London home to a gig in LA. To call the movie a simple road trip movie getting from A to B would be a slight disservice to the film, but for the most part, that is what it is. Brand drags Hill through several parties, nightclubs and bad decisions on his convoluted direction to LA, as Hill pretends he has the super rock start under control. It is a simple enough tale and one prime for director Stoller’s comedy. Brand opens himself up for some self-depreciation, as his bad boy persona is openly mocked and used as a butt for most of the film’s jokes. The film lives and breathes on some of the funny scenes it comes out with. A furry wall is a show-stealer for a scene that just piles on laugh after laugh. Pop culture references are openly mocked. And Jonah Hill being forced to smuggle drugs up his ass for Aldous is handled with the right balance of gross-out humour. That being said, there are just as many jokes that feel off. There is a casual rape scene which isn’t just offensive, but holds no bearing on the plot, resulting in an unnecessary hollow note in the film. And a threesome punch-line to a dramatic scene that probably didn’t need a joke feels awkward. The joke carries on out, but no one seems sure of where to take it, so the gag fizzles out without a punchline. 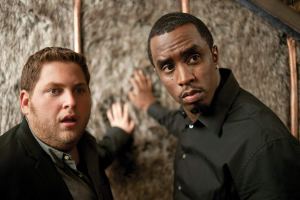 Therefore to decide how good Get Him To The Greek truly is, it turns to the sub-plots and emotional back-story to confirm the verdict. It wisely doesn’t spend too much time on drama in a film that doesn’t quite need it. Jonah Hill is amazing enough here, without needing too much of a weighty sub-plot. This, sadly, does mean that Elizabeth Moss, playing his weary on-off girlfriend, gets a wasted role, which is a shame, as she is arguably the most talented actress in the cast. On the whole, she just isn’t needed here over than a face at home to ground Jonah Hill’s character arc as he is roped into the wildness of the narrative. Russell Brand, on the other hand, relishes some fleshing out. We know he can do the fun stuff – he did it two years ago with the same character in Forgetting Sarah Marshall – but it is the emotion that proves whether Brand is worth applauding. Stoller does well to show a beating heart to the actor, getting across his idea with surprising subtlety from Brand. It’s the small moments of kindness, the hesitations between outbursts… There is more to Russell Brand than the mad caricature of Aldous Snow. In the final beats, where his world is blown apart by a revelation at home (let’s also take a moment to appreciate Rose Byrne, who is unrecognisable as an over-the-top British pop star), there is genuine emotion here. It’s nice to see hiding amongst the dick jokes, drugs and casual racism.

Final Verdict: Nothing overly unexpected happens, but Get Him To The Greek is a solid and bright comedy from Stoller.

One thought on “Get Him To The Greek: The Review”