There was a time when I truly loathed musicals. I simply did not see the benefits in breaking apart a solid narrative to sing about what was happening. As my understanding of cinema and story-telling grew, I saw that the genre had its place in the world of film, growing to admire a handful of them. Recently Moulin Rouge blew me away and I was swept up in the hype caused by The Greatest Showman along with everyone else. However, films like Mamma Mia reawaken that disdain I used to have for the musical, reducing me back to that miserable audience member, grumbling at how yet another song is pulling this story down into the dirt.

I guess Mamma Mia stems from a sub-genre of musical I simply never got onboard with. Based on the hit musical, Mamma Mia, for those of you who have either been living under a rock or who haven’t figured out the cryptic movie title, is a musical worked solely around the songs of ABBA. I am going to leave my personal feelings about ABBA aside for the purposes of this article, and simply discuss my feeling about musicals worked around a single band. I am not writing them off altogether, I merely feel that the writing team need to be aware that they are making their job that much more difficult. With a musical based around unoriginal songs, you must cleverly weave the music into the narrative, so it segues together so smoothly, you almost forget that the song was written ages before the script was. It is possible with something like Rock of Ages where the writers have all of the 80s rock music genre to choose from, but with Mamma Mia, the team only have ABBA songs to pick from. At first, this seems like a fairly straightforward task – ABBA have dozens of popular songs and even their backlogs have catchy tunes and lyrics strangely embedded into your memory. Some of them are even a perfect fit for a dramatic movie scene, one of the highlights of this movie being Meryl Streep ripping into ‘Winner Takes It All’ with the kind of power only a seasoned actress like herself could manage. But Mamma Mia constantly feels like a film with its hands tied behind his back with the need to cram an ABBA song into the mix. For example, if Mamma Mia didn’t get around to using ‘Dancing Queen’ riots would likely be had in the street, but do you know how hard it is to squeeze those lyrics into a film about a plain family living on a Greek island? To make matters worse, this is a film that feels the need to constantly be hammering in a song. Other modern musicals like Beauty and the Beast and The Greatest Showman let their stories breathe outside of the music, which both gave the actors time to shine and also made you look forward to the songs when they finally came around. Mamma Mia is almost always playing some kind of song, meaning that the story feels a slave of the music, rather than the music highlight the emotion. The end result is a film that feels like a speeding train no one quite has control of. 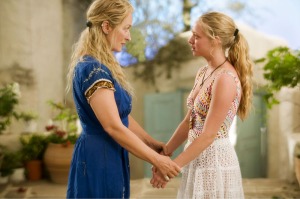 It’s a shame, because this speeding train takes down quite a few decent actors along the way. There are enough names here to get you really excited about this movie, but almost all of them are wasted. The three potential fathers are all given to actors that would usually get you excited. However, here, they are let down. Pierce Brosnan flushes a healthy career down the drain by starring in a film widely regarded as one of the worst performances in a musical. The man can’t sing and while his performance is self-depreciating at this fact, the joke doesn’t quite translate. All that the audience know is that Brosnan drags down a handful of powerful ballads with his dreadful singing. He has so many songs the audience are left wondering why the producers didn’t just cast someone else. It is a shame, because when delivering the dramatic lines, Brosnan brings the goods, small patches of warm charm gluing the chaotic screenplay together. In fact, while their singing is hardly disastrous, Skarsgard and Firth suffer the same fate. There are glimpses of a strong understanding of character in quiet, softer moments, but they are lost in the rush to get to the next song. At least they have characters, unlike Dominic Cooper who seems only to exist to sing ABBA tunes with his shirt off. It is hard to see what attracted the fantastic Meryl Streep to the script, who feels wasted on a thin character. With the songs not allowing Streep to add her usual dynamic to the part, she comes across as a bored housewife, forced to relive her sordid past and sing a few songs. Mamma Mia might mark Streep’s career low point, a punch in the gut title for any film to hold. It feels like everyone is fighting against the current of Mamma Mia, rather than the musical working holistically. If you want to see a bunch of famous people singing ABBA songs, then Mamma Mia has the perfect film for you. But anything more is sadly not on offer, only a few moments worth complimenting. Greece has never looked so pretty on film and a dance number for ‘Voulez-Vous’, with Amanda Seyfried trapped in the swirling crowd of familiar faces, smartly highlights how conflicted her character arc has become. However, otherwise, this is simply a bunch of songs stapled together with a thin story. Pass.

Final Verdict: A glorified two hours of karaoke dressed up like a movie. How it garnered such an impressive cast remains a mystery?