The last time a franchise was entirely gender-swapped, there was a fair amount of controversy. Regardless of whether the Ghostbuster’s female reboot was good or not (it was!), the entire reception was so steeped in gender political arguing that it became impossible to get a decent conversation going about its quality. However, determined to prove that anything male actors can do girls can do better, here we have yet another franchise with a gender take-over. 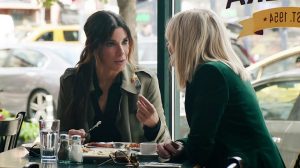 Right from the starting grid, tinkering with Ocean’s 8 rat-pack routine is an easy mountain to climb. Ghostbusters was such a classic, a male-cast rebooting it would have likely gone down like a ton of bricks in equal fashion. Truthfully, the Ocean’s franchise has nowhere near the fanbase and, with two shoddy sequels to its name, was actually in dire need of a frantic fresh lick of paint. In come the girls and what a cast Gary Ross has assembled to replace the likes of Clooney, Pitt and Damon! Sandra Bullock is an actress that I have never quite understood the fascination with, but here she fits the part like a glove. She bleeds cool, delivering her lines with a deadpan sharpness that has all of the women in the audience dying to be her. There may be a fair few complaints saying that Bullock gets away with simply tapping into her star charisma and coasting by on personality. But isn’t that the whole Ocean’s style? George Clooney and Brad Pitt did little more than show up and ooze character, so surely the women can be forgiven for doing the same. They are given vague traits to cling to and other than that, they are told to keep their line of thinking fairly in the box. It works. Ocean’s movies have plots so fast-paced that there is no time for any of these talented actresses to do too much more. Rihanna provides the dry sarcasm as a computer hacker. Mindy Kaling appeases the fans with her quirky comedy timing. Helena Bonham Carter plays a scatty Irish fashion designer, borrowing heavily from her previous works. And Cate Blanchett is the coolest woman on the planet. But it is tricky to moan about all of this, when it is so much fun watching these girls do their thing. If you are judging this film based on how many women out there are – perhaps not inspired – but made proud to be represented in film in this way, then Gary Ross’s Ocean’s 8 is a great success. The only actress who really lets the team down is Anne Hathaway, as the movie’s villain. She is fairly naff as a spoiled actress, who is pampered by everyone around her. For one, Hathaway’s Daphne isn’t quite the mark of the heist, merely one more obstacle in the way of completing the theft. Therefore, there isn’t quite that entertaining target painted on her back that fuels a lot of these Ocean movies. But the bigger problem is that she just doesn’t have that same intimidation factor that Andy Garcia brought to the first movie. You never get the impression that Debbie Ocean would be overly scuppered if Daphne twigs that something is up. Even a late act show of resilience from the character doesn’t quite make Daphne a worthy nemesis for the gang. Thankfully, Ocean’s 8 is so quick-paced that one duff character doesn’t really slow the momentum down to a noticeable level. 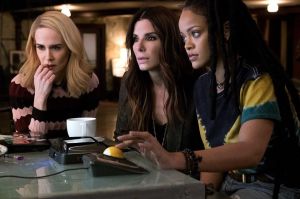 Outside of the performances, we are left to judge the story. Ocean’s scripts are a strange beast, because on one hand, they need to be deliriously clever. A great heist movie constantly pulls the rug from our feet, twists our expectations and reveals the heroes to be bloody clever. Writing these movies must be a masterclass in timing, research and pace. One dull beat and the entire intelligence of the movie is destroyed, like a fragile house of cards. Yet, despite the smarts that go into making a script of this calibre, it is strangely second-hand to the success of the movie. The story needs to be smart, but blend into the background. Cate Blanchett’s prowess as a con-woman is second to how funny and charismatic she can be on-screen. The movie cannot rely on the audience keeping up with the action. Sadly, this does mean that audiences will pick up on trends. The biggest trend here is that Ocean’s 8 is painfully identical to Ocean’s 11. It is done so broadly that it must be an intentional decision on Ross’s part, and I can see understand the line of thinking. Ocean’s 12 and 13 meddled with the narrative too much and those sequels ended up losing that charm the original movie. Falling back on what was safe, especially with the controversial gender swap, must have been a solid plan. But there are just too many similarities. The movie commences with an almost identical opening shot of Debbie convincing a board of parole officers to let her walk free. Then there is an impossible heist that needs a set of skilled individuals. Cue sub-plots involving ex-lovers, celebrity cameos and a surprise helping hand. Ocean’s 8 is following a check-list, which hinders the enjoyment of the piece. There are a few dud notes too. The epilogue with James Corden’s insurance investigator feels like it belongs in another film. And, while I appreciate the addition of Richard Armitage as the ex-boyfriend who framed Debbie in the past was likely meant to be a more literal example of the women beating the boys, it does feel slightly sad that this feminist blockbuster is reduced to a story about a girl getting revenge on a man who done her wrong. Again, an Ocean’s movie can survive with a slightly average narrative as long as it captures that sense of fun. It is far too early to tell if Ocean’s 8 has beaten the original. That opinion will take a few more watches and the test of time to confirm. But, at this early stage in the review, Ocean’s 8 is definitely the strongest of the sequels.

Final Verdict: Ocean’s 8 applies a gender reversal with such a smooth transition, it barely registers. All that remains is a fun blockbuster that impresses.