While most Disney remakes are attempting to make the classics more feminist, Winter’s War decides to get rid of the leading lady and make the story all about the handsome male hero. 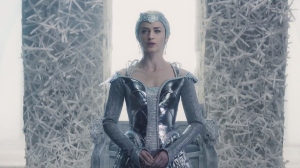 As far as Snow White sequels go, Winter’s War is a pretty naff entry. For one, Snow White isn’t even in it. Technically, few audience members will quite miss Kristen Stewart’s stoic performance, but it definitely gives this sequel an uneven-footed tone – it feels like the parents have left the house and the supporting characters are trying to throw a party. It also has the problem of not truly developing any of the figures from the last film. Hemsworth has a deeper origin story, but other than a love interest, he doesn’t really change too much from the roguish macho-man with a dodgy Scottish accent. The film puts all of its chips on brand new characters. Emily Blunt plays Ravenna’s sister who, after a prologue that turns her sweet sister character into an aggressively hateful monster, banishes falling in love from her kingdom. Jessica Chastain plays a hardened Celtic warrior. And Sheridan Smith steals the show as a female dwarf that fills the movie with amusing insults and comical retorts. However, one of my bigger issues with the new sequel is that Cedric Nicolas-Troyan’s choice of plot revolves around the magic mirror, killing that interesting little theory that the mirror was in Ravenna’s head. Mind you, as its own little fantasy movie, Winter’s War isn’t half bad. The best way to get enjoyment out of this movie is to remove the Snow White origins from this. Picture Winter’s War as its own original movie. Seeing as it only truly rides off of the last film’s material with the Magic Mirror and a third act twist – which improves Winter’s War dramatically – it is easy to pretend that Winter’s War is its own beast. Blunt makes for a gripping baddie, enough heart under the Ice Queen routine to lift her from the depths of a substandard sequel antagonist role. And there is a fun mid-movie set-piece where the team take on a horde of Goblins. A straight sequel of Snow White would never include a Goblin side-plot. The narrative ends up becoming quite fun with a handful of fun rug-pulls and twists. And while the character arcs are pretty predictable, there is some sweet moments from a cast that succeed in making the proceedings quite fun.

Final Verdict: Terrible sequel, good movie. Winter’s War is a confusing entry for sure, but when you are knee-deep in the action, you stop caring about the problems.

One thought on “The Huntsman – Winter’s War: The Review”