Director: Ron Howard
Cast: Alden Ehrenreich, Joonas Suotamo, Woody Harrelson, Emilia Clarke, Donald Glover, Phoebe Waller-Bridge, Thandie Newton and Paul Bettany
Plot: A young man (Ehrenreich) escapes the crime-ridden world of Corellia but leaves his childhood sweetheart (Clarke) behind. His target of raising enough money to come back for her draws him into the world of crime and smuggling.

Hollywood has its fondness of franchises. With Infinity War currently smashing the box office to pieces, it is easy to see why. Infinity War could have been a load of nonsense and drivel and it still would have had the same profit, simply because Marvel have created a chain reaction with their films. The serial nature of their movies have created a strong fanbase. Star Wars arguably could be seen to be doing the same with their universe. If the main trilogy is the equivalent of the Avengers movies, the stand-alone entries make up the likes of Iron Man or Black Panther. However, the big question is how those movies fit into the fabric of the production company? I have already written my opinion on movies being made for movie’s sake. The whispers of an Obi-Wan origin story confuse me, because weren’t the prequels technically that story? And while Boba Fett has his own array of stories, isn’t he best suited to being a prominent supporting star? Rogue One worked because the choice of that story was strange, off-beat and fascinating. Examples like that film prove that Star Wars can make this work. However, a Solo origin film feels like slipping into predictability. Name-checking Chewbacca and Lando feels like easy film-making. As Ron Howard’s entry into the Star Wars movie rears its head, one enters the cinema with doubt. 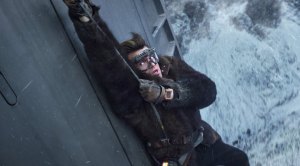 So, which is Solo? A lazy cash-in to keep the Star Wars train going? Or a clever extension of the Star Wars universe? Honestly, the writing process probably started out as the former, but somewhere along the way (the director issues on this movie make it impossible to tell where), someone pulled it around. While this movie is definitely trapped in the forced structure of being a Han Solo origin story, it definitely feels a lot better than it could have been. While current debates are usually surrounding what was better, The Last Jedi or Solo, the truth is that the pair of films compliment each other. The trilogies are darker, heavier affairs – especially considering the weighty material in The Last Jedi – while Solo appears to be more fixated on a sense of care-free fun. Ron Howard’s movie is all about bringing some jaw-dropping spectacles to life and simply entertaining the audience. Lazy is definitely not on anyone’s mind. It would have been easy to set Solo on Tatooine facing off against the familiar faces of Jabba the Hutt and Boba Fett. However, Howard creates several interesting planets, characters and set-pieces. There is always something exciting and new to discover in Solo. The trailer and marketing centre around the film’s most impressive adventure – a gravity-defying train heist across a mountain – but there is far more to add to the list. The Millennium Falcon makes it way through a maelstrom in space. There is a rebellion in Kessel’s salt mines. Just when you think that the Star Wars producers might just start to ride off of past glories, they push that extra mile and do something interesting and new. Yes, there are nods of nostalgia throughout the film. It would be criminal to make a film where Han Solo bumps into Chewbacca or Lando and not have a moment of cheesy fun. But compared to Force Awakens, which used the past as its USP, Solo merely nods to its predecessors in an amusing manner. Besides, it introduces more than enough interesting supporting parts to make the references worth it: from Woody Harrelson’s shady conman, to Paul Bettany’s menacing gangster villain, and, best of all, Lando’s droid companion, voiced by Phoebe Waller-Bridge, who is constantly appealing for Droid Equal Rights. Waller-Bridge is a relatively new actress, yet she is one of the stand-out performers here, winning her way as some fans’ new favourite. The story is the usual Star Wars material; you get the impression the action scenes were written first and the plot is more about tying everything together than being the main priority in the production meeting. That being said, it does surprise in the final third. Perhaps too much. A twist is always fun, but Solo boasts about three or four rug-pulls right at the end. It will definitely get the fans thinking. For the most part though, Solo is focused on having fun. And in that regard, it has succeeded.

Final Verdict: Statistically, this film should have failed, but you never tell Solo, or Ron Howard it seems, the odds.

One thought on “Solo: The Review”