If, in some crazy dystopian future, musicals became some form of highly addictive drug, Moulin Rouge would be the most lethal stuff on the market. Baz Luhrmann, famous for embracing this artificial craziness and using it to tell some of the greatest stories throughout literature (Romeo and Juliet, The Great Gatsby), creates an outlandish display of musical cheesiness that unashamedly hits the spot where it comes to living out soppy love stories, where star-crossed lovers sing their hearts out, while no-good rich men try to get in their way, twirling their pantomime moustaches in a dastardly fashion. Luhrmann’s film is a silly love story, but wears that fact like a badge of honour. 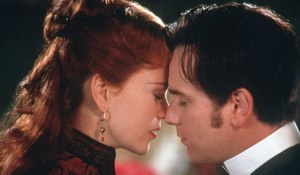 Take the casting of Ewan MacGregor and Nicole Kidman. You have to cherish the thought of a musical to get on board with these pair as the leads. Their singing isn’t the modern day musical vibe, where the actors aim for a more pop star beat to draw in a younger crowd (Hugh Jackman in Greatest Showman, Pitch Perfect), but as old-fashioned as they come. These pair can sing their lungs out, Macgregor especially impressing with some incredible notes being hit, but it is the kind of singing that has no time for bridging the gap between the unsure musical fans dipping their toe in the water and the diehard aficionados. Taking songs of the time (Elton John, Rhythm of the Night, The Police), and breaking them down into love ballads, the singing, to people not used to this kind of kitschy movie, is all but unbearable. However, if this is exactly what you adore in a movie, then Luhrmann has provided you with the perfect foil for your tastes. Ewan MacGregor not only impresses with his vocals, but with the characterisation in between songs. He plays Christian, like a poor fool who is wrapped up in a situation he cannot control. He is a fish out of water, who manages to just about land on his feet, when he lucks out into a romance with the mesmerising Satine, but he is willing to hang onto that love for as long as he possibly can. He is easy to root for, with his earnest eyes and his ability to play on the funny side of the story without making a fool out of the plot. One scene where he speaks the lyrics to Elton John’s Your Song to a writhing Satine, who has totally misunderstood the situation, is truly hilarious and a great early scene to make you fall in love with the film. However, Moulin Rouge has always been remembered for Nicole Kidman. From her first iconic appearance, coming down from the ceiling in a majestic swing, Satine is the gorgeous, conflicted and enchanting girl at the centre of this love story. She starts off making every audience member fall in love with her, with a tremendously fun handful of musical numbers. However, when the se appeal is shrugged off, Kidman still has plenty of tools as an actress to use. Her story is a tragic one, a struggling actress selling her body until her dreams come true. As a slight, and probably fruitless, opportunity appears, she must choose between a fleeting moment of happiness and her far-fetched dreams. And then there is, of course, the fact that she is struggling to hold a performance without sinisterly coughing blood…

This is a remarkably busy film. From the moment we have moved away from a framing device (MacGregor writing his adventures from a year in the future), the film rarely lets up. The first five minutes of the film feature Macgregor meeting up with a rag-tag theatre company, downing a bottle of absinthe and hallucinating Kylie Minogue as a twerking fairy. The editing style of this film is astonishingly frantic, zipping along at a brisk pace and rarely giving the audience a chance to catch up. It is in fine effect in the bigger scenes (the first entrance into the Moulin Rouge, a theatrical production), creating the impression that events are moving too fast for anyone to control. It also builds this sense of magic realism to the venue, as if Christian has walked into a totally different universe. As club owner Jim Broadbent and Nicole Kidman whip around the stage, they seem like they are from another dimension, surreal in their movements and mannerisms. The chaos is highly addictive. The edit of the film also means that whenever a dud beat crops up, it is largely forgotten like supporting characters who don’t really do anything or a villain that is pretty weak, only really here for narrative purposes rather than a genuine sense of threat (which is a shame as some of the darker tones of the movie would have come alive with a more serious performance). But as I said, these flaws are forgotten as soon as they happen, because Luhrmann has already sped along to the next moment in his remarkable movie. However, the frantic editing style also gives the slower scenes beautiful poignancy. When the camera settles on a moment, we get its full attention. This works wonders for building this heart-breaking love story between the two leads, which would have become lost under the visual assault on the audience in the hands of a lesser director. Thankfully, Luhrmann seems to decide that you don’t actually have to choose between style and substance, giving us heaps of both. The end result is a musical number that has embedding itself into cultdom and is ferociously defended by its fans. And, as of now, this blog.

One thought on “Moulin Rouge: The Review”