Magic Mike’s sequel has a massive problem from the start and that is that the very idea of it contradicts Soderbergh’s original film. The first film charted a story about a group of male strippers, believing that they were living the good life, but as they fell deeper down the rabbit hole, they realised their lives were hollow. It was a clever movie that subverted gender roles and pushed stereotypes in interesting directions. However, as the second movie begins and, out of the game, Tatum is lured back into the fold to kickstart his dull life, the script begins to make out as though every life lesson learnt in the last story is water under the bridge. The gang instantly hit it off once more and start on an amusing underdog road trip, where they, in some perverted reinvention of the Pitch Perfect series, head upstate to try and be the best stripper team in the world. Not only are the darker side of the stripper world ignored and never brought up, but the movie goes as far as explaining how important their roles in society as strippers are. Donald Glover plays a new male stripper they meet on the road, who sings to clients as he removes his clothes, and he truly believes that he is making the world a better place. As the gang meet up with female characters, their lives as strippers actually help them make honest relationships, rather than the last film, which argued that it was harder to form a meaningful bond with anyone, when your day job was taking your clothes off for money. It is the polar opposite of the last movie and throws everything you thought you knew up in the air. Truthfully, Magic Mike XXL is simply making it up as it goes along, rather than trying to be overly controversial. Taking the theme of male strippers and deciding that the gender swapping is actually quite fun, director Gregory Jacobs rolls with that philosophy and throws any chance of a wider reading out the window. 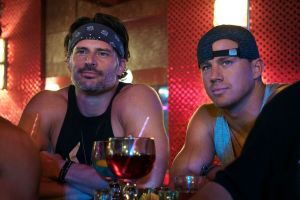 Frustratingly, the fun is addictive and, like it or not, you do get sucked into Jacobs vision. There is a sense that if Jacobs tried to create his own characters and make a separate movie about male strippers, this film could very well have worked. He wouldn’t have had to jettison the morals of the first film and could write his own arguments. However, without the Magic Mike name, he might not have guaranteed to millions he was bound to make and he wouldn’t have had access to Channing Tatum, whose dance moves provide this movie with its finest moments. It looks like Gregory Jacobs was aware of the problems his movie would have from day one, so resolved to knuckle down and try to push through. This movie will have its fans by the bucklet-load, feeding off of the hen do culture that will see thousands of girls’ nights in, across the world, buying this movie for a night’s entertainment. It is definitely a guilty pleasure and, as far as sexual awakening movies go, this is far better than 50 Shades, as there are large portions of Magic Mike XXL that promote female worship. Besides, when Jacobs wants to he can handle a decent scene. The finale is a great example of leaving any form of narrative behind, yet maintaining spectacle. While the Stripper convention is frustratingly without any kind of story – when it ends, the movie fades to a close without much form of conclusion – it is good fun with several neat stripper sequences. Let’s put it this way, Channing Tatum can definitely dance and this is probably Amber Heard’s greatest memory. Who says the acting business is all bad?

Final Verdict: Magic Mike XXL pretty much disregards the first film entirely and becomes its own thing. Absent of story, but big on guilty fun.