On the surface, Aronofsky’s latest picture is a film about ballet and the extremes dancers push themselves to achieve their dreams. That alone makes Black Swan a movie worth tracking down. Aronofsky films Portman’s career as a dancer in ballet and gives us a shocking insight into the grim realities of that world. The misconceptions of ballet dancers are young, innocent and carefree. Girls enjoying dance from a young age, socialising through their hobbies. In the space of a few short scenes, that stereotype is kicked out of Aronofsky’s picture and replaced with a darker, gritty truth. So far, so Aronofsky. We are treated – treated might not be the correct word – to close-ups of Portman’s feet after dance rehearsals, her toes cracked and damaged, every movement met with a sickening crunch of bones. As Portman builds up to the final performance, there is a massage scene where you can feel her body screaming out in pain at what she is putting it through. These dancers are eroding their bodies with every dance. Yet they are convinced that they are doing the right things, pushing themselves forwards and grinning with excitement at the idea of taking their self-destructive hobby to the next step. As Nina’s mother examines her bruised body, there is a sense that this horrendous habit is not seen as damaging, merely the done thing. Aronofsky also puts an interesting strand of story with Vincent Cassel’s foreboding director character. This plotline has taken an even more complex tone since the Weinstein scandal and the concept that male directors are pushing their female muses too far. There are two ways to read Cassel’s character each equally sinister. The first, more upfront way to view Swan Lake’s director is as a creep that is using these young girls as a means to fulfil a sexual fantasy. As he invites Nina back to his apartment and asks her about her sexuality, there is a sense that he is in the director’s business to appease some need for control over women. However, the other possibility of Cassel’s intentions is that he is simply exploring her sexual awakening to provoke some form of character out of her. As his hands glide up and down her body during dance training, it is suggested that he is only doing it for the benefit of the character. There is this sickening thought that, because he is the director and his actions are for the good of the theatre he is creating, his intrusive actions are justified. Perhaps worse is not Cassel’s casual harassment of the female characters, but the reactions of the dancers. Natalie Portman’s Nina is not fazed by the attention and as the performance draws closer, she viciously defends Cassel. Her rival dancers are either jealous of the director’s attention or encourages Nina to make the most of it. And Winona Ryder’s aged-out ballet dancer is suggested to have been chewed up and spat out by the director in the past, but hangs in the background of the plot desperate for one more chance to have the director be fascinated with her. It makes Black Swan a piece that has found renewed context, making it an even more controversial and thought-provoking picture. 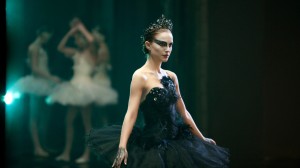 But, even if Black Swan works as an honest look into the twisted world of ballet dancers, that is not the film that Aronofsky is apparently trying to make. Black Swan goes far deeper than that. Nina’s dilemma in this story is that she is asked to perform twin characters in the latest ballet piece: The White Swan, the virginal and romantic girl trapped in the body of a swan, and The Black Swan, the darker, lustful, sexual second half of the character. Nina is a shoe-in for the part of the White Swan, the director in love with the way Nina can embody the vulnerability of the character and the complex, precise dance moves. However, Nina struggles to embrace the more chaotic, free nature of the Black Swan. She convinces the director to allow her a shot at the part in the casting process, but as the rehearsals continue to prove that she might not have what it takes, Nina is pushed further and further into the piece. It is here the narrative fractures in a very Aronofsky manner. As Nina descends further and further into the character, it is harder to tell what is real and what is fictional. As with most of Aronofsky’s work, multiple viewings aren’t just suggested, they are mandatory if you wish to truly understand and take in this film. Every new watch brings out something new in the narrative. Certain scenes find whole new meanings. The timeline of the story and Nina’s sanity widens. The end result is a terrifying Gothic tale. Everywhere Nina looks, she sees mirror images of herself, seeing alternative personalities or potential futures wherever she looks. Her mother resembles the failed dancer who missed her shot. Winona Ryder is her idol whose age has reduced her to a bitter and worthless shell. And Mila Kunis’ wildcard dancer is everything that the Black Swan needs, becoming both Nina’s inspiration and her main rival. The metaphor gets more and more broad, until by the end Nina finds herself confronted with her own, twisted image. The ending of the film demands if her road into insanity was justified, because it makes her the dancer she becomes. Is Aronofsky really talking about how the great artists can only create great art by suffering for it? 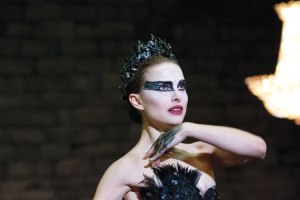 Whatever your reading of Black Swan, the one thing everyone has to agree on is how well it is made. Darren Aronofsky is one of the most exciting directors around. Even when you don’t particularly like his work, you have to admire his commitment to the cause. Black Swan, for me, is a film that celebrates cinematography. Aronofsky doesn’t take the easy way out of any scene, seemingly going out of his way to make his job even harder. Mirrors are a large part of Black Swan: they symbolise the idea of the doppelganger or Nina’s battle with herself. And to reflect that (now even this review is doing it!), almost every shot, if not every scene, has a mirror somewhere hidden in it. There are some shots of this film that must have taken a masterclass to prepare, as several reflections at once attack the scene. Ballet dancers gossip in a dressing room and it becomes harder and harder to tell what is real and what is merely a reflection. One scene in Nina’s bedroom and Mila Kunis’ character is only visible through reflections. It is all genius and even when you are rolling your eyes at the snobbery or showmanship of the director, you have just got to respect the talent. It’s not just the director, but the actress embodying the part. Natalie Portman is a hot and cold actress, sometimes beyond incredible (Leon), but other times, strangely detached from her work (the Star Wars prequels). but, for those perhaps doubting the relevance of the actress, Black Swan returns her to the top of her game. It is a breath-taking turn from Portman, as she pushes everything into the role. While Nina struggles to embody a dark character, perhaps Portman found art imitating life to get herself to that point. She looks decades younger than she truly is to, for this part, her character coming across ageless. She is painfully young here, adding to the dark nature and suffering of the story. If she is meant to be Portman’s age, the actress fills Nina with a youthful innocence and insecurity. Perhaps that is more fitting, a girl kept away from the horrors of the world by an overprotective mother and now being pushed to the wolves to become this twisted, horrible being. Again, this is a matter of the audience’ opinion. All that truly matter is how Portman transfixes you with this dark horror tale that pushes expectations and finishes as something truly original.

Final Verdict: Aronofsky’s works are never an easy watch, but it makes Black Swan no less impressive with a remarkable script, direction and leading performance.

One thought on “Black Swan: The Review”