Rampage is one of those rare delights that B Movie audiences get when their favourite brand of film-making (Sharktopus, Dragon Wasps – you know the type), gets a massive budget, worthy CGI and some charismatic stars. Suddenly, that guilty pleasure that draws them into watching the likes of the Sharknado movies is cast aside and they get to dive into a silly movie, heads held high. Sadly for the rest of the population, Rampage comes across as a brain-dead popcorn flick, where producers leave the script at the door and just have a big gorilla smash up a city. This is the place where screenplays come to die. 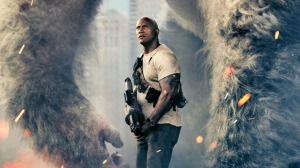 Except, Rampage is surprisingly well-written. No, it is not the smartest film in the world with plot holes so big you assume a mutant gorilla took a swing at the editing suite and certain characters written with no depth at all. However, the movie is self-aware of its own stupidity. The worse thing that could have happened is that we got another Godzilla, another movie about monsters fighting each other, but trying to make it an OSCAR-worthy drama. There is no dreary tone here or prolonged moments of character development. But Peyton realises that there is a middle ground between the cumbersome Godzilla and the mindless Sharknado. He keeps the daft plot with the usual mutant animal movie clichés: an evil organisation lose control of their experimental animals – and focuses instead on creating some characters worth spending time with. Enter Dwayne Johnson and Naomie Harris. Johnson is turning into one of the greatest action heroes of this decade, able to give audiences the best of both worlds: action hero moves without the generous edit and actual acting ability. He has saved daft movie ideas before (Fast and Furious, Jumanji, GI Joe), and he is the greatest thing Rampage has up its sleeve. He can both acknowledge the daftness of the plot and add levity where needed, but Johnson also is wise enough to know how not to play it. Naomie Harris is the bigger surprise on the cast list, seemingly content to come straight from Moonlight, where she tackled a meaty role full of depth, to being female sidekick in a monster movie. However, the film is better for it, with Harris being able to push aside the potential womanising that usually comes with this material and provides some smart support for the Rock. Both of these two put the villains of the piece (Akerman, Lacy) to shame, who feel like pantomime masterminds, their dialogue over-played and cheesy. The script channels its efforts into bulking up the relationship between Johnson and the gorilla of the movie. George, an albino gorilla who Johnson saved from cruel poachers, provides the emotional core of the movie, depth added early on to make those silly CGI moments in the final third feel more worthwhile than mindless carnage. Infected with a serum to make him uncontrollably aggressive, the movie finds surprising humanity in an animal driven to hurting others in a situation out of his control. Anyone who has had their dog bite someone in the heat of a moment will feel the emotion pouring from this script. And with King Kong under the audience’s belt, we all know the worst case scenario, added a meaty bit of suspense to the build-up. 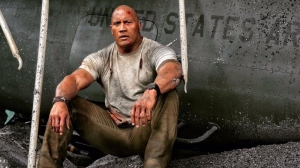 At the same time, Rampage isn’t about to fall into Godzilla’s trap and become a wallowing examination about grief and loss – the drama only adds a backdrop to a big, dumb movie. The scenes we were waiting for, seeing giant killer animals make short work of a city, are handled just as precisely as the characters. Prolonged camera shots from above see the beasts wreak havoc with glorious clarity. A wolf leaps up and rips a helicopter from the sky. Gorillas eat the supporting cast. All three monsters climb the same skyscraper – a particularly impressive spectacle. Best of all is the giant croc who is kept in the shadows for most of the movie (predominantly seen as a shadow underwater). The biggest flaw B Movie monster movies make is showing their monster too early, killing off the suspense of wanting to see what the creature looks like. In hiding the croc and keeping audiences occupied with George and the wolf, Peyton gets the best of both worlds. The finale is a joyful scene of daftness, as silly as it gets, but not in a guilty pleasure sort of way. This fun is justified. Sure, it is only as good as a movie about a gorilla punching buildings could possibly be, but it is far greater than the premise suggests. I mean where else would we get The Rock quoting Moana at Negan?

Final Verdict: A film as dumb as this one was only ever going to be OK, but Rampage could have been a whole lot worse. As it stands, it is a delightful summer action.