Out of all of the video game heroes that we want to see done right in cinema, perhaps Lara Croft is the one that the fans crave the most. Badass, feminist but without trying and often coming accompanied with tremendous action… Sadly, the double bill of Angelina Jolie movies are passable efforts, mainly successful due to the name and franchise attached, rather than the content. As Alicia Vikander headed a long-awaited reboot, the chance for the Tomb Raider movie we all wanted seemed on the horizon at last.

The warning signs flared early on. A trailer confirmed the fears of the fans. The latest movie is based on the reboot of the games where Lara Croft was reinvented from her casually awesome self and into a young prequel starlet, before the tomb raiding kicked in. In fairness to the game, it won everyone over, even if it wasn’t the story we quite wanted. And that is perhaps the best way to summarise this movie. It’s good, but not the film the fans wanted. Take Vikander. She is the perfect actress for the role, looking like Lara at first glance, but dialling Jolie’s cheese factor down to a gritty realness. However, her Lara is modelled on the prequel Lara, plucky but lacking finesse, brave but making it up as she goes along. Her first appearance is made edgy due to the fact that we first see her losing a fight… The film’s flaws should not, in any way, be pinned on Vikander, who works miracles with the script. She provides an easy-to-root-for, charismatic heroine, who can handle the gymnastics required for the part with effortlessness. But, fans are queuing up for the movie to see a Lara who is less fighting for her life like a primal animal and more of a seasoned professional. Sadly, in the script’s own words, she isn’t that kind of Croft. However, in the grand scheme of things, this issue should be fairly minor. The game had the same issues and still landed a success with the majority of the fanbase. However, the movie completely envelopes the story of the rebooted Tomb Raider game, the producers almost blinded by their attraction to the cinematic stylings of the game. However, what they haven’t taken into consideration is that the game had a good 20 hours or more to tell the drawn-out story of an Asian curse on an island and develop the mysterious cult surrounding the tombs. The movie copies and pastes the script as best as they can, but trimming the content down to a post-it note. The remaining narrative is a hollowed carcass of the plot that came before it. Lara’s back story is condensed into “daddy issues” infuriating every fan who saw Lara as an independent female ass-kicker. Vikander’s heroism is constantly held back by the script asking her to make doe eyes over the dad she lost. 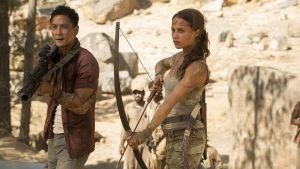 The end result is a film that isn’t too unlike a lazy student handing in a first draft of an essay, hoping that it’ll do. The action is impressively filmed, but in need of more complex choreography. Certain top moments are simply reworked versions of the game. Walter Goggins’ villain is pretty one-note. There is even a neat twist about Queen Himiko’s curse, perhaps the one original idea the movie has, but it is both a simplistic excuse to cram a new monster in and also strangely under-cooked. As soon as the new story development is introduced, it is forgotten, almost as though there are four solid scenes left on an editing room floor somewhere. However, despite being simplified, there aren’t even too many moments when the film takes a breather and simply develops the characters. Almost as soon as Lara reaches the island, after faffing about too long in a very un-Tomb-Raidery London, the plot races forward, so the simple pleasures of a Lara Croft film, like watching her climb a mountain, take on some animals or simply endure the environment are either missing or clipped to a token nod. There are two ways to look at this movie: on one hand, perhaps it was a few drafts or rewrites away from being the perfect movie. Spruce up the villain, realign Lara’s motivations, add to the action… However, there is another part of me, a much larger part of me, that thinks that the writers should have looked at the final copy of the script, torn it up and started afresh. Not for me.

Final Verdict: Poor Alicia Vikander is trapped in a ship at sea, leaking in water. The irony would cause a smirk, if the film deserved it.