Brimstone is a hard watch. Not because it is a bad film, anything but Koolhoven’s Dutch Western a thought-provoking, well-crafted thriller, but the content is not for the weak of heart. There are many times when the film threatens to cross the line of shocking and into bad taste. By the end of the film, you are unsure if the director is crass or artfully toeing the line in a tasteful way. For example, the actual events of this film are pretty horrific. All it takes is a blunt summary of what happens, especially in the final third, and Brimstone will likely get slated as an ugly example of mindless violence. But if anything, Brimstone deserves credit for touching upon this horrendous set-pieces without fully tormenting the viewer. To give an example would rob the viewer of some of the shocking surprises in store for them, so just bear this in mind: don’t go into Brimstone expecting a casual watch. 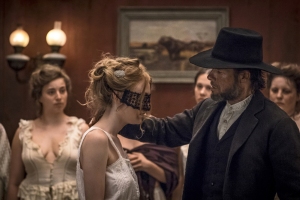 The story starts off delightful simple, but descends into something far more complicated and satisfying. Dakota Fanning is silently mesmerising as the lead heroine, a girl with a simple yet meaning life, working as a midwife, part of a loving family (on another note, third mute hero in a story – this has got to be the oddest film trend of 2018). One day, her world is torn apart when a new priest wanders into town. Before anything as soon as happens, we know something is afoot. As soon as Fanning sets sight on Guy Pearce’s grizzled priest, menacing scar and all, she shrivels up, terrified of the man. She tries to avoid him, but Pearce catches up with her and quietly promises her that his purpose in the town is to torment her, in order to get vengeance for something she did to him in the past. As the movie progresses, the town turning on Fanning, after she accidentally kills a baby she is delivering, we get the impression that Brimstone will be a slow-burning thriller, where this priest and mute woman play a cat and mouse game in this quiet Western town. However, Koolhoven’s movie is one that plays with expectations, before doing something beautifully unexpected. In this first case, he promises a drawn-out political battle, but delivers a shocking climax to his story before the first twenty minutes have played out. As we are left reeling at the surprising turn of events, the story is whisked away to the past, where a young girl, played by Emilia Jones, stumbles through the desert, dying of thirst, before she ends up being taken in by a brothel. We are in a totally different, although equally thrilling story. Of course, the two stories connect up eventually, although not quite in the way you would assume. And before we get to the bottom of the story, there is yet another flashback. There is a certain case of Memento going on here, especially with the presence of Guy Pearce, where we need to go backwards to fully understand where the story began. While you fear that this will stagger the movie, turning the pacing into an episodic crawl, rather than a pulse-pounding race to the finish, the breaking down of the story into four segments helps make the story easier to stomach. There are some grim moments here, like a man being strangled by a noose and Koolhoven forcing us to watch the life slowly be choked from the character, and in taking a breather to look at another part of the story, we get a chance to break from the horrors of what we are watching. That being said, few will argue if someone found it too disturbing to appreciate, especially near the end, when Koolhoven feels intent on showing us just how horrible the world can be. The message is clear: humanity is capable of some terrible things and darkness hides in the underbelly of society. Still, Koolhoven perhaps didn’t need to hammer it home so cruelly, with an ending that strikes a strange balance between heroically uplifting and coldly bleak.

Final Verdict: A well crafted tale of vengeance and mystery that definitely grips, but is, at times, too grim to be truly liked.