Picking your favourite instalment in the Dollars trilogy feels a little arbitrary. For one, while they arguably contain the same lead character (see my review of A Few Dollars More for the discussion of Eastwood’s part in the franchise), the three stories are so different from one another. One is a lone story about a man saving a town, old Western style, the other is a story about revenge and here with the Good, the Bad and the Ugly, we get a Western about three men, after some secret loot and trying to double cross each other to get to it. It is less a case of having a favourite and more of a decision about which story you fancy on that particular day. Besides, they all tap into that loving fascination with the Western genre, a beautiful reinvention of a tired piece of cinema and made gritty and suspenseful. Made up of wonderful shot vignettes, they bleed into one another in a thorough and glorious way. Leone’s quality film-making doesn’t let up for a second. 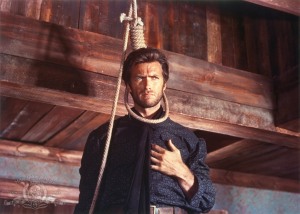 The Good, the Bad and the Ugly is the most iconic of the three movies. Part of that is down to an absolutely phenomenal soundtrack by the ingenious Ennio Morricone and part of it is the catchy title that sets in stone what this film is about. Yet does it really. What do we know about this film other than it contains a good cowboy (and even there Eastwood’s stoic cigar-chewing hero is rarely the epitome of a good man), a bad guy and an “ugly” cowboy? What does the film even mean by ugly? It makes for The Good, the Bad and the Ugly to be a wonderful exploration to fans of the genre as the story slowly unfolds and reveals its true game. It starts off as a film of two stories. On one hand, Lee Van Cleef (now playing the bad character, rather than his good hero in the last Leone Western), goes about slaughtering people he is paid to kill, uncovering the identity of Bill Carson, a criminal with a hefty sum of money to his name. Meanwhile, the film jumps over to the story of a convict, Tuco – played by Wallach – who strikes up a deal with the poncho-wearing Eastwood, we have grown to love over the course of these films. Eastwood hands Wallach to the authorities, collects the bounty and then saves him from a hanging, so he can do it all over again in the next town over. However, with the heat on them severe, Eastwood breaks off the arrangement, leaving Wallach’s Tuco a man at the mercy of every lawman and bounty hunter across America. As Tuco’s revenge mission to take Eastwood down rages across the desert, the pair of them stumble across a dying Bill Carson, whose last words pass on the location of the cache of gold that Van Cleef is hunting. With Tuco learning the graveyard the gold is hidden, but Eastwood knowing the specific grave, the pair of them are forced to work together to find the buried treasure, with the Bad cowboy, Van Cleef hanging over their shoulder.

This film is easily the longest of the Dollars trilogy, coming in at an exhausting 158 minutes, when watching the Director’s Cut. A lot of the running time goes on building up both the characters and the moments. Leone is a fan of milking the material for all its worth, which does make for some great scenes. As he spends time introducing us to his three lead characters, we get some tense stand-offs, where Van Cleef breaks bread with a man negotiating with his life or Eli Wallach being snuck up on, while he is in the bathtub. Those scenes are brilliant, because Leone is in no rush to tell them. One particular shot at the very end, where the three cowboys meet each other at the treasure site seems to last an age, but every moment is so pulse-poundingly filled with tension that every drop of suspense makes the thrilling moment even better. To a large extent, you wouldn’t have these lengthy segments any other way, because they do make the meaty moments so much better. Some might get annoyed how these big build-ups often lead to brief snappy pay-offs. Leone’s style is to get the suspense cracking up in gradual knots only for a conflict to be solved in a single gunshot. It must be said that out of all the dollar trilogy The Good, the Bad and the Ugly probably has the weakest climax, the resolution nothing quite as inventive as Leone has been with the last two Westerns. There is also a lengthy segue from the story where Eastwood and Wallach visit the frontlines of the Civil War. Leone has a more political agenda here than he has with his other movies. Perhaps at the time of filming, this gave The Good, the Bad and the Ugly the edge, but from a modern audience’s perspective, the discussion about the pointlessness of war partially dilutes the cowboy epic we have been given. However, on the whole, the Good, the Bad and the Ugly is a great addition to Sergio Leone’s canon. From Eastwood’s sharp thinking to the desperate deviousness of Eli Wallach, there is a lot to like about the final entry to the Dollars trilogy.

Final Verdict: While overlong in places, The Good, The Bad and the Ugly proves that Sergio Leone is the master of the quality Western movie.