Out of the endless remakes in cinema right now, one stood out from the crowd, mainly because how unusual it was. The Beguiled, as directed by Sofia Coppola. The Beguiled is a 70s anti-Western starring Clint Eastwood and directed by Don Siegel. It told the story of a wounded soldier winding up crippled behind enemy lines and needing to manipulate a school full of women, who were reeling from their first experience with a man. It is a very strange piece, thoughtful, if a little dated. In short, the last thing you would expect to be seeing remade in 2017. But this is what made it interesting. Feminist director Coppola dragging this story from the 70s. You would assume she has something interesting to add to the debate, making it up there with your priority watches this year. 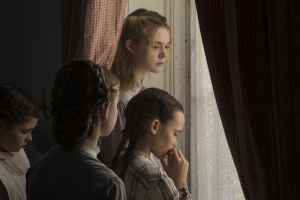 But the truth is that Coppola’s Beguiled isn’t too much different from Siegel’s Beguiled. In fact, there are times when you are pretty much watching the same movie. That isn’t to say that Coppola’s film is a bad one; yet it just seems an entirely pointless piece of film-making. Coppola updates the cinematography, adding it a keener sense of nature throughout (symbolism with spider’s webs, for example), and the performances are more fine-tuned. However, with the exception of minor fiddling, mainly a streamlining of the story, so several of the supporting cast from the original are cut, you might as well be watching the same film. Farrell wakes up in a female school and begins turning the women against each other, in order to stop them from sending him to prison as soon as he is healed up. The story still carries a level of intrigue, especially in the sense that the women make themselves victims before Farrell’s wounded villain has even started. Even unconscious, the women are thrown into disarray, stealing each other’s jewellery and sniping at each other during lessons. It is also nice to see better actresses in the role of the women, perhaps filling them out more. Kristen Dunst brings a subtle sadness to the character of Edwina, while Elle Fanning has more of a smouldering intensity than the last actress brought to the part. And while I am not daring to say who handled the role of John McBurney better, Farrell or Eastwood, at this early juncture, Farrell does prod the character into different direction, adding his own twist on certain scenes and dialogue exchanges. But these slight alterations are not enough to begin applauding a total modernisation of this film. Farrell recognising something he would do differently in Eastwood is just something that happens naturally, when a new actor takes on an established role. In the same way, two theatre productions of Macbeth are never the same, we were never going to get the exact same McBurney.

You allow the film to continue, expecting Coppola to suddenly jump in with her point. This is the kind of film, where you expect the director to simply disagree with the final thirty minutes, meaning that the Beguiled remake really comes alive in the end. Yet, it doesn’t really feel any different either. If anything, Coppola rushes it. She has trimmed half the story, but in taking her time in the beginning (while it is the same old story, Coppola’s film-making style is a lot more slow-burning – maybe she mistook that for ‘better’), she has to pick up pace at the end. Two of the film’s best moments are nowhere near as powerful as the original film, feeling oddly censored, which is the opposite of how a 2017 remake should feel. At the very least, I want the tastefulness removed, so we can see the horrific brutality of what happens. The only thing I really see Coppola adding is a sex scene, that might be meant to hammer home a point, but feels odd when it is one of the only new things added. As if Coppola watched the 70s film one evening and decided that it needed a good shag thrown in there for good measure. The only major emotional change I had between this and Siegel’s was the opposite of what I expected. I began to feel more strongly for Farrell’s male hero, which really doesn’t bode well for Coppola’s feminist standing. Eastwood presented McBurney as a chauvinistic douche, not bothering to correct the audience when he veered full villain. But here, when Farrell takes the swerve into monster, perhaps his performance is so three-dimensional and emotional, but he feels more like he is acting badly to a poor set of circumstances. He is definitely the bad guy, but the women don’t feel much better, pushing the man into reacting how he does. It makes for an odd tone, so when the movie drifts to a close, it doesn’t feel like just a pointless few hours of your life, but one where Coppola perhaps didn’t get the point to her own movie.

Final Verdict: The Beguiled remake isn’t bad per se, with strong performances abound, but it doesn’t feel particularly needed either, a lesser copy of the original effort.