The idea of Jumanji is one of those eureka moments, where it seems crazy that the idea hasn’t been done before. An adaptation of a novel from the 80s, Jumanji’s plot is delightful simple. Some bored kids find a board game in the attic of their new house. Whenever they roll a dice, a new jungle threat is pulled into the real world, putting their lives in severe danger. These threats range from poisonous mosquitoes to man-eating vines to much worse. However, rather than putting the board game down and running away, two generations find themselves trapped in the game. The only way to put the madness of Jumanji away is to complete the game. But with every roll of the dice, the game gets that bit more intense. 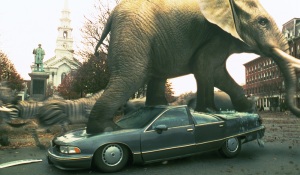 The film has its problems. The main issue is that the film does feel annoying episodic and trapped in a formula. The characters roll the dice, something happens, the characters roll the dice again, something else happens… the pattern is hard to shake off. In Johnston’s credit, he does his best to shake up the formula as often as possible. The dice-rolling is broken up by several problems opening up. A pelican steals the board game, Robin Williams’ character is arrested, the team have to find an old player from the past… As well as this, when a new creature is released into the world, they don’t just get beaten and go away. They hover around the edges of the plot. A group of monkeys are introduced early, able to pop to add comic relief to the plot, whenever feels begin to get stale. A lion also gets side-lined after his big scene to carry on creeping into the movie. It keeps things from getting too routine, but it is hard to not notice the rigid structure. For example, why do they keep on returning to the same house to roll the dice? Why not keep the game on the move, saving time on trudging back to the starting point after every tussle? The CGI is also pretty dated. At the time, it must have felt very crisp, massive stampedes filling the scene. There are some good animatronics, coming from the crocodile and the lion. However, at the same time, cracks are beginning to show in the fluidity of both the animation and the puppetry. The lion’s fight, for example, feels constrained by what the technology of the time could achieve. In a film that is clearly written to show off how far cinema has come, it is sadly starting to feel like one of those films that won’t hold up in about a decade. The other big problem is that, while Robin Williams is an outstanding casting choice, it feels like we have the actor on half power. Williams is best when he is allowed to have creative input into his dialogue. You want him to be swinging on vines away from a lion, while spouting off that gibberish nonsense that the actor is famous for. As it stands, he has the generic quips of a tired action hero. Still, he definitely counts as a plus for this movie. He brings a new energy that the likes of a more traditional adventure hero wouldn’t be able to achieve. It also helps he is surrounded by some very strong supporting actors. Kristen Dunst continues the prove the notion that she was a lot better before she hit puberty. Jonathan Hyde is asked to play it melodramatically, but holds a tricky part together.

But, despite all of the glaring problems it is hard to ignore with Jumanji, for the moment, it remains a solid source of fun. The adventure action is both delightfully suited to a younger audience, as well as being very non-stop. There is rarely a moment to catch your breath when the first roll of the dice happens. It is packed with the kind of scenes that just earn a squeal of excitement. The sinister silhouette of an arachnid crawling across a window, a car being torn in two by a vine, a lion that plays his own entrance music on a piano while moving in for the kill. It is almost impossible not to have some love for this movie.

Final Verdict: Age begins to sink in, but Jumanji still entertains with some cracking set-pieces and an amusing turn from Williams.