Hedda Gabler is a very tricky character to get right. Summarise the plot of Hedda Gabler without going into any form of depth and you almost hate her right from the off. A woman who marries a man she hates due to the pressures of society (although we argue these forced conventions are her own imaginings), and then, out of sheer boredom, begins driving the people around her to despair, insanity and death. She is a character who is hard to empathise with, because there are few moments where he motivations are made clear. Why does she do what she does? Is she a feminist holding her middle finger up to society? Is she holding out for a longer game that never reaches fruition? Or is she, as this particular production seems to settle on, bored and trying to spice up her life? Now that her own future is seemingly paved out in front of her, does she have a desire to make everyone around her fall into chaotic uncertainty? Whatever the reasoning behind the things she does, we are left with a loathsome character. Maybe that’s the challenge that brings so many theatre companies to this Ibsen play. Whenever a director or actor gets their hands on the character, they must push themselves past the given narrative and read between the lines. It makes every time you see a different Hedda Gabler intriguing: how are they going to approach playing the lead?

Lizzy Watts’ Hedda is a cat amongst mice. No, perhaps not mice, as the performance is more cunning than that. She feels like a housecat that has it out for her owners and guests to the house. Watts is never not on-stage, although she finds different ways of being both present and absent. We are introduced to her before we have even sat down into our seats, her back to her audience, absent-mindedly playing a piano. When the play begins, the characters act over her, as if she is not in the room. Throughout the entire play, she feels like a grumpy cat that no one dares wake. When she is about, she is maliciously taking swipes at the other characters, mocking stray hats left around the house and destroying a flower display for the bitter fun of it. Hedda Gabler seems to do things out of a casual curiosity about what the reaction would be. In the second act, she throws a prized possession into a fire, one of her most heinous acts, simply because we struggle to see the reasoning behind her cruel action. She does these horrible things and then lies back, waiting to see what happens. Watts keeps her movements feline as well, most of her time on stage, spent curled up on the floor or pacing around the room, eyeing up her chosen victims. What makes her actions even more unforgiveable are how little satisfaction she gets from them. Perhaps we could muster some sympathy for her if what she does actually seems to help her reach whatever goal she has concocted in her head. If trying to become a wedge between Annabel Bates’ Mrs. Elvsted and Richard Pyros’ Lovborg actually had some long-term form of happiness in it for the character, we could perhaps understand Hedda Gabler better, even if we never liked her. But the frustrating thing about Hedda is how little she gains from the horrible nature of her actions. As Annabel Bates is reduced to tears in front of her, Hedda gets a passing smirk and then is thrown back into her bored lifestyle. She turns to find someone else to torment. Her happiness comes from the journey, rather than the result. You get the impression that her marriage to the charming Tesman came from a mild fascination of what married life would be like, but now she is there, her attentions are beginning to turn. Lizzy Watts has to work extra hard to make his production entertaining, by trying to help the audience find any means to invest emotion in her character. She succeeds through humour, Gabler’s dry wit just enough to make us want to see what happens to the character. Will she find happiness? Will something finally satisfy her? Or will her quest for imagined beauty lead to her ruin? 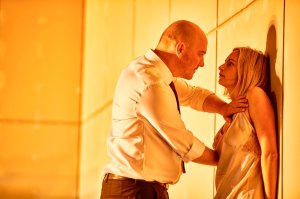 What we are left with is a fine adaptation of Ibsen’s play. The journey is interesting enough and the performances lend gravitas to the road to ruin we find ourselves trapped on. However, the play itself is one built on fine performances. The set is kept minimal (purposefully suggesting the emptiness of Gabler’s existence), and the lighting non-intrusive (although certain moments are subtly gorgeous), making the main focus the acting. And the acting cannot be faulted with fine turns from everyone involved. Abhin Galeya’s Tessman is an instantly likeable scholar, friendly, charming and someone you instantly feel sorry for as he becomes locked in Hedda’s game. Adam Best’s Brack is likeable too, although the story wonderfully slowly pulls down the curtains behind the character, revealing a harder figure underneath the smile and Irish dialect. Best of all is Richard Pyros, who has both the best role and the least screen-time, condensing his character’s anguish into beautifully wrought moments. His final monologue will blow you away. No, there isn’t one flat performance on show here, but with a play that is predominantly pages of dialogue and passing the two hour mark, you cannot help but think that more is needed to keep the play alive. There are definitely moments where the director, Ivo van Hove, has decided to add some vitality to proceedings. Hedda’s first outburst is done without words and wonderfully portrayed, especially when, afterwards, none of the other characters reference the destruction she has caused. It suggests that despite all of her vile crimes Hedda hasn’t had as devastating an effect on the lives of those around her, as she was clearly planning on having. But outside of these moments, there is too long spent on working up to the gritty pay-off. Points are beaten around the bush. Fun interactions between Galeya and Christine Kavanagh go on a touch too long. You are sadly grateful for the finale which goes for visuals, over words. Hedda Gabler, who has remained squeaky clean for so long, is caught red-handed (literally!), and her final moments are not as beautiful or poetic as she imagined they would be.

Final Verdict: Hedda Gabler is a tricky play to get right with a tough central character and a play that is a tad too wordy. National Theatre might stumble in the obvious places, but overall, it is a welcome Ibsen adaptation.