When someone touches a classic movie, especially a horror, the fans revolt. How many remade movies have we seen butchered in recent years? The Poltergeist movie was regrettably pointless. No one talks about Friday the 13th last entry? And I can’t think of a single person who is glad Nicolas Cage got his hands on the Wicker Man. Therefore, when someone mentioned that they were thinking of remaking Stephen King’s cult novel, turned 80s horror film, we were all appropriately worried. 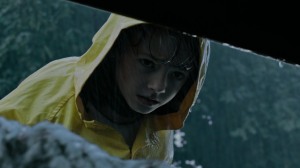 Maschietti sets the tone very early on. We all know the scene. If you hadn’t had it engrained into you, when Tim Curry first loomed onto our cinema screens, then you would have had a brief glimpse of it in the trailer. Young Georgie, probably cinema’s most memorable child red shirt, runs along a stormy street, a home-made paper boat sailing along in the water. It falls into a drain. Georgie reaches into the drain, only to find himself confronted with the iconic Pennywise. It is here we first experience Skarsgard’s take on the character. He cleverly decides to not mimic Tim Curry’s popular take on the character, who played it more creepy adult, luring children to their demises. Skarsgard is just as child-like as the children he is after, viciously finding amusement in his own cruelty, like a spoilt kid gifted with the power to inflict pain on anyone he desires. He also looks ten times more terrifying than Curry. Despite the changes to dialogue and performance, the scene plays out uncomfortably like the first one, the inevitability of what happens to poor Georgie clear from the off-set. But then Maschietti tears up the playbook with a gruesome punch-line, showing us far more of the attack than Tommy Lee Wallace ever did. We are left stunned and horrified at the brutality of the scene, one thing left decidedly clear. The rules are out the window. From there on, the 2017 It gloriously becomes a film in its own right. The scares are updated, some of the incarnations Pennywise becomes to scare the children wildly creative and darkly creepy. If you felt the comfort of knowing that Pennywise is supposed to be a bad 80s werewolf was going to save you from the spooks, think again. The unknown fuels the nightmarish experience that is It. Other moments are taken from the first film, but given a new lick of paint. Beverly Marsh was confronted with a bloody explosion in her bathroom sink in the 1990 film. Here, Maschietti takes that moment to brutal extremes, throwing his own addition to the scene, as well as leaning more towards Nightmare of Elm Street than It when depicting the blood. It could have been overbearing, a director simply making everything scarier instead of better, but Maschietti’s keen eye for art saves the moment from being mindless violence. Blood is also an important beat in his It; the final scene sees the kid take blood, used to spook them for the entire course of the movie, and use it to make them stronger. Moments like this make It feel less like a 21st century polish and more of an intelligent re-examining of the source text.

It’s not just the scares that Maschietti improves, but the characterisation. The smart move here is splitting It’s story into two parts. The novel was always a text with a clear interval. The kids of Derry take on this monstrous creature and 27 years later, they return to take it on again as adults. The first movie tried to tell both at the same time, resulting in a three hour marathon film that got too bloated in its second half, due to the sheer amount of story to get through. Here, we only have the first half of the story to worry about, as the children first meet this terrifying being. Machietti’s It is noticeably longer than most horrors too, beating the two hour mark by a few moments, strange when most popular horror films go for short and sweet. While a few might tire of the exhausting jumps along the way, others will appreciate that Maschietti finds time to mine the smaller details. The kids have just as many horrors at home, as they do in the sewers. The parent figures are given bigger roles here, so you understand why Eddie isn’t keen on spending time with his overbearing mother. Best of all is Sophia Lillis’ Beverley Marsh, a powerhouse performance from the young child actor. She is a woman, struggling with becoming an adult, especially when her father is determined to keep hold of her virtuous daughter image and everyone at school falsely accuses of her of being the school slut. It is shocking to see these narrative beats told about children of this age, but truthfully, this does happen. Hiding from the maturity of minors doesn’t extinguish the issue. It means that the long running time doesn’t feel as bad as it could have been, because we genuinely want to see what happens to these characters. There is no weak link that we partially want to see end up butchered by Pennywise. It also means that when the scare slow down, the movie doesn’t. Sometimes it is nice spending time with seven young kids enjoying their summer.

Final Verdict: It’s remake is impressively made, a scary yet thoughtful return to the town of Derry.

One thought on “It: The Review”