It takes an awful lot to make John Woo looks tame. Shoot Em Up’s USP seems to be to deliver high-octane, uncensored action that makes John Woo’s wackier entries look like an old-fashioned yawn fest. This movie marks the evolution of the stock action movie from the realistic style of actual action stars like Jackie Chan or Jean Claude Van Damme and into the domain of CGI blockbusters with trained actors at the helm. Your liking of this progression will depend on how authentic you like your fighting. 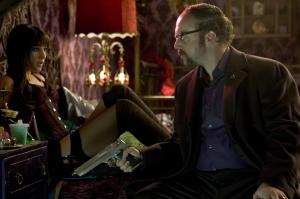 The plot opens simply, the best way for a film that is going to reject logic at any moment. Clive Owen plays a drifter, wandering around the rough parts of town. He happens upon, a pregnant woman, moments from giving birth, being pursued by some hit-men. Some primal urge to help or perhaps nothing more than boredom inspires Owen’s nameless character to join the fight. There we find ourselves confronted with the kind of sequence that best characterises this movie. Clive Owen, with the accuracy of a computer targeting system, takes on endless thugs, while delivering this poor woman’s baby. It is a slap in the face that promises that the rest of this movie will be high on thrills, low on sense. Michael Davis commits to each energetic set-piece so that the descent into chaos is natural. The world around Clive Owen is so bonkers, it feels right that there is this unkillable hero in the centre of it, who delves out brutal justice for the people that deserve it. The movie only gets dafter and dafter, taking us from wacky fight scene to wacky car chase. Clive Owen uses wires to puppeteer a whole building full of shotguns. He snatches guns from the floor, while driving cars at high speeds. The scene that will have everyone talking in excited whispers is the moment where he takes out a room of assassins, mid-intercourse with Monica Bellucci. Its cheeky exaggerating of the male fantasy is the clear attraction point here, likely losing female viewers, but gaining a rallying flag for the single male, vying for the next hot action movie. Occasionally, the film pushes the boat out too far. Clive Owen falls out of a plane and has a shoot-out with a henchman while falling through the sky. The technology of 2007 cannot do the sequence properly and it becomes a moment that takes you out of the immersion of the film and reminds you that this is a story from a director, trying far too hard to please. It also struggles to find anything lasting, due to the fact that the hero is clearly established as frustratingly invincible early on. You never fear for Clive Owen and it means that only a few scenes (I applaud the early scene where he needs to reassemble his soaking wet gun, before the killer finds him), actually find anything close to tension. In the late act, Shoot Em Up gives itself nowhere to go. The dashes of light at the end of the tunnel are strong supporting turns from Monica Bellucci’s fiesty femme fatale (Bellucci proving she became a Bond girl a decade too late), and Paul Giamatti, always brilliant, and giving this film the kind of meaty villain that raises this story from a senseless thriller to a decent one.

Final Verdict: Daft as a box of spiders, but, when it isn’t pushing its USP that one step too far, Shoot Em Up hits home.