The Undiscovered Country had no choice. It had to be good. With the cast hitting a very old age (DeKelley looks due to keel over at any given moment), The Undiscovered Country was due to be the last Star Trek movie featuring these actors and characters. However, being all too aware that Star Trek movies were famously inconsistent, the producers had to work hard to make sure that their send-off was a decent one. Some changes were easy (get Shatner as far away from the director’s chair as humanely possible), while others required thought. The end result is a remarkably satisfying one, if not as ground-breaking as Meyer’s other entry, the Wrath of Khan.

The Undiscovered Country’s main weapon is its cleverly crafted story. Since The Journey Home, an overlapping story arc had been abandoned which gave Star Trek the freedom to do what it wanted, but now we are at the final chapter, there is no traction to help tell a story. Simply put, haven’t all the stories been told? The loss of a true friend, the death of a son, the adversary of old age… The Undiscovered Country’s main challenge was, simply put, boldly going where no one had gone before. Therefore, the movie opens with the Klingon’s moon and main energy depot exploding, sending the Empire into ruins. With only fifty years worth of supplies left at their current consumption rate, their only choice is to minimise their military force, which brings them to the uncomfortable reality of finally accepting the truce with Starfleet. Spock volunteers the Enterprise for the job of meeting with a Klingon ambassador, which turns out to be a remarkably bad idea. And this is the heart of The Undiscovered Country. After years of treating the Klingons as enemies, both the audience and Kirk have no idea how to treat them as allies. An early scene sees Kirk savagely declare, not just his mistrust, but his hatred of the Klingons. They killed his son, a story beat sadly forgotten due to the fact the third Star Trek movie simply wasn’t memorable enough, but more than that, his disdain has run through his blood longer than he can remember. The Undiscovered Country has a lot of good scenes, but one of the most important ones in terms of the story is the dinner conversation between the crew of the Enterprise and the Klingon ambassador’s party. These two races are impossibly different, the Klingons barbaric and uncivilised. The humans are arguably just as bad, Kirk unable to get over his prejudice and hitting one Klingon with the best insult from all six films combined. The Undiscovered Country’s main message is about racism, when boiled down to its bones and the very real fact that one needs to look past the battles of old and genuinely try to connect with their enemies. Spock’s look of disappointment with his friends is heart-breaking, perhaps the look meant for us as well. Again, humanity would be a whole lot better if the world was a little more like Spock. 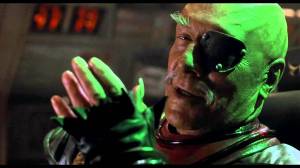 However, this movie is more than just moral messages and debates on racism. As the peace talks are starting to go well, a traitor in the ranks (Klingon or human? That is the mystery at the heart of the story), sabotages the peace talks, threatening to throw the two races back into war again. It splits the movie into two halves, always best with an ensemble cast this large. William Shatner and DeForest Kelley handle the action side of things, away from their crew. I won’t spoil the specific situation, but it involves a beautiful shape-shifter and Kirk kicking a giant alien in the ‘kneecaps’. Back on the Enterprise, Spock, who proudly proclaims that Sherlock Holmes actually existed and was an ancestor of his, uses the remaining crew to try and solve who the traitor is. There is a cracking little riddle on how the bad guys are doing what they are doing, which sees Nimoy proudly use his logic to its natural extent. There aren’t really enough red herrings to make the mystery as thrilling as you want it to be, but it does give The Undiscovered Country a pleasant pace, more suited to the ageing cast than yet another dogfight in space would be. It ends with emotions running high, especially from Leonard Nimoy whose ability to convey anger, without ever being consumed by it, never ceases to amaze. Throw in some solid acting from the guest stars (Kim Cattrall plays the new Vulcan helmsman, Christopher Plummer plays a Shakespeare quoting Klingon), and you definitely have one of the better Star Trek movies on offer. Bonus points: look out for a cameo from Michael Dorn, who goes on to play Worf in the Next Generation.

And this brings us to the end of William Shatner’s reign on Star Trek. It is definitely an inconsistent period in Star Trek history, going from unstoppable strength to painful weaknesses. However, for all of the budget problems with the series or poor decisions in the movies, this era in Star Trek had the power of originality. For many, these faces are the true essence of Star Trek, the bravado nature of Kirk, the sarcastic cynicism of Bones, the dedication of Scotty, the logic and self-sacrificing power of Spock. I am genuinely sad that there are no more movies or episodes to watch with these faces greeting me each time. Captain Kirk, it has been a sincere pleasure.

Final Verdict: The Undiscovered Country is a worthy send-off for the team, poking some hard truths about morality at the audience while delivering an entertaining Sci-Fi thriller.

One thought on “Star Trek VI – The Undis-Covered Country: The Review”