Director: Brad Bird
Cast: Patton Oswalt, Lou Romano, Ian Holm, Janeane Garofalo, Peter O’Toole, Will Arnett
Plot: A rat (Oswalt) is separated from his colony and, out on his own, is given the oppurtunity to follow his dreams: cook in a gourmet restaurant.

By this point in Pixar’s filmography, we have figured out their game plan. They will take something we take for granted (insects, toys, futuristic recycling robots), and give it a new leash of life, giving it humanity, opinions and, probably most importantly, a culture. Ratatouille might be a more confined approach to their style of story-telling (a colony of rats with only one truly focused character feels less extensive than the revelation that toys are alive), but the points still remain. 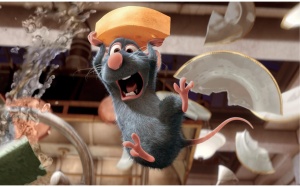 The action is switched to the glamorous streets of Paris for two beneficial reasons. For one, it gives Ratatouille a sense of identity that breaks it away from the sub-urban backdrop of Toy Story and the Incredibles. Paris gives Ratatouille so much flavour that for large portions of the film, it doesn’t really need the rat angle to come alive. From the aggressive work environment of top French restaurants to smaller things like having the villain use a miniature moped to chase Remy around a cobbled road, France just pops out at you from the screen. Pixar’s animation comes alive here, so the atmosphere of Paris feels like a living, breathing thing. It harkens to a more Disney approach to Pixar’s later stories. The likes of Ratatouille might be Pixar at half-speed, but the unique setting definitely puts it in a more favourable stead that the churning out of sequels of past successes. The other reason that Paris makes for a strong change of pace is the fact that the defining of rats as vermin takes a more brutal tone in the clean, high class society of Paris. The whole point of Ratatouille is a rat with dreams of cooking, but because of his station, he can never achieve this dream. Whenever anyone so much as glimpses Remy in a restaurant, a witch hunt is started to capture and kill him. It is hard to dislike the human characters who hunt down Remy with such passion, because the movie makes clear that their jobs are on the line if a ‘dirty rodent’ is found in their establishment. Society is the problem, not any specific person. Ratatouille asks is this is fair or correct. The narrative goes from Remy’s failings at breaking into his culinary profession to him adopting a mismatched friendship with a fledging intern at a restaurant. He finds a way to cheat his way at being a chef, by cooking through this intern. The friendship between man and rat is a poignant beat in Pixar’s story, unable to communicate due to their differing species, but their mute ways of conversing add a touching note that obstacles can be overcome if you are willing to work at discovering ways around them. Pixar also add a trademark sobering message to their picture that makes their story style so unique too. It does suggest that one rat cannot change the high class nature of society, hinting that chasing your improbable dreams isn’t always an advisable lifestyle choice. The truer conclusion for the story, and perhaps the lives of the young viewers watching the film, is that you can take your passion and find a sensible outlet for it. The ending of Ratatouille can either be seen as a misleading nose-dive into realism or an optimistic twist conclusion.

Ratatouille’s problem is that it does occasionally feel more Disney than Pixar. List all of the Pixar movies and Ratatouille will likely be the one you forget about. The background universe of the rats is nowhere near achieving the creativity of the living conditions of emotions or the culture of out-of-work superheroes. It feels more like a Disney film where an unorthodox hero chases a dream and the viewer learns a bit about a new culture (Paris), and some life skills. It is a very solid effort of an animated feature, but there is never any part of it that feels genre-breaking, something most of Pixar’s original works were proud of doing. Perhaps the problem does come down to the fact that Ratatouille’s human characters become too central. The mid act section of the film almost pushes Remy out of the picture with his human companion getting a love interest and inheriting the restaurant. The villains, Ian Holm’s neurotic owner and Peter O’Toole’s cruel food critic, are wonderful creations, but in being a world away from the rats steal from the unique selling point of the film. Ratatouille is a film about two world colliding, rather than a new world being explored extensively. Yes, it does feel a little cruel to judge Ratatouille for simply not being on the same level as Pixar’s other projects, but with an animation company that puts itself on a pedestal every time, it is the sad downside to their works.