Ever since Saving Private Ryan, war film have followed a seemingly inescapable trend. The only true war to depict the brutality of war is to make it as bloody as possible. Saving Private Ryan’s stand-out scene is one of the most iconic in cinematic history, especially when it comes to the World War II genre. Guts are strewn across the battlefield, heads are splattered across walls… ever since that amazing piece of cinema, most gritty war movies have followed by example. As a result, those who do not have a strong stomach, rarely find any joy in war movies, directors hammering home just how graphically violent it is. While there is nothing wrong with these pictures, it is refreshing to see Christopher Nolan try a new tack with making us feel the terror of WWII. It is difficult to recall one moment in Dunkirk that features so much as a drop of blood. Yes, people die, and no, this is not a PG glossy affair where war is glamorised for Hollywood potential. The total opposite, in fact. Only Nolan works very hard to move away from the showmanship of making a gory war movie and instead focuses on conveying the horror of war through psychological means. 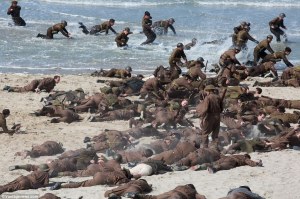 This is where Christopher Nolan, the artistic visionary shines through. His Dark Knight trilogy were lessons in poignant cinematography and Interstellar proved his prowess at blockbuster spectacles. Dunkirk is a wonderful display of raw cinematic power. While there are no such Saving Private Ryan tricks like bloody head-shots or stomach-turning deaths, Nolan’s take on the brutality of war is less physical and more internal. He perfectly replicates the sensation of dread crawling under your skin. He crams extra after extra into claustrophobic settings to convey this nauseating sense of the British soldiers being trapped like rats in a cage. The soldiers might have the numbers, but they are also horrifically helpless. Certain shots like a terrified Fionn Whitehead trembling in the sand as a German plane fires a carpet of bombs heading his way, don’t let anything but the visuals do the speaking. The audio is just as powerful as the sight. The audience will be reduced to cowered in their seats when the surround sound of a German plane roars to life, filling the atmosphere with horror. As the sound drowns out everything else to dizzying effect, you cannot help but think that Nolan has perfectly recreated that sense of fear that British soldier on that beach would have felt. You are in the beating heart of the movie, the war, rather than a horrified spectator, the feeling that comes with the gory tricks of Saving Private Ryan. Hans Zimmer deserves maximum applause (as well as hopefully another OSCAR), for a score that does most of the speaking for Nolan. This is a largely wordless movie, but with Zimmer’s panic-inducing soundtrack, words don’t really feel essential anyway. Yet, Nolan somehow makes his movie not just about panning the pointlessness of war, but somehow creating a feel-good picture about the British values. This is not a film where the British fight the war with a stiff upper lip, or anything glorifying WWII to that effect, but a film where the British can suffer the nightmarish situation of Dunkirk and pull through. Somehow amidst the horror of the scenes, Nolan finds time to restore our faith in Britishness. Tom Hardy’s pilot isn’t so much a character, as a microcosm for the British attitude when it comes to looking after its own. It will be a long time before we get a film like Dunkirk. It is well known that Christopher Nolan prefers filming live action sequences, rather than trying to recreate this imagery with special effects or green screen. Therefore, Dunkirk also carries this additional weight due to the fact that you know that these sequences actually happened on a film set somewhere. The plane fight scenes are astonishingly good, mainly because Nolan straps cameras to a plane and simply has a dogfight with them. The realism beats any of the CGI madness a superhero movie would have to offer (including Nolan’s own superhero dogfight in Dark Knight Rises). Sweeping shots were rows of terrified, crouching soldiers are made all the more poignant, because we know that we are seeing is real, not computer generated. This is a movie made to ground Nolan’s argument that real is better than animation. You will leave Dunkirk strongly in his favour. 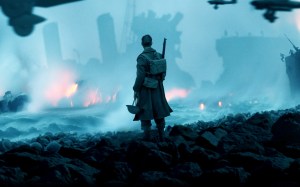 Then why does Dunkirk leave you lacking the usual thrills that comes with a usual cinema outing? It is a film with ups and downs, for sure, large moments of the movie leaving you reeling with amazement at Nolan’s brilliance and others having you frustrated at the lack of narrative. Dunkirk is mainly without a story. The argument is that Dunkirk is the story, in itself. Strapping on the usual stereotypical trash about a young boy with a girl back home would arguably dilute the originality of Nolan’s work. Nolan casts young lads with stock looks that are largely silent, their purpose to be anyone, your son, your brother, you, trapped in the horrors of war. But if the character had some form of back story, we might end up having something in terms of emotion to latch onto. As it stands, Dunkirk is little more than the British soldiers, cowering on a beach, while a pilot, with little dialogue, shoots some planes in the sky. For the first half hour, it works, creating a ‘less is more’ feel to the picture, as characters travel across the war-torn beaches, experiencing every angle of the fight. But with the performances reduced to only Mark Rylance and Cillian Murphy getting chances to act, the silent cinematography fails to hold your attention. Dunkirk isn’t an enjoyable film. But not in the same way that Schindler’s List isn’t an enjoyable film, because war films aren’t really meant to be, but: well, in all honesty, it’s just a little bit dull. For those struggling to understand how a film can pick up the Best Director OSCAR and not a Best Film OSCAR, Dunkirk is a prime example of how. I have nothing but praise for Christopher Nolan, and this film, if nothing else, is another brick in the wall that proves how talented the man really is. But we could also argue that, as he wrote and devised Dunkirk himself, did he hand himself these great scenes? With little in the way in terms of narrative to tie together the amazing cinematography, Dunkirk could be argued to be little more than a show-reel, or advertisement for how wonderful Nolan is. Is this any different than a famous actor producing his own movie where he gives himself the title role and all the best lines? The end result of Dunkirk is an emotionally confusing one. You feel that you should like what you have just seen. Its heart is in the right place, an accurate and thoughtful depiction of one of the nastier moments in WWII and Nolan’s power to intelligently stimulate the sensation of war without the use of graphic visuals is commendable, but truthfully, Dunkirk is pretty to look at, but hollow underneath.

Final Verdict: A confusing mix of cinematic genius and plodding narrative. Great to look at and powerfully filmed, but lacking a sure footing.

2 thoughts on “Dunkirk: The Review”