By now the Carry On series is a pretty solid formula. With an improving quality in each film, the Carry On knew where their strong points were. There are moments in the fourth movie, where the team use trademark expectations to hammer home a joke. For example, the plot of this one is arguably fairly similar to the first Carry On film, Carry On Sergeant, where a military sergeant needs to whip some foolish newbies into shape in a short space of time. Here, the military sergeant is now a police sergeant and his team of morons, constables (including Connor’s brilliantly named Constable Constable). In the first film, we had to slowly introduce the various recruits and what made them so silly. Here, the movie just cuts to series regulars, Phillips, Williams and Connor walking down the road to earn instant laughter. We already know the kind of idiots these established comedians can do, so what is the point in wasting vital narrative time in setting them up? 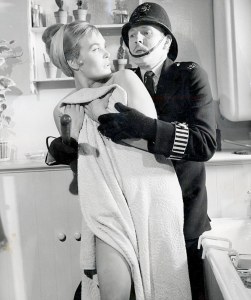 There are downsides to the formula. As we hit the fourth movie, routine is settling in. Carry On Teacher was a great piece of Carry On comedy, but it has sadly left this instalment few places to go. Yes, it does make good use of routine, lining up the kind of sketches we have come to this film to watch. There is always a pleasant feeling of knowing the kind of bawdy antics that these actors will get up to. In certain occasions, the rudeness of the jokes find new levels to reach, including a scene where the male actors are caught in the shower, a rather racy show of nudity for this era. Modern viewers will find this pushing of boundaries welcome, as Carry On do like to reference taboo, but its dated setting means that what we feel is taboo isn’t quite what they considered taboo. The climax also tackles some sort of grand finale with a punch-up between coppers and robbers, although it definitely lacks the emotional connection of the stronger Carry On Teacher. However, now the actors have found their comfort zones, Carry On Constable sees them clinging to what they are good at like a lifeline. As soon as each character gets their first gag, we are painfully aware that little new will be covered. Kenneth Williams will play the pompous man with a high opinion of himself. Kenneth Connor will be the paranoid one with a nervous disposition. Leslie Phillips is the ladies man. Hattie Jacques will be strict with a hidden, softer centre. We have ticked all these boxes before. It makes you wish that for once the actors we have a shake around and see if Charles Hawtrey is any good at playing the stricter figure. The only actress who seems to be able to shake it up a bit is Joan Sims, who has played very different characters in each film, although her acting talents are also undermined by the fact she is always reduced to being a love interest. However, while we criticise the familiarity of these roles, perhaps they are also what makes these characters so great. Would we want Kenneth Williams to be anything other than his usual, hilarious self? Perhaps it is only the sheer number of Carry On Films that make calling the actors out on routine feel necessary, yet it is because of that sheer number that these lessons in British comedy should be celebrated. 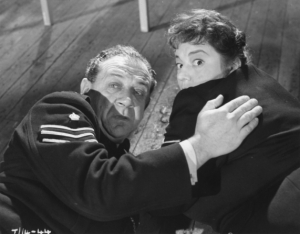 For the historians in the audience, Carry On Constable also marks a vital point in the history of the series. We lose a few of the earlier faces here, namely Lesley Philllps and Shirley Eaton. Eaton isn’t missed too much, seeing as her beautiful features made her too easy to lump into the girlfriend figure. She barely registers in Constable, a cameo appearance and little more. She either doesn’t have the comedic talents of Joan Sims, who has a much longer stay in the Carry On franchise, or she wasn’t given decent material. Eaton would find much more recognition in a few years’ time as one of the cult Bond girls in Goldfinger. Leslie Phillips will be more missed, a severe travesty he wasn’t in any more movies. His casual humour and cheeky glint in the eyes really brought an energy to the movies. This is the finest appearance yet, given a much more central role and able to steer the movie from sketch to sketch. While we lose two figures, we gain one of the better actors to the series. Sid James stars here as the straight-faced Sergeant. From the previous three instalments, it is probably easy to assume he was meant to be another one-shot, but he found a welcome permanent place on the team. His easy charisma brings charm to proceedings and he fits the gang like a glove. As Carry On Constable comes to a close, you know the future holds bright things.

Final Verdict: An average entry into the canon, but culturally important changes are made to the team.

One thought on “Carry On Constable: The Review”