Director: Simon Lex
Cast: Ben Gilbert, Emerson Pike, Victoria Lucie
Plot: A teenage girl goes missing, which is the perfect time for Ian (Gilbert) to get his Instagram views up.

I was originally going to start this review by stating how relevant this short film is with the Manchester bombings, but then I realised that that was the sort of cynical comment that IT Girl is calling people out on. 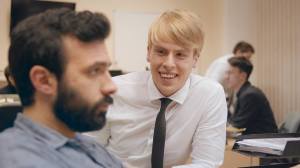 Simon Lex’s highly intelligent short film revolves around a horrible piece of news and how the social media age reacts to these tragedies. In light of a girl who goes missing, presumed dead, a busy bar is hustling with young people talking about which one of them sent the most heartfelt tweet out. There is no caring in their voice, only pettiness when they are made out not to sound caring. In trying to be the first and most vocal person to show support for this tragic news event (here it is a missing girl, but we can apply the discussion to terrorist attacks, celebrity deaths, a UKIP government…), they have become devoid of the very emotion they are so desperate to convey. What follows is a six minute piece that perfectly highlights this darkly comic material. And Simon Lex does get dark with his comedy. It is a credit to the director that the short is as powerful as it is, without becoming too indulgent with its black humour. A comedian thesis writer once claimed that there is no subject too dark to make jokes about, but the darker the material requires the cleverer comedian to tell. That is the true art of comedy, making people laugh out of things that never thought they could laugh about. This is exactly what Simon Lex does here with his grim subject of missing teenage girls. Ben Gilbert is essential to this, delivering a performance that literally takes Lex’s idea and goes full throttle with it, committing to the role with a passion that really sets fire to IT Girl. It is his willingness to put Ian into the situations he puts himself into with a goofy smile and a puppy dog exuberance that gives each gag, especially the ‘is-this-too-much?’ punchline, that layer of brilliance. While Lex and Gilbert are obviously playing the extreme end of the spectrum (I hope that no one genuinely considers one day embodying the crucial scene in IT Girl), there are aspects that we can perhaps take from IT Girl and look at ourselves. When a celebrity died, we were screaming too much about who was the biggest fan, rather than taking a moment to stop and grieve internally? Have we argued after a terrorist incident what is the proper way to show support? Why is the pinnacle of our show of charity changing our profile picture on Facebook? Lex takes these attitudes and portrays them back to us in his short film.

Final Verdict: In the space of five minutes, I was amazed, crying with laughter and having a minor identity crisis. If that isn’t great film-making, I don’t know what is.