Right from the no-expenses-spared opening number of Damien Chazelle’s La La Land, the audience knows it is onto something special. A camera hovers in the sky above a grid-locked free-way and hundreds of extras wait in the stifling heat of Hollywood. Then one of them, dressed in a bright yellow dress, breaks into song. It isn’t long before the whole road is teeming with smiling, dancing performers hitting us with a feel-good music number. In a heartbeat, the tone is set for La La Land: you are going to have a ball watching this movie. But fun aside, it shines from a film-maker’s perspective too. The camera never cuts, tracking the action as it unfolds, roving from one singer to the next, whenever it is their turn to take the reins of the song. It is a directorial masterpiece and if Chazelle’s last movie, Whiplash, proved he could do a quietly burning character piece, La La Land proves that he is just as strong at the technical side of the job too. It’s not just that first musical number too. Each and every song is just as impressive, wherever it is Emma Stone getting ready for a Hollywood party, her house-mates running across the flat, bursting into song and never missing a beat. There is also the first duet between the lead actors, Stone and Gosling, which is bound to be one of the highlights of the film for you, as the pair of them break into a snazzy dance routine, the camera never once cutting (this is even more impressive when you consider Emma Stone is often replaced by a body double when it came to the trickier dance pieces). Chazelle wears romance on his sleeve here, often stripping away a sense of grounded realism to simply help the audience buy into the emotions each character is feeling. When Emma Stone’s character runs away from her stable boyfriend to spend a night under the stars with Gosling’s charming but struggling musician, we get a surreal explosion of visuals, as the two actors float among the clouds, dancing the night away (very likely an allegory for sex). 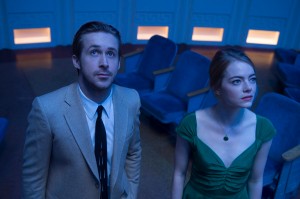 Then why doesn’t La La Land embrace this more? While the first half of the film is a dizzying musical extravaganza, by the second half, Chazelle strips back the music and instead directs a more conventional love story. Gosling gets a spot in a band that he doesn’t really feel a connection with. Stone struggles to get her one woman play into the spotlight. The couple spend less time together as work pulls them apart. It is hardly a bad movie with Gosling and Stone providing strong performances, as you would expect from the seasoned professionals, both carrying enough charisma to fuel an entire movie franchise. And even when the movie is handling its softer moments, you can handle fault the passion burning in the project. Chazelle’s fascination of the culture of jazz is always prevalent, the music outside of the musical numbers just as catchy, especially with Gosling’s commentary on what makes jazz as good as it is. The colour scheme is also brilliant, Chazelle focused on primary colours in the happier moments of the film (the yellow, blue and red originally assault the senses), while the gloomier moments strip the colours right back to a duller tone. When we do get a musical number in the second act, it is a softer affair, mainly close-ups of the actor’s faces, more focused on the performances than the display. Again it is hardly a lacking experience, but Chazelle seems to leave his prized weapon at home once he has used it up on the first few songs. Then again, the finale, while divisive, it is a tragically beautiful moment. For those that buy the wistful closing notes, La La Land will be Film of 2017. Others might leave this film tearing their hair out over what could have been. Whatever the opinion, you cannot deny Chazelle tells his story with the flourish of a director who knows what he is doing and loves every second of doing it.

Final Verdict: An amazing musical experience, with two strong leads and a director that attacks the screen with passion and gusto.