As we get deeper and deeper into the Harry Potter novels, the movies find themselves walking an ever dangerous tightrope. For example, the earlier books lacked some of the wittier writing and more powerful moments, but at least they were realistically suitable for movie condensing. As we get to the scenes that the fans are close to, the writers, directors and editors have to actually do these moments justice. Prisoner of Azkaban is arguably the book where the job jumped from tricky to outright improbable. While the book isn’t as weighty as the one that immediately followed, its plot was jam-packed with minor yet vital details, narrative flourishes and crucial character beats. You can imagine the tense writer’s room as the crew decided whether to trim a dialogue scene between Lupin and Harry or keep the whole glorious thing at the expense of an equally important scene later down the line. 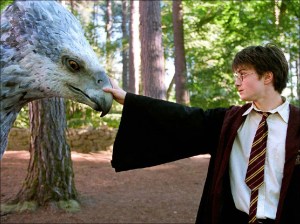 First thing’s first: Columbus bows out as director duties and the fresh face of Alfonso Cuaron steps in. The modern viewer will know Cuaron as the mastermind behind Gravity, a visually stunning OSCAR-winner, a decade after the release of Azkaban. Here, he has none of the experience, yet just as much talent. It is surprising just how many trademarks you recognise from the director, slipping into such a packed movie. Cuaron enjoys holding a shot for as long as possible, exposition scenes between two characters lasting a single shot. It makes for the accelerated story-telling style to feel less hectic. As Arthur Weasley tells us who Sirius Black is and why we should all be scared of the newest antagonist to the canon, we aren’t left spinning at the frantic cuts, but keeping up to speed at a leisurely pace. On the downside, one shot does limit a few of the finer actors who suffer from being on the peripheries of the story, to not much screen-time. It is always a shame when Alan Rickman is reduced to hovering behind Dumbledore for a whole dialogue scene. On the whole, Cuaron is a definite improvement to the franchise, his biggest success coming from the balancing of tones. The last two films were strongly situated in the fun zone, family adventures where a plucky wizard took on the dark forces and giant snakes. Columbus never skimped on the thrills, but he never saw the need to get too atmospheric. Cuaron changes that, forced into a corner as J. K Rowling’s third book ups the stakes. Azkaban definitely saw the novels get darker, with the leads hitting their teenage years and not just tackling amusing challenges, but coming to grips with their inner demons. Harry is faced with the man who sold his parents out to Voldemort, a charming beast is sentenced to execution thanks to a slimy Malfoy and a monster is introduced that literally sucks the soul from its victims. There are moments the writers cannot simply shrug off a set-piece with a whimsical attitude. Cuaron’s picture is a lot darker, the colour drained from the visuals and the lead actors asked to shoulder far more emotional weight. At the same time, the movie does demand fun, small scenes where Harry takes on a carnivorous book or turns his aunt into an expanding balloon. There are some fantastic gags in this film and Cuaron deserves a round of applause for not only making time for them in a jam-packed schedule, but making them fit in effortlessly with the serious nature of the rest of the story. In fact, the only time I can fault Prisoner of Azkaban is some of the inevitable trimming of scenes. You look at certain scenes and can tell that there is a better version on the editing room floor. When an extraordinary twist is dropped in the Shrieking Shack, it is a shame that the whole scene rushes through, simply out of time to tell the story it wants to tell. I can imagine the rushed middle act of Prisoner of Azkaban being quite tricky to follow for people that haven’t read the book. These are all understandable flaws and it feels really harsh for counting them against such a well-constructed movie, but when you stumble across them, it is a distracting slap to the face. 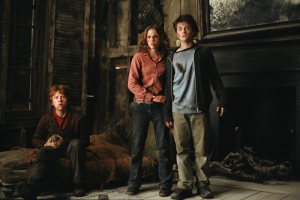 Let’s talk the cast, seeing as the producers worked so hard to get us the best cast possible. The three heroes of the story again impress, forced to take on a narrative far beyond their early years. It has always been easy to criticise Radcliffe, especially at this phase of the series, when he has grown up, but not evolved into quite the actor we all hoped he would do. There is one particularly flat moment when he is asked to sob emotionally, but his talents are just not there yet. However, he does work at keeping the story going at an easy pace. Spouting this much exposition has caused many an actor to fail, so looking back, we can muster up more respect that we originally did for the actor. It is especially harder for poor Radcliffe, seeing as Grint and Watson are out-acting him at every angle. Grint has always been a solid performer, relegated to the comic relief of the trio, but doing it with such gusto, he is usually the bright spark in any scene between the three of them. Emma Watson comes into her own here, a little flat in the first two, but as she matures, finishes her transformation into the perfect Hermione Granger. The script serves her character better than before as well, giving her brainy know-it-all character that little more bite. However, it is the newcomers that will have you hooked this time around. David Thewlis and Gary Oldman find themselves portraying some of the more beloved characters in the franchise, making their casting very important. Thewlis often steals the show without ever looking like he is trying to. His Defence Against the Dark Arts teacher is calm, wise and understanding, but of course, holding a secret which threatens Hogwarts. He benefits from doing very well out of the final edit, not as side-lined as everyone else. Gary Oldman, as the villain of the piece, suffers from the same problem which all Potter bad guys have: they are only ever around for the final scenes. Oldman is forced to condense what is clearly a very three-dimensional, thoughtful character study into a few broad strokes. Of course, further details on the direction he takes the character (as well as how intelligently precise Timothy Spall’s role is), would be divulging spoilers, but it gives the film the flourish it needs to see the show off. Then there is Michael Gambon, taking up from Richard Harris, who sadly passed away in between movies. His Dumbledore is much more active than Harris’, Gambon more physically able to get around than Harris was. He also plays the part more intense than Harris, who kept his wizard a passive Yoda figure. We haven’t hit the best of Gambon yet, but his Dumbledore is a worthy follow-up to Harris. Sadly, with a plot so crammed, it is the old faces that hardly get a look-in. Poor Maggie Smith hardly features. The Dursleys, as ever, are given about three minutes to do their best. Better are the Slytherin characters, Felton taking Malfoy to whole new levels of villainy and Alan Rickman, as ever, being the best thing about the whole franchise. While at times, he looks like he is going through the usual paces, the edit a little too fast to let his performance breathe, once you have finished the movies, or the books, return to his performance here. The smaller beats he does, once you understand his full character arc, are breathtakingly beautiful. The doubt, the jealously, the minor victories he takes… It is comforting to know that even after his death, these movies work as the perfect time capsule to demonstrate just how talented a man he was.

Final Verdict: Prisoner of Azkaban walks a tricky tightrope between more story than it can manage and a tone that jumps from funny to dark, but Cuaron’s fresh ideas keep the series moving along at a commendable pace.

5 thoughts on “Harry Potter and the Prisoner of Azkaban: The Review”