When you see about three hostage movies, you think you’ve seen it all. There are some good ones out there, Inside Man, Panic Room, Hostage, but there only appears to be a handful of tricks you can use. The siege mechanics keep the action stilted and the trapped room set-up means that there are only a number of smart twists you have access to. As a result, Green Room instantly finds itself in a decaying genre. And it is even more impressive that Saulnier manages to create a film that not only exceeds these expectations, but rewrites the rule book as we know it. 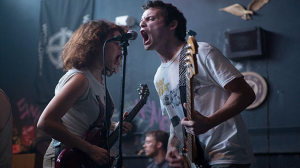 The back drop helps immensely, worlds away from the straight-laced universe we are used to. The punk rock scene is one that hasn’t had too much of a stint in cinema, so for people outside of that world, we are already out of our comfort zone. The band are fascinating, because the audience have to re-establish a connection with the heroes. It is amusingly alienating to watch this band open a gig with a song that directly insults their audience yet thrive off of the hate that their performance gathers. As bottles are thrown at them, they are bolstered as if they were receiving encouraging cheers. The audience too seem to enjoy being actively aggravated, their aggression turning into euphoria and perhaps respect. It also creates tension as well as originality. While the band are new enough, the Neo-Nazi club they are playing at means that the textbook is officially torn up and thrown out of the window. Anything goes, something both the audience and characters are painfully aware of. When a dead body crops up, it seems a case of ‘well, of course’, rather than ‘OMG’. The Nazis make for terrifying villains, the worst kind of gang culture. The villainous Mr. Darcy demands total respect from them, to the point where they are willing to stab themselves and serve jail time at the request of their idol. Again, anything goes and this is where the unsettling terror truly grows from. The strongest thing about Green Room is that, rather than stagnating due to siege movie’s usual cumbersome pace, Saultnier thrives because of it. He revels in the agonisingly slow build-up. There are no flashy shoot-outs here, but tense stand-offs, as both heroes and villains cower behind cover both too terrified to lean out and take the shot. Brutal kills can come out of nowhere, cause ten seconds of chaos and then we are back to the whimpering hiding as both sides lick their wounds and recuperate from their losses. But this is not a flaw in the slightest. When both kills and major injuries happen, they are done with some gruesome reality that we know that each pay-off will surprise and shock. There is no cutting away from bullets to the heads and the camera lingers over certain wounds that are likely to repulse. This is not a film for the weak-hearted.

The cast are superb. Patrick Stewart is the obvious show-stealer. While the marketing made it out to be a movie essentially written for him to get a juicy villain part, it’s actually more natural than that. In fact, he is relatively absent for a lot of the movie, watching patiently from the side-lines. But this doesn’t detract from the best Stewart has been in years. His villain is a quietly, formidable monster, talking barely over a whisper and his cold, calculating will is efficiently horrible. He emotes the minimal amount, acting with a poker face mask that makes every character decision a painfully surprising one. There is also the powerful suggestion that he is just a man: a demented, twisted man, but a man nonetheless, something Saultnier never forgets, a trait that gives Green Room a lot of its originality and power. But Stewart is just one side of Green Room; the draw if you will. When you are in the heat of the movie, almost everyone impresses. Joe Cole is great with a drawling American accent and the determination that makes him the most appropriate candidate for survival. Imogen Poots has never been this good. Alia Shawkat starts the movie as hard as a rock, but breaks into something softer. And there is the late Anton Yelchin. I hold back on reviewing films that include recently deceased actors (there hasn’t been any Alan Rickman reviews for quite some time, for example), as sometimes it is hard to detract from that context in your review. But Yelchin truly is remarkable here. He brings his usual softer charm to proceedings, borrowed from roles in Alpha Dog and Terminator: Salvation, throwing it into a world where softness doesn’t belong. His will to survive and relenting endurance is endearing, making him an easy character to root for. In a movie, where everything nice usually ends up with a machete to the back, you will be biting your nails, hoping Yelchin can make his way to the finish line.

Final Verdict: Saultnier creates the dark horse of the year, a brutal hostage movie that acts as a tense thrill ride. Gripping until the end.

2 thoughts on “Green Room: The Review”