Director: Stephen Campanelli
Cast: Olga Kurylenko, James Purefoy, Lee-Anne Summers, Colin Moss and Morgan Freeman
Plot: A bank robber (Kurylenko) has her identity revealed after a heist gone wrong and finds herself the target of a corrupt Senator (Freeman) she just stole from.

For just a moment, Momentum was looking quite good. We are thrown into the middle of a bank robbery with villains clad in exo-suits that makes them look like villainous gang of Power Rangers. The bandits squabble between them, resulting in the death of one and the unmasking of another, who to our surprise is the hero of the movie, Olga Kurylenko, an actress with a habit of playing bad-ass female characters (Centurion, Quantum of Solace). Sadly, things go rapidly downhill after the unmasking with the rest of the bandits much less interesting when unmasked and a writer who hasn’t got much clue where to go. 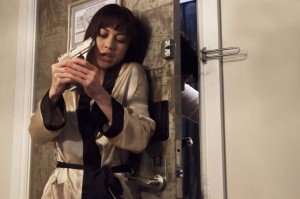 Script is everything it seems. A lot of the elements are here to make a passable action thriller. The movie is one, long excuse to have a bunch of punch-ups. Kurylenko, at the very least, is spared having to have too much of a romantic angle (merely suggestion), goes from bad guy to bad guy, getting involved in destructive car chases, skirmishes in family homes and gritty torture scenes. Most of the supporting cast are made up of the villains, so there is no shortage in bones to break and baddies to get rid of. You watch it, wondering why it isn’t making more of an impact. In essence, this should be a sub-par Bourne, but a watchable one nonetheless. And the truth is that there is such a shoddy script holding it together. The plot is a couple of movie terms thrown onto a table and picked at random. The (robbers) steal (diamonds) and a (drive containing sensitive information) on a (corrupt senator), who sends a (team of trained killers) after the heroes. Almost every other word is a pointless Macguffin, working as an excuse to get everyone moving. Without anything new or vaguely interesting grounding the story, there seems little excuse to take the time to watch this movie. The ending, for instance, tries to be smart, but the writers don’t have the intelligence to pull it off, so it just feels messy and anti-climatic. It also reflects badly on the cast. Kurylenko, Purefoy and Freeman are beyond this material for miles; it seems ludicrous they are even taking part in this indie South African thriller. Kurylenko has had a lot more meat to work with before and here she feels like she is going through the motions, trying to add depth where there is none. Her dialogue is delivered like an actress who has only just been told her character arc moments before by a director. Freeman is reduced to a cameo appearance, his iconic voice untarnished by the script (let’s be honest, he can make anything sound good), but he is such a minimal side to the movie that he doesn’t make an impression. Purefoy pretty much recycles his performance from The Following, which is a shame, because while Purefoy excels at the British baddie, cool and collected while dishing out bloody murders, it dilutes the times he has done it before. His script is predictable, like a first draft effort. There are quips about chess and making his victims choose between a quick death or a slow one. Bad guy 101. It is a shame, because if someone tried a little harder, there would be a tidy South African action on the director’s hands here. As a result, it feels like a relic from the 90s bargain bucket action days and cements why those kind of movies don’t really have a market anymore.

Final Verdict: Momentum just doesn’t try hard enough. It satisfies as a rote action thriller, but in a world moving away from that genre.