Suicide Squad sounds like a fun experiment rather than a solid concept of a movie. Throwing all of the more interesting baddies from various DC comics together, taking away the distractions of good guys and focusing on what makes them tick. On paper, it sounds appealing. We all love bad guys anyway, so why not hang out with them without the boring distraction of Green Lantern? However, you need a strong story to pull it off and this is where things fall apart.

In short, DC Comics make the same mistake as Batman Vs Superman, suggesting a internal problem with the writer’s room, rather than the films themselves. A relatively simple idea is bloated by far too many subplots, characters and distractions. Admittedly, Suicide Squad has more work cut out for it than the already established Superman and Batman. 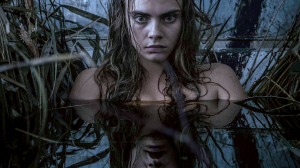 We need origin stories for all of the characters, from Will Smith’s family guy-hitman at night, Deadshot, to the cartel leader who controls fire and with a past that made him change his ways. There is a lot of story to get through and the opening half hour of this film is a mad rush of exposition, as Ayer literally bullet-points personality traits, with quick cutaways to origin flashbacks, far too manic to stick in the mind. There is also the fact that it turns out that there are far more bad guys needed here than originally thought. In many ways, the true bad guy here is Amanda Waller and the government, forcing these inmates into risking their lives for little reward. If we were worried it would be hard to sympathise for cold-blooded killers like Deadshot, Harley Quinn and Killer Croc, a few abusive torture techniques later show us the real dickheads are the ones in charge of the Asylum. It’s a strong message and one the movie is happy to run with the majority of the film. However, at the same time, there needs to be a more generic antagonist to get the movie’s main segment flowing. This proves to be the job that nearly brings down the whole film. The writers need a villain that is vile enough to cause all of these bad guys to turn on them and one that isn’t likely to just start signing up the Suicide Squad onto the team. For example, casting the Joker as the main threat here would beg the question why Harley is on the opposing team. The villain they go with is the weakest character on show, with the exception of a few red shirts, a CGI mess with a plot so generic, they are literally an excuse to get some bullets fired. It hurts the movie that it takes a long time to set up the bad guy too. All the while, we are trying to keep up with who’s who in the Suicide Squad, the bad guys are growing in the background, making the first half of this movie a weighty wade through plot points and story developments.

However, Suicide Squad does have one trump card that puts it far ahead of Batman Vs Superman: it is fun. And that counts for hell of a lot. When Batman Vs Superman got too confusing, it had nothing to hide behind. Suicide Squad injects humour (crucially missing from the Man of Steel movies), and as a result, while you are aware the story is hit and miss, it is hard to care too much when the cast are having a ball. At the end of the day, much like Marvel’s Guardians of the Galaxy, the thrill is in seeing the various characters interact and crack jokes. A few characters are painfully classified as ‘supporting cast’ in order to round up the numbers, something you rarely see the Avengers movies, but on the whole, everyone shines. It is great to see Will Smith back doing something this entertaining once again. Yes, it is generic Will Smith, an effortlessly cool wise-cracker that saves the day – but the actor is so good at it, that few will complain about his presence. Margot Robbie, on the other hand, steals the show. 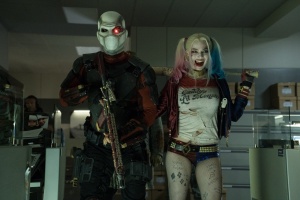 Harley Quinn is a tricky character to get right, but thanks to a pitch perfect performance from the actress, she is bound to be everyone’s favourite character. Seeing as the original comic book character started off as the dim-witted girlfriend to the Joker, the dumb female that got abused and bullied by her idol, it is great to see her so refreshingly reinvented over the course of her history. Here, she isn’t so much re-designed, as the themes are still present, but Harley now has added depth. Robbie plays the character with weight, so even when she is cracking jokes and being villainous, you pity her. Jared Leto is probably a close second when it comes to performances you have to go and see. The Joker struggles at playing the side plot; the character is much more comfortable, when he is the main event. That isn’t to say Leto is a poor Joker; on the contrary, he excels at the maniacal, bi-polar criminal clown. Hopefully, Affleck decides to make Joker and Harley his lead villains in his solo Batman film.

Final Verdict: Suicide Squad, in many respects, is just as flawed as the other DC movies, but humour and fun make it a much easier film to enjoy.