I remember reading Emma Donaughe’s novel, Room, and being utterly captivated. Never before had I read a book like it, heart-breaking, raw and horrific, in all the best ways. It charts the story of a five year old boy, Jack, who spends every day in a single room, with no knowledge of the outside world. His friends are the objects around him, the lamp, the plant, the wardrobe he sleeps at night. His only real human relationships are between his mother, also trapped in this room, and Old Nick, a stranger who brings them supplies every night. The story is told through the perspective of Jack, who remains joyfully ignorant throughout, but the audience, reading in between the lines, are able to pick up on the horrific story Jack is being sheltered from. His mother has been kidnapped from the age of 19, where she is raped by ‘Old Nick’ every night. The novel is about a mother and how she protects her child through one of the worst situations imaginable. It is a tough read, made all the more agonizing over Jack’s inability to comprehend his situation and the psychological struggle never truly brought up by the mother.

It seemed an impossible task to condense this book into a movie. However, with one of my favourite actresses, Brie Larson, at the helm, I was quietly confident. The main struggle Room has is keeping the ambiguity. Admittedly, there is a sense Abrahamson never tries to keep the main premise a secret for too long, the visuals of a movie making it too hard to keep the audience in the dark about the pair’s scenario. Instead, the fun comes in how Larson hides this nightmare from her child. In between chilling scenes where Jack sleeps in a wardrobe, the audience unable to escape the fact that his mother is letting her captor sleep with her inches away, there are surprisingly light-hearted scenes, where Brie Larson’s character leaves her anguish and misery to one side and makes sure Jack has as fulfilling a childhood as possible. It is fascinating watching the character, as well as Donaughe and Abrahamson, create a sense of fun with the limited resources given. It is an inventive piece, which sees the mother invent a game, where the two of them spend a half hour screaming through the vents. Jack sees it as a fun game; it is clearly the mother hoping a passer-by will hear them. The two performances are incredible. Larson has found herself a role any actress would bite their hand off for. The strength her character finds in the darkest of situations is truly empowering and while Room doesn’t really do happy moments, there is levity to be found in what the human spirit is capable of, especially encapsulated in this relationship between mother and son. However, it is the child actor who truly dazzles, Tremblay putting in a terrific display of emotion, energy and believability, as a young boy who is forced to mature far too quickly. The quality of this film could have been a very different story if a weak child actor was asked to lead it. Thankfully, Abrahamson finds himself a young star, capable of the work, and deserves ample credit himself, for directing a young boy so fluently. The first half of this movie is a blisteringly disturbing thriller, as the mother realises she needs to teach her boy a nail-biting escape plan, which captivates and pushes the boundaries of what we have seen before. It feels fresh, original and you will be hard-pressed to abandon a viewing mid-watch, despite the dark subject matter. 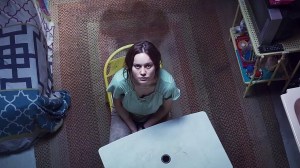 Then the second half kicks in. And don’t get me wrong, while tonally different, the second half is just as impressive as the first half. It is an important part of the story and with its absence, there would be a sense of lack of taste in the themes of Room. It plays around with the roles between mother and son, questioning who is protecting who. Some powerful scenes are brought to the table, where Brie Larson is forced to question her actions and early dialogue scenes are mirrored with sucker punch emotion. The second half of the film expertly handles the character arcs, helping them touch down and astound. Just when you thought the performances were pitch perfect, both Tremblay and Larson raise the bar to a whole other level and begin impressing all over again. There is also a sense Abrahamson is exploring the psychological layers of the story, essentially stretching an epilogue into a whole act. There is a constant narrative beat that debates whether Jack even wants to leave the Room. It becomes an interesting character piece that dissects the psychology of such victims, taking the story at the centre of the film and perhaps holding it up again real life case studies. However, while every section of this film is wonderful film-making, it suffers a severe tonal shift. Perhaps the easiest way to describe this problem is by comparing it to Castaway. While the second half of Castaway is integral to the story and fascinating in its own way, it doesn’t compare to what came before. And this is where Room loses touch with its audience. Yes, the psychological side of the second half is captivating, but how can it beat what came before? The dread, the mystery, the suspense of that miserable location defines the movie and when the film begins to move away from it, the audience may struggle with the change in scenery. However, perhaps that is the perfect metaphor for the film itself.

Final Verdict: A blisteringly raw movie that might prove too dark for some, but is surprisingly uplifting in its portrayal of a love between mother and son.

3 thoughts on “Room: The Review”