Director: Robert Eggers
Cast: Anya Taylor-Joy, Ralph Ineson, Kate Dickie, Harvey Scrimshaw
Plot: 17th Century, England. A religious extremist family are banished from their village, making their living on a farm in the middle of the woods. Then something in the woods targets their family.

I can see what the Witch tried to do. I really do. And just for the reason alone, that Robert Eggers took everything about the horror genre and turned it on its head, I want to applaud this movie. And there is a lot to like about it. But at the same time, too much is done wrong, resulting in a movie you find interesting, but not necessarily entertaining. 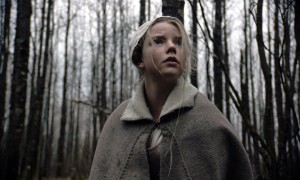 I love the idea of setting it in 17th century, England. Right from the off, we are watching a horror so separate from the usual teen horror or trapped in a haunted house with a poltergeist that The Witch demands attention through variety. I am even quite happy with the decision to use drawling Northerners speaking with a guttural growl and 17th century dialogue. Yes, at times, it can be difficult to understand what they are saying, especially in the early scenes before you are acclimatised to their way of speaking (amusingly, I had the same problem with Kidulthood), but it definitely adds to the tone, feel and novelty of the movie. The performances are also very good. Ralph Ineson and Kate Dickie stick to their strong points: Ineson a domineering religious zealot who loves his family, but goes about problem-solving all the wrong way, Dickie made suitably unlikeable and antagonistic through intense grief. The child stars attract more attention. Harvey Scrimshaw struggles with the dialogue, but his character arc is the boiling point of the film, his sexual awakening making him an easy target for a horror movie monster that uses arousal as a primary weapon. Taylor-Joy is the star of the show though, the one sensible person in the family, questioning enough about her religion to look past the close-mindedness of her parents and see the problem from another perspective. However, this way of thinking also makes her the perfect target for accusation, when they begin to think the Witch is one among them. Yes, the characters and tone are new and exciting, which sets The Witch on a strong start. However, a strong start does not guarantee a perfect finish and this is where the film caves under its own pressure. 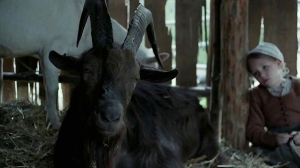 Honestly, it just can’t get the steam going. It hurts right from the off that the dialogue is tricky to crawl through and that the characters are fairly unlikeable. The kids are the only characters you want to make it out of the situation alive. As Kate Dickie’s grieving mother gets more and more uncontrollable, you want the witch to bump her up on the priority list. Ineson as well commands attention, as he comes to terms with his own flaws being a major player in the family’s downfall, but his redemption happens far too late in the day. There is a nice foot-note, using a metaphor with a wood-chopping visual, but otherwise Ineson is trapped with a character that also deserves a grizzly end. Also, the film’s strong start makes the cumbersome middle painful to trawl through. The opening conjures up a heart-stopping terrifying montage, where the Witch is introduced to the audience (again ingenious, these scares are usually saved for much later in the film), but not a lot happens until the final half hour after that. The movie focuses on an imploding family unit, which is hard to stomach when the character list is, again, fairly unlikeable. The Witch’s work is, pretty much, done with a few opening parlour tricks, only needing to crop up for the final act to finish off the remnants of the group. There’s a nice message there, but, again, it is not entertaining. With a dialogue and tone this out of the ordinary, it was just too big a risk to slow the movie right down and try to get by on something so divisive. The cinematography helps slightly, but the average movie-goer would rather have a few more scares thrown in there. Dotted around the film are some neat tricks (a tense meeting between Scrimshaw and a beautiful stranger in the woods, the shock ending), but as a whole, The Witch is a few magic tricks short of a matinee.

Final Verdict: Frustratingly, there is a lot to like about the Witch, intelligently made and boasting a few powerful scenes, but it’s too cumbersome to entertain.

One thought on “The Witch: The Review”