Black Mass is nothing you haven’t seen before, but in being a true story, it hits home harder than you would like to think. Jimmy Bulger was a Irish-American mobster who had a violent and ruthless crime spree in the 70s and 80s. He was only recently caught in 2011, after 12 years being on the run for the crimes he heinously commits in this movie. However, it isn’t necessarily the crimes that shock as much as the incompetence of the FBI chasing him. The story focuses on the unusual relationship between Bulger and a childhood friend, John Connolly, who worked for the FBI. Connolly grew up with Bulger and ever since Jimmy saved him from a school bully, Connolly has idolised the man. When his department begins tracking down suggestion that Bulger is one of many dangerous drug lords in Boston, Connolly decides to try and help Bulger rather than bring him down. Bulger and Connolly strike up a truce. Connolly keeps the Feds off of his back, if he becomes their hidden informant. Bulger uses this to his advantage and quickly uses the FBI to take down all of his competition, leaving him the untouchable, sole kingpin of crime in South Boston. And as you watch this movie, it becomes clear that Bulger isn’t a criminal mastermind, like we are used to from this sort of biopic. There is no clever worming his way out of investigations like we saw with the Krays in Legend. No, Connolly simple refuses to follow up any leads, serving up any witnesses to Bulger’s men and leading the FBI on a wild goose chase. As Bulger gets more violent and unpredictable, Connolly becomes the real villain of the piece, foolishly clinging to a childhood idol and refusing to be told any different by his colleagues. 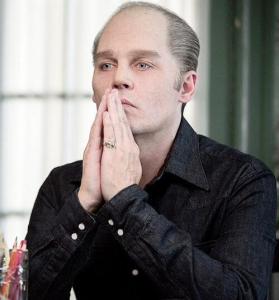 Black Mass is all about the performances. While the story is unsettlingly grim, you end up sticking with it to see Johnny Depp return to form in his finest role in quite some time. He hasn’t had a good role handed to him in quite some time, fumbling around with monstrosities like Mordecai and underachieving with Transcendence. Here, he is phenomenal. Right from the moment you see him in full make-up, you know you are in for a treat. The ghostly contact lens, the balding head, the rotting teeth… Bulger even looks like something that has been spat out from Hell. Add a Boston drawl to his acting and we have a very interesting persona to dissect. His temper is brutal, some scenes shocking and violent, due to Depp’s commitment to bringing this nasty piece of work to life. Even more hard-hitting are the quiet, more sinister threats. Watch out for the scenes where Bulger gets Connolly’s wife alone or the conversation he and his wife have about their hospitalised son. They are the highlights of the performance, confirming the return of Johnny Depp. However, for me, it was Joel Edgerton who came out on top. Again, it is probably to do with Edgerton having the more interesting character. Bulger, at times, feels like a pantomime baddie. While the things he does are evil, his actions never shock, because that is clearly his role in the film. Right from the start, he is confirmed to be a nasty piece of work and everything he does in the movie reaffirms that. In many ways, he doesn’t have a character arc, the audience seeing different sides of him as the movie progresses, but the character in himself never evolves. But Connolly’s villainy is more intriguing, because it seems so pointless. There is little for Connolly to gain from his actions, other than passing respect from Bulger. He never admits he is a bad guy, but blindly commits more treasonous acts. Halfway through the movie, he has become a gangster in his own right, without even realising. As he does more horrific and horrific things, dragging his partners at the bureau into this mess with him, he becomes the more surprising side of the story. Perhaps it also helps that while Depp dives into Bulger, tearing into the performance like an actor desperate to finally have a decent part (which, let’s be honest, Depp is), Edgerton’s acting is more natural. He never overdoes anything, earnestly delivering lines and slowly changing his mannerisms as the movie goes on. You come for Depp, but end up leaving the cinema praising Edgerton. 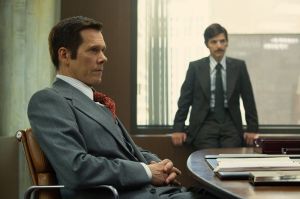 However, outside of the informant angle, Black Mass doesn’t break the mould in any way. There are too many scenes on repeat. There is the stock gangster footage of Bulger taking an unwitting gang member out for a stroll, only to shoot him in the back of the head somewhere quiet. Certain deaths seem like a waste of time, only featuring to add to Bulger’s list of evil acts. There is a great supporting cast here, but only a few of them do much. The acting is all superb, especially from Cumberbatch’s tired brother, who happens to be a Senator, and Dakota Johnson, the mother of Bulger’s child, struggling to raise her boy without him picking up Whitey’s bad attitude. But a lot of the characters feel wasted and side-lined. Jesse Plemons kicks the movie off, but is then relegated to broodily grimacing in the background. Kevin Bacon acts his socks off but is used sparingly. By the time Corey Stoll shows up, he only has a few scenes to work with. The focus is kept primarily on Depp, and while I have little bad to say about his performance, the character is nothing we haven’t seen before. Black Mass shocks and I feel it is important to understand the FBI’s (no, let be fair: Connolly’s), involvement in the horrors of what went on in Boston, during those years, but the movie doesn’t break away from an over-saturated genre.

Final Verdict: Depp enjoys an almighty comeback and Edgerton is wonderful, but the material feels too similar to biopics and crime movies that have come before.

2 thoughts on “Black Mass: The Review”