James Cotter is an impossibly busy man. If you have any connection with the independent film industry in Devon, then you would be aware of James. In 2015, he threw himself into several roles from an eccentric friend in feature film A Fool’$ Game to several theatre performances. On top of that, he enjoyed the release of a few short films in quick succession, The Runner and You Get What You Ask For Son. “Not bad for my quietest year since 2010,” Cotter reflects. However, we haven’t even touched upon the big milestone in Cotter’s 2015. James Cotter, who has been performing solidly throughout Devon’s major productions, has finally decided it was time to turn his attention to behind the camera, with his short film, Delays Imminent. 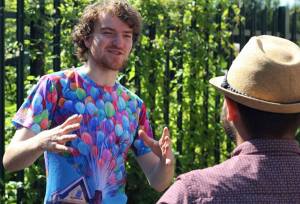 It isn’t as though Cotter has only just possessed the prowess to pull of his own short film. In fact, he has been hiding the skillset from the rest of the world for quite some time. “I studied TV Production at college and uni and after five years of it sort of fell out of love with it. Acting interested me more.” And it is easy to see why. James is described by many that know him as a born entertainer. Acting has always been in his blood and he is always surrounded with an addictive sense of fun. There was never any pressing need to make his own short film, when he was in as high a demand as he was. However, then the script to Delays Imminent crossed his desk. “The script was written about four years ago by a writer, Josh Merritt who I have collaborated with on various projects. Although we have never met in person, we regularly communicate online and share a very similar sense of humour. He sent it to me just for my opinion, but I instantly loved it and thought I want to direct this. The idea of a romantic film and being a very short length attracted me.” For those few that have seen Delays Imminent, it is a surprising choice of genre for James Cotter. With a natural comic style to most of his work, his fanbase expected something more upbeat and laugh-out loud. The South West Richard Curtis, if you will. However, Delays Imminent, while not totally devoid of laughs, rarely stops to have fun. “I’ve written and acted in a lot of comedy so thought if I was going to have a go at directing a film I would like it to be something people wouldn’t expect from me.” In many ways, perhaps this is one of the first times we, as an audience, have been allowed to peek behind the face of James Cotter and seen the creative mind that lurks beneath.

The film itself is about a lost soul, Alexander, who has recently suffered a loss in the family. He is socially adrift, his only relationship with his aggressive father, who seems more frustrated by his son’s reclusive lifestyle than concerned by it. “Alexander is someone who has undergone some big changes in his life – forcibly,” explains Ben Gilbert, the actor tasked with bringing James’ lead to life. “He ended up being quite closed off.” The difference between Alexander and other similar characters is that writer Josh Merritt, keeps the majority of the background details hidden from the audience. We are only allowed a glimpse of Alexander’s pain to help us understand the character’s thought process. Ben Gilbert pauses to consider if this helped or hindered the process of getting into character. “There are certain elements that I filled in myself, some agreed with James, and some that I talked through with Emily (Holyoake, Ben’s co-star in Delays Imminent), in regards to the relationship with Sarah. It helps to have an idea of the character’s thought processes, to make it not necessarily an easier job, but a more genuine one.” Sarah is an old friend from Alexander’s past, possibly an old flame or crush, played by Emily Holyoake. The short film pretty much revolves around Alexander’s broken character having a chance encounter with this girl from his past. “Sarah’s pretty confident and happy with who she is, but she’s not particularly tactful,” Emily says, describing her character. “I think she finds it frustrating that Alexander has become so closed off and whilst she wants to help him, she could be a lot more sensitive about how she does that!” Anything else? “Oh, and she’s definitely a bit of a hipster.” 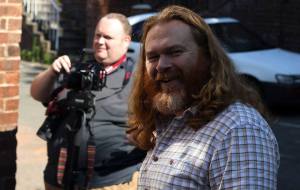 The interesting thing about the casting of Ben Gilbert and Emily Holyoake is that they are in fact a real life couple. It seemed too good a chemistry to pass up on, although James insists he cast the two of them based on their individual achievements. “I knew Ben was a very good actor and could carry off the lead role with ease,” James discusses on the matter. “We had worked together on a US TV programme called Kennedy’s Suicide Bomber and got along well. We also played brothers in a theatrical tour of The Tempest and the film The Runner.” And Emily? “We had very briefly met, so she was more an unknown to me. We had a lot of good actresses up for the role, but the fact she could play guitar, something her character needs to be able to do and the fact she had great enthusiasm for the part helped myself and Josh cast her.” And the stars themselves? What was it like acting alongside your real life partner? “Oh, Emily Holyoake was a massive diva,” reveals Ben with a cheeky wink. “Very demanding…” In a separate interview, Emily retorted with: “Ben’s totally rubbish. Ruined every take. It’s a good job he didn’t have many lines really.” However, after a moment of chuckling, Emily softens. “He’s my best mate and we had a good laugh,” before she quickly adds “although only between takes because we are seasoned professionals.” Ben also appreciated being able to act alongside Emily. “Shoots like this one are already enjoyable, but she made it that little bit better. And I love listening to her play guitar, so that’s a bonus!” Emily follows it up with an exasperated sigh and the roll of the eyes. “He’ll probably look quite good on camera…”

However, while it was very interesting watching one of Devon’s most talented couples share a screen together, all eyes were definitely on the man in the director’s chair, Cotter, himself. While I joined him on set, he was, as ever, the centre of attention. Spirits were never down, despite unwanted trains ruining shoots and the general public talking over the audio. There was never a moment when the cast and crew were flagging, Cotter putting his talent for inspiring and cheering people up to its maximum effect. Yet I noticed something different about him, all the same. A steeliness behind the eyes. This was no longer James the entertainer, but James, the director/producer, balancing details and schedules on the tightrope that was his first stint as director. This is a passion project and it was clear he was going to do everything in his power to make it work. Afterwards, I caught up with James about the shoot. “Hellish!” James describes the experience in a single word. “The producing side of it was incredibly tough: organising cast and crew, filming locations, re-drafts of the script and terrible weather conditions stressed me out a lot and in hindsight I would get a producer in next time to sort that out for me.” But there is a light at the end of the tunnel. “The directing side itself I really enjoyed. I had a clear idea of what I wanted and I knew having Jim (Elton, the cinematographer) and Dom (Lee, the editor) whom I’ve worked with before quite a few times, it would visually look great, so my job was more giving the actors their motivation and trying to get as much out of the script and performance.” And as someone that was there on the filming day, I can personally attest that you wouldn’t know James was trying directing for the first time. Emily Holyoake earnestly agreed. “James was a genuine pleasure to work with – incredibly organised, thorough, clear on what he wanted whilst leaving plenty of room to be creative. I’m very happy to be part of his return to directing – he should definitely do more of it!” As far as film productions go, it was a very smooth one. Well almost… “On my first take I did make the crew laugh as I forgot it was me who had to say “action” so everyone was stood around looking at me and I was thinking why aren’t they acting and then I realised I was in charge!” recalls James, a smile on his lips. 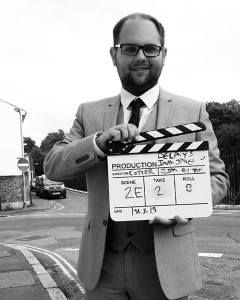 Now time has passed since Delays Imminent. As it is released, finally, to the wider public, it offers James a chance to ponder what his next move is. Is it time to go back to acting and take things easy for a while? Or has he caught the director’s bug? “Myself and the cinematographer Jim have discussed an idea for a film we both like,” admits James. “But at the moment my focus is to get this film to the right festivals and screenings to get an audience to appreciate all the hard work that’s gone into it. I would defiantly like to work with the writer Josh again too but at this stage nothing is 100%.” He follows it up, simply put with “I need a rest.” Therefore, we are left to sit back and let James’s work do the rest of the talking for him. As it impresses critics and audiences alike, it seems that James Cotter has truly taken the directing world by storm. Not bad for his quietest year since 2010.

Delays Imminent is out now and can be viewed for free right here. My review will be published on Friday 8th January.