Barely Lethal cleverly takes a forgotten background plot to James Bond and playfully tears into it like a surgeon that has been asked to do an alien autopsy. In 007, the title character had his parents killed when he was young and the government took him in. Seeing as he was trained from a very young age, by the time he was an adult, he was the perfect killing machine. Kyle Newman asks what that must be like for a child. Therefore, the set-up for Barely Lethal is a whole bunch of young girls training to be cold-hearted killers, bringing us loads of amusing scenes where Samuel L. Jackson (playing it straight as an arrow, because that’s half the fun), supervises six year olds blowing each other up with C4. One of the young girls, the protagonist, Hailee Steinfield’s chirpy Agent 83, feels cheated that her whole adolescence life has been taken away from her. While on stakeout, she treats herself to a 90s movie marathon (Clueless, 90210, Mean Girls), and decides she wants to experience that high school lifestyle. Opportunity strikes when a kidnapping mission goes wrong. In a punch-up with Jessica Alba’s super-villain (I would have loved to have seen Newman’s face when the casting director pitched it to him), Steinfield falls out of a helicopter and is believed dead. Rather than radioing in for back-up, she decides to stay ‘dead’ (another Bond trope with a teen twist), and enrol in a foreign exchange course. Before long, she is the Canadian Megan Walsh, staying with an American family and going through all the high school dramas she expected, even if her background reading is based on 90s chick flicks. However Homecoming, making friends and dating the cool kid is made even more difficult, when Jessica Alba decides to get revenge on the thought-dead 83. 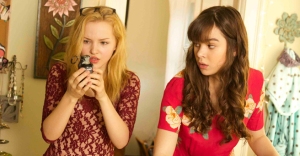 While this movie boasts some cool spy moves, including some fight scenes that are better than you would expect them to be, the main aim of this film is to be that classic high school film. It ticks off the trademarks to the genre, just like 83 does with her background reading. It is hard to call Barely Lethal a copycat movie, because sometimes that is precisely the point. It throws up classic movies nicely, borrowing Clueless’s kiss scene and including a funny gag where 83 passes up on the chance to be friends with some genuinely nice cheerleader girls, because Mean Girls taught her to avoid them at all costs. Maybe it is guilty of not having any original iconic moments, but it is entertaining enough that you don’t really register this. The jokes are good and the lead’s arc is polished enough to make you care. You feel for Hailee Steinfield’s character, as she craves for that normal life, but her spy world keeps catching up with her. It also amusing watching someone with an outside perspective of high school, jump right into the mix and try to stand on her feet. On Day One, she turns up wearing something straight out of Clueless. The running joke is, of course, that high school is arguably more dangerous than what secret agents get up to on a daily basis. The best gag of the movie is Hailee Steinfield confessing to her best friend that she is a killer – although she hasn’t actually killed someone. (“I just want my first time to be special.”) Sadly, it will probably be held back by critics because its spy genre tropes are a little held back. It feels very censored. None of the bad characters get killed off, often being knocked unconscious and the plot forgets about them (a cheap and child-friendly way of mimicking a movie kill). The fight scenes are clipped. Of course, everyone expects this, but when the high school movie feel breaks into Spy School movie, you might end up craving just that little bit more. Barely Lethal ends up becoming that movie you watch with your girlfriend, when she demands to watch a chick flick, but you need a small slice of action to keep you interested. It manages this much better than This Means War did. 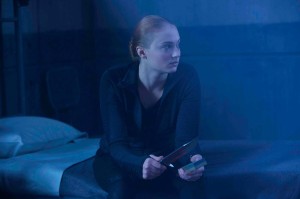 And then there are the cast, who are all on terrific form. I am sorry boys, but the girls are superior in this hands down. Hailee Stenfield has an easy-going chemistry that makes even her smaller gags amusing. Dove Cameron provides the unexpected source of entertainment. She is the typical sarcastic teenager routine, but Cameron’s natural ability as a comedian, as well as stealing the best lines, means that she could be the favourite character for a lot of people. Like a lot of the other cast members, it is just looks like she is having the time of her life. This goes double for Jessica Alba, who strolls onto the scene with a goofy smile and a laidback attitude. This is literally how her character is introduced. However, it is a nicely-tuned performance, working with the tone of the film. As she both tortures and chit-chats with her captured enemies, you cannot help but feel that Alba is relishing a role she will most likely never be asked to do again. The opposite could be said for Samuel L. Jackson. This is exactly the kind of comedy you will always see him in and the exact same character he often plays. This should be the point of the review where I demand he try to do something else. But god, he is so much fun. Every scene is improved when he utters dialogue, his voice so booming and captivating that he could probably monologue the plot at it would be just as gripping. He also acts as a label for the film: knowing that Samuel L. Jackson is in Barely Lethal kind of gives you an impression of the movie you are letting yourself in for. But my star of the show is definitely Sophie Turner. We have all seen her as Sansa Stark in Game of Thrones, one of the most divisive characters on the programme. She plays the damsel in distress, always weeping, always waiting for rescue and often having horrible things done to her. I think her character is important to the show, especially when you read how the books write her, but I do agree that Sophie Turner must be bored silly at the same routine episode in, episode out. Therefore here, she explodes. Sophie Turner plays Steinfield’s spy rival, that assassin that can do everything 83 can do, just slightly behind. She relishes the chance to play something akin to Rachel McAdams in Mean Girls and adding a mix of Bond villain 101 into the pot. It isn’t a performance that will set the world on fire, but it does show the world that Turner is capable of so much more than Sansa Stark. I am ready to see her in the next X-Men movie.

Final Verdict: Perhaps Barely Lethal is little more than innocent fun with a cast who don’t take themselves too seriously and a copycat storyline. But it is innocent fun, and that works wonders for me.

4 thoughts on “Barely Lethal: The Review”