Age of Kill can’t really decide if it wants to be a smart film or a silly one. The silly elements are the foundations of this movie. The plot is essentially a British Taken or another version of the ‘family taken hostage so the hero has to act out various murderous acts for the baddie’ sub-genre. And by silly, I don’t mean that as a criticism. There is nothing wrong with wanting to make a movie about an ageing action hero, shooting his way through a group of targets. Hell, the rest of cinema seems to be rolling with the idea to moderate financial success, so it is only fair that British film-makers try to get a cut of the action. Cue a relatively thread-bare story where an ex-spy is forced against his will to kill a bunch of strangers (the plot hole here is that whenever Sam Blake misses a deadline, the villain kills a bunch of civilians, questioning why he even needs to get the cunning hero involved in the first place – he seems perfectly happy killing people in public himself), and some slow-motion kills. Age of Kill’s problem is that it doesn’t commit to the silliness, dumping a load of smarter movie elements into the mix. And for a long while, this more intelligent story seems to be the factor that is making Age of Kill far better than it is meant to be. While Blake goes on his reluctant shooting spree, the political climate is shifting in the background. Nick Moran’s right-wing political party (read UKIP, without actually being UKIP), is rallying support and the bad guy is either trying to disrupt or enable their protests. Quite interestingly, director Neil Jones doesn’t overly judge the right wing party, making them victims to a certain extent, even if he could be argued to making a stand against their bigoted ways. I am not a UKIP supporter in the slightest, but it was nice to see a movie about them, where political satire wasn’t involved. More intelligent writing came from the detectives chasing Blake, a feisty female detective wading her way through red tape and sexist superiors in order to bring down, who she thinks is a crazed killer. 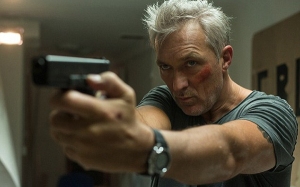 So for a good while, Age of Kill is doing a fairly good job. It will never be the movie to set the world on fire, but the acting was pretty good (Martin Kemp makes a very impressive and charismatic action hero, it turns out), and you want to see how it all turns out. However, as the movie hits its finishing stretch, everything ends up feeling slightly under-cooked. A lot of the side characters end up fizzling away into nothing. The cop character never really makes a strong impact on the conclusion and Blake’s daughter is horrifically under-developed. Even worse, Dexter Fletcher wanders into the movie, late in the day. He is introduced as another shabby ex-spy, but one that looks professionally in control. His appearance is so short-lived that it becomes a pretty disappointing side-plot. The background intelligence stuff is pretty much just window-dressing and when it all boils down to it, Jones really does just want to make a movie where Sam Blake shoots up some bad guys. And even that side of things is a little unsatisfying. The action isn’t particularly good – a few over-choreographed punch-ups – and an over-use of slow motion. There are good sides to Age of Kill, mainly the British cast that you have seen in all your favourite English TV shows (Skins, Whitechapel), who are given something interesting to do in this low-budget action. However, you cannot escape the feeling that this movie was almost a lot better than it turned out to be.

Final Verdict: Age of Kill grips good ideas, but never goes through with them. A shame, because the acting and themes were looking quite interesting.

7 thoughts on “Age of Kill: The Review”