Developers: Ubisoft Montreal
Publishers: Ubisoft
Plot: A Prince eager to please his father is duped into unleashing the Sands of Time, destroying his kingdom. Armed with a mythical dagger, the Prince is trapped in a nightmare.

The Prince of Persia: Sands of Time was one of the first games to truly blow me away. It was the very first PS2 game I played and for that, it shall always be the game that introduced me to graphics being one of the principal factors in the success of a game. Poor graphics was always something you put up with when you played older games, but here, while dated now of course, it was the first time, I was taken aback by how beautiful the world was. The background of Persia stretches for miles, water drips from your character as he gets out of it and the character models conveyed personality. This is extra important, because this is a game that relies a lot on its atmosphere and setting. The original Prince of Persia games were little more than side-scrollers, but with this reboot, we have something more akin to a survival horror. Trapped in a decaying castle with the side characters being whittled down with every passing moment… if the backdrop of Azad didn’t work, then we wouldn’t have a game as nearly as impressive as we do. Don’t let the comical and downright awful movie companion fool you. This is not a light-hearted game. The shadows inspire dread, the monsters are genuinely scary to come up against and certain quiet moments are made even more satisfying by the beauty waiting for you. It is a landmark gaming achievement in my eyes and always has an embedded sense of greatness in my gaming history. 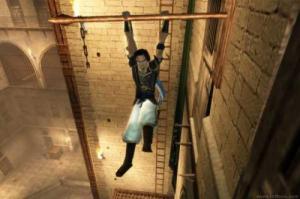 But what about the story? The Prince, whose name is only revealed in the closing credits, joins his father in assisting the Sultan of Azad in a siege on their enemies. The opening montage sees you storm an enemy palace and come away with all sorts of gifts and treasures to please your new ally, the Sultan. Chief among these are the daughter of the defeated lord, Princess Farah, and a mystical hourglass, that contain the Sands of Time. The Sultan’s enigmatic advisor, the Vizier, tells the Prince’s father that the Sands of Time can be unlocked using a dagger that your character took a shine to during the siege. The Prince, ever eager to please, obeys the Vizier, but it turns out to be a trap. The sands, once unleashed, turn everything they touch into horrific monsters, people made from Sand and fuelled by the simple desire to kill. Your father and the Sultan turn into carnivorous creatures in front of your very eyes. The only survivors are you, protected by the dagger, the Princess, whose people were hiding this dangerous weapon from the world, and the Vizier, who took measures to shield himself from the Sands. Fuelled by vengeance, the Prince tracks the treacherous Vizier through the remains of the castle, trying to catch up with the Princess, who might be able to stop the Sands from spreading to other kingdoms and merely trying to survive the nightmare that they are trapped in. I love the story here, because it is simple in itself (once the packed introduction dies down, the objectives and plot is relatively simple and accessible), and allows time for character and atmosphere to breathe. There isn’t a level system, where the game is divided up into areas, but one long battle for survival. The action never cuts away. Of course, this trick has been used several times now, in fact becoming a staple of many games, but at this point in time, it was the first I experience this style of story-telling and I loved the relentlessness of the action. It cuts away from the routine nature of a game and you just spend time with the character of the Prince, as well as get caught up in the romance blossoming between him and Farah. Their chemistry is good fun and you enjoy just spending a gaming session hanging out with the pair of them.

The gameplay is also very fun. Forget Assassin’s Creed – free-running in games started here. Running across as a wall for the first time in Prince of Persia was a mouth-dropping experience. The Prince opens the story as a fairly cardboard cut-out character, but when he gets to the action, he never ceases to impress. As well as getting through obstacles, the fighting is incredible. He dances around his zombie-like foes, his swordsmanship fun to adopt. The monsters are often stronger than you, but you learn to use speed to your advantage, making every battle a strategic duel, rather than a simple beat-em-up. Yes, your brain is engaged here. Prince of Persia often slow down the gameplay with a puzzle-solving mission and they are often quite tricky. Sure, some might call these segments tedious and if an answer is eluding you, it gets frustrating quickly, but it does shake up the gameplay nicely and keeps the player on their toes. The other key feature is your dagger. While the Sands of Time are savage in their destruction of the kingdom, the Prince learns to use them to his advantage. You are given the power to rewind time throughout the game, so if a booby trap or an enemy catches you out, you can go back five seconds to repeat that tricky manoeuvre you just mistimed. The power is finite though, so you have to collect pools of Sand to upgrade and collect vials of power. It almost feels like an alternate take on the lives system and offers a different dynamic of gaming to explore. Rewinding time seemed like a sceptical decision on Ubisoft’s part at first – surely the fights would now be too easy – but the feature has its own side effects, so it does actually catch you out at times. You aren’t given a carte blanche to make the fights so much easier with Prince of Persia – instead these fights have their own pitfalls that you need to learn and tailor your gaming style to.

Perhaps this game is just slightly too long for its own good. You will most likely get bored of it, before the end credits roll. The downside to there being no level system is that there are rarely any breathers and when the quieter moments come around the corner, sometimes they don’t register as well as you would like them to. Of course, this is early on in gaming’s days, so we can put down most of the problems to a lack of developing in the style’s life. Yet it still must be said that the fighting descends into repetitiveness before too long. Yes, the fights are well done and you feel like you are dancing rather than duking it out with these killers, but after a while, the same leaping and ‘finishing move’ graphic gets stale. It is a shame, because the combat is so glorious, you begin to feel guilty for finding it tedious in the closing stages. The problem with having monsters as your enemy is that the human element strips much variety out of the set-pieces.

Final Verdict: This was the first game that taught me that gaming was a thing of beauty, rather than a mere form of entertainment. Gripping, atmospheric, just general good fun…

One thought on “Prince Of Persia – The Sands Of Time: The Review”