The first ever episode of Spooks is surprisingly crap. We remember Spooks as the spy series that defied the spy genre with daring audacity. It was the show where the bad guys sometimes got away with it, the lead heroes were always steps away from being killed off or seduced by the dark side and the story was told in such a real and gritty manner that it was highly possible that this kind of secret agent antics could be happening in the real world, somewhere right now. However, as you tune into the very first episode of Spooks, there is none of this atmosphere. We could blame this on a TV budget, worlds away from the global success of Game of Thrones or the current Walking Dead episodes, but my dislike for the pilot was the fact that rather than doing anything with the spy genre, the pilot just embraces the clichés and trademarks. Smart, sophisticated Brits wear suits and give secretive glances over at each other from across the pavements. The pilot’s villain is a daft woman with the most excruciating American accent I have heard on television, who thinks the best way to go about banning abortion is to plant bombs and set them off. It did nothing for me and as my return to the Spooks series kicked off, I realised that the good bits probably don’t start until much later on in the show. 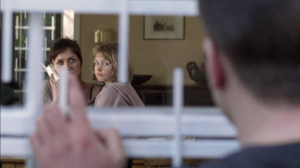 The biggest problem with the first season for Spooks is Matthew Macfadyen. He is endlessly bland as Tom Quinn, the handsome, leading answer to James Bond. I wasn’t sure if Macfadyen was playing the character as dull on purpose to get across that chameleon side to the spy character or whether the actor simply couldn’t act to save his life. Either the actor or the character is a wet sponge, that’s for sure. His subplot is his attempt to start an ordinary life with single mother, Ellie, but his attempt to summon up drama or interest in this banal staple of the spy genre doesn’t work. Esther Hall gives it her best, one of Britain’s more underrated actresses, but when Macfadyen fails to muster up a single iota of chemistry with his co-star, then the entire love story falls down on itself. At the very least, Hall survives becoming the irritating girlfriend figure of the hero, because Macfadyen makes Quinn so easy to dislike that we always end up siding with her on any of their arguments. Macfadyen isn’t much better at the action side of things too. He messes up the delivery of those James Bondian quips. I know I want Spooks to move away from the indulgent, obvious things to do, but if they are going to throw in a few clichés for old times’ sake, then at the very least do them right. Better are the supporting cast. I had no idea Keeley Hawes and David Oyelowo were in this, my Spooks experience starting in the final few seasons. Hawes is the talented spy who is put in an awkward position between employers, her back story much more interesting than Quinn’s, because her acting is miles more fun to spend time with. In fact, you kind of wish she would step up and take over lead actor responsibilities from Quinn’s awkward performance. Well, her or Oyelowo, who rarely breaks away from his cool spy setting, but he does it with so much more eloquence and fun than Macfadyen that we don’t see it as a black mark. Then there is, of course, Peter Firth’s Harry Pearce. The actor hasn’t quite been given the material the future seasons give him to make the character one of British TVs strongest heroes, but there are the rumblings of what could be, Firth handling the dull exposition with a certain flare.

This season consists of only six episodes, although few hit the mark. There is one major character death that shocks and surprises, the red shirt written a few episodes before and characterised enough that we don’t realise that she is only really in this show to set up this shocking death scene. Other moments of greatness come from guest stars popping up and adding a bit more charm to the whole thing. Kevin McNally marks the first of the good villains, oily, despicable and easy to hate, although the episode he is trapped in is just as full of undercover spy clichés at the pilot. Anthony Head flexes his charming and cool muscles in ways Buffy the Vampire Slayer’s early seasons didn’t let him do, in a much better episode, the first one that really hits home. He plays an older spy who is so deep undercover no one is sure if he has been turned or not. Again, it is buried in cliché, but Head performs it so well that we don’t mind and the sucker punch finish to the story is worth the wait. Episode Five is also a decent watch, a game of ‘who is the bad guy?’ out of a corrupt minister fresh out of prison, a do-gooder member of the Cabinet who is accused of arms-dealer and the shady head of MI6, played excellently by none other than Hugh Laurie, who blends that pompous English conservative with the sass he later uses to make House a popular US show. More of his character, please. Yes, the show manages to redeem itself eventually, but there is always that sense that it could be a lot better. I am going to ignore the obvious problem and stop picking on Macfayden; I am a critic, not a bully. There are certain strands of the story that are under-cooked or ignored completely, almost as though each episode runs out of time. Certain side characters drop off the radar and we never learn where they got to. Episode Three’s bad guys are underdeveloped. It is never quite as good as the later episodes promised.

I will admit that the finale was amazing. The episode in itself is a tad rote, the bad guys little more than colourful narrative devices for the team to go up against their own boss in creative differences. It seems like a finale focused on tying up character arcs, although when your season is only six episodes long, there really aren’t any character arcs to do anything with just yet. However, the final ten minutes are fantastic, as a last minute disaster strikes. The tension is incredible, the outcome unpredictable and the direction keen. I appreciate that the budget couldn’t stretch to the real ending the season wants, so instead they cleverly end it on an ambiguous cliff-hanger that has you screaming at the screens. A nice finishing move, suggesting that Spooks might come into Season Two with a few tricks up its sleeve.

Final Verdict: Surprisingly poor, considering the later seasons, but this can be blamed on a formula not being set in stone yet and a lead who refuses to act.

6 thoughts on “Spooks – Season One: The Review”