Gears of War 2 isn’t necessarily a bad game, but compared to the fantastic original that came before it, it just doesn’t measure up. 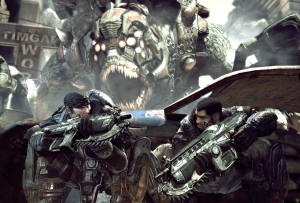 My main gripe with the sequel is the pacing. It seems like a strange thing to criticise, but it just makes the second entry so much harder to settle into. Gears of War is the kind of game, where breakneck action helps convey the atmosphere. Once the guns start blazing in the early missions, you don’t want to stop fighting until the game is over, caught up in a titanic struggle of colossal odds. Gears of War managed to get that impression across, broken up by its five acts. Gears of War 2’s division of the acts feels a little unbalanced. As you get closer to the finale, weaving through underwater caverns and Locust strongholds, the chapters will tick off as you go, but there doesn’t really seem to be a clear system to them. The characters don’t get that breather that acts as a transition between sections of the game. On paper, it sounds like I am nit-picking, but without this clear structure, Gears 2 doesn’t reach cult status like the original does. Gears of War 1 is fondly remembered, because gamers memorise every fight, every chapter, every set-piece. Every encounter with an enemy falls into place so well, like a jigsaw coming together. Gears 2 feels like too many ideas are thrown into a pot and they are overloading the game. It also means that Gears 2 begins to suffer when a certain fight drags on too long. This was the game where we started to tire of the combat system, something that we never began to dream of in the original. Replaying this game becomes a chore, as soon as you hit the Nexus, because you know you will be spending the next few segments battling through the Queen’s chambers, with only a few worthy set-pieces to break up the monotony.

Then there are moments that just do not work. Take the subplot of Dom Santiago tracking down his captive wife, Maria. This is obviously the writers trying to up the ante by throwing in some emotional resonance. It doesn’t quite work however, the gruff macho atmosphere of the alpha male quartet suddenly descending into what the writers think will be a tear-jerker. It just isn’t the place or the time, especially as there is only one way that thread of story is going to end. When you are trying to stop the Queen from destroying Jacinto, it becomes hard to summon up the tolerance for this certain distraction. Also, Gears 2 desperately tries to mimic the ‘creepy mid-act level’ from the first game. In Gears 1, we were introduced to the Lambent Wretches, jump scares and neat horror game tricks cropping up throughout the early stage of that act. Gears 2 introduces a brand new monster, but that entire segment feels forced and uncomfortable. For one, it breaks away from the main plot to exist, so the jump in tone feels all the more jarring. Another flaw is that it is so clearly trying to be a copycat moment. Like the Queen’s chambers, this segment will frustrate you on a second playthrough. Gears 2 has a few more moments, where it copies moments of the original but doesn’t quite match up quality-wise. RAAM is replaced with Skorge, who admittedly looks quite cool, when we first meet him, faster and more agile that the bulky Locust general from Gears 1. However, his boss fight is short-lived and the finale goes down a different angle, which is far too easy to make a suitable climax. Gears 2 ends on a bit of a whimper.

This review sounds like I really didn’t like Gears of War 2. On the contrary, I really did; I just think it is important to get the flaws out of the way first. I mentioned how certain things don’t work on a second playthrough. Those of you that read in between the lines will pick up on the fact that I have given Gears 2 a second playthrough. A third, if I am being honest. Because the fun is still there. It is great being thrown back into the body of Marcus Fenix, slowly knitting the old team back together and taking on the Locust that you had so much fun tearing into with the last game. Certain set-pieces fail yes, but then there are others that are beyond terrific. The Riftworm is a fantastic scene, starting with a well-timed slow reveal and ending with the bloodiest gaming moment I have played to this day (and if you know what I am talking about, then you will agree that there is no other contender). While I am disappointed that the second best monster, the Berserker, is missing and the very best monster, the Corpser, is reduced to a cameo appearance, there are some new monsters that are terrific. Skorge rides a terrifying Hydra, which poses a bigger challenge that the actual rider does. The boss fight with the Leviathan is another highlight, even if I felt it was slightly undercooked, compared to the other slow reveals of the bigger monsters. Other positives are simple new features with the gameplay. Grabbing an enemy and using him as a meat-shield is a simple, yet great new technique. This alone makes the simple shoot-outs more appealing than the first game. If you liked the first game, you will enjoy Gears 2. Just be prepared for a slight dip in quality.

Final Verdict: No, it’s not as good as the first one, but were you really expecting it be? Take Gears 2 as an excuse to throw yourself back into one of the better gaming franchises.