The Lost World isn’t as bad as you remember it.

How do we remember it? Well, if you are anything like me, the Lost World sticks in your memory as the shameless cash-in. Jurassic Park is up there with one of those rare movies that did everything right: the pacing, the tone, the characters. It is an honest classic and essential movie-viewing. The sequel is simply more of everything else, as though ‘more, more, more’ is a winning formula. The Tyrannosaurus Rex is promoted to the big bad of this movie and we get two of them this time around (three if we include the baby Rex). The kill count isn’t just doubled, it is multiplied beyond recognition. It comes across as Jurassic Park without the finesse. There are enough moments to bring back that Jurassic Park feel, like the animatronic dinosaurs, that iconic roar of the T. Rex and the return of Jeff Goldblum, but as far as narrative goes, the Lost World is a little all over the place, almost as though it is a bunch of gripping set-pieces strung together with not much thought put into the hows and whys. 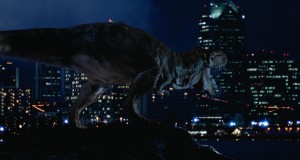 But then again, it is impossible to not like this on some level. The Jurassic Park movies have always had a secret weapon and that is the fact that no other blockbuster movie is doing dinosaurs. If you want a good entertaining flick about dinosaurs, then this is your only option. Therefore, no matter how stale the in-between bits get, the movie still has you in the palm of their hand, the moment they bring out the T. Rex. Visually, this film is still second-to-none, the bigger nature of the sequel giving us some scenes of pure brilliance. The Tyrannosaurus’ head crashing through the waterfall, a stampede of various dinosaurs breaking out of captivity, Raptor tails stalking their prey through the long grass… There are just too many moments of genius to not enjoy this movie. I think that, on some level, it finds a way to access that inner child in all of us, that doesn’t overly care about the story. We just want to see some dinosaurs on film. That is why the movie can shoe-horn dinosaurs that bring nothing to the story, yet no one sees this as a bad thing. Did we need a Pachycephalosaurus in this movie? No, but who cares? Those things are awesome. The bit of this movie that separates the fans into two camps (love it or hate it) is that infamous scene when the T. Rex gets off of the island and tears its way through a city at night. It stinks of plot holes and indulgence. There is no army coming to the rescue, the T. Rex somehow kills off its captors while in chains (and with its victims being in rooms smaller than the T. Rex’s head), and editing means that everyone gets a happy ending. It is easily a King Kong cash-in. However, again, appreciate the moment for the visuals. Seeing that T. Rex searching for its baby with the backdrop of Los Angeles is pretty incredible and almost definitely being used as a screen-shot for this review. My bigger problem with the movie is the scene where the teenage girl uses her talent as a gymnast to fend off a pack of Raptors. Now that is just too stupid for even me to get on board with.

Final Verdict: As a whole movie, The Lost World is pretty poor but as a series of great scenes and incredible visuals, it works a treat.

6 thoughts on “The Lost World – Jurassic Park: The Review”