Director: Jonathan Mostow
Cast: Arnold Schwarzenegger, Nick Stahl, Claire Danes, Kristanna Loken
Plot: John Connor (Stahl) believes he stopped Judgement Day, but when a Terminator (Loken) is sent from the future to kill off known associates of Connor, he is forced to face the nightmare all over again.

The third Terminator movie gets a bit of a bad rap. Why? Well, mainly, because James Cameron (and to a lesser degree, Linda Hamilton) aren’t involved anymore. As new director on the block, Jonathan Mostow, sets up his story, there is a sense that he is mimicking Judgement Day rather than doing anything new with the series. This is painfully obvious as the movie starts, checking of a list of things we see in every Terminator movie. Both Arnie and an unknown someone are sent back from the future. Both of these characters go on a quick side-quest to gather some clothes and begin tracking down their targets. There is a slight twist in the fact that Connor has become so adept at hiding that the bad guys are targeting the rest of the rebellion, key players that are vital to Connor’s resistance in the future, including his wife-to-be, Kate Brewster. However, this new take on the series is soon forgotten, as we get to the same routine of two killer robots getting into hectic fights and beating each other to robotic shreds.

And yes, true, there is a lot of little things about Rise of the Machines that makes it a pale imitation of the two classics that came before. I am still unsure how I feel about Kristanna Loken’s T-X, allegedly the deadliest Terminator yet. For one, Robert Patrick’s bad guy last time around is clearly much harder to kill, Loken’s biggest staying power the fact that she doesn’t seem to stay down for too long. There are some cool new features that make her fresh enough to justify her addition to the story. She has weapons that come out of her arms and can control nearby vehicles and computers. Also, the handy upside to casting a female as your killer robot is that the actress in the role doesn’t have to try to measure up to Arnie in terms of being a memorable killer. The shift in gender is enough to make her stick out. That being said a few cringe-worthy moments of sexualisation of Loken’s baddie come across as very indulgent. She tests DNA by sucking blood off her finger. Her breasts come with an augmentation app. Little things like that might seem like a good idea in the writer’s room, but it hurts the clever Sci-Fi quite badly, revealing it to be the male fantasy action that it secretly is. Yes, we men are simple creatures, but we don’t like to be reminded of it. Other moments of indulgence hurt the plot too. There is a touch too much humour, almost as though the movie is about to descend into parody at any given moment. Cameron opened the doors to a few gags with his sequel, but he balanced it fine with dramatic gravitas. Here, funny as it is, Arnie steals his clothes from a male stripper and Loken’s apparently emotionless Terminator does a double take, when Arnie comes back from the dead. The thing that hurts this movie the most though is the punch-up sequences. They are not as well directed as before, coming across as a little clumsy. They are heavily choreographed, so the robots fighting each other, come across as stiff mannequins. The jokes are at their worst here too, as Arnie smashes Loken head-first into a toilet and Loken’s finishing move is grabbing Arnie’s crotch. 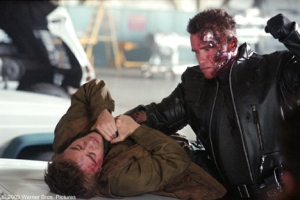 But once we’ve hit those bumps in the road, Rise of the Machines becomes quite good. For one, it is a Terminator film with its biggest budget yet. We get the series’ greatest car chase yet with no expenses spared. Lorries are written off, everything explodes and the sequence rivals Mad Max in terms of vehicular carnage. Few moments are let down by bad animation and as a result, Rise of the Machines, if nothing else, is a smooth ride. Also, if Schwarzenegger and the director aren’t willing to do serious, then Nick Stahl and Claire Danes are prepared to find the tone for us. Stahl is great as the reluctant hero, easy to relate to and miles more likeable that Edward Furlong’s douchebag of a kid. I am also starting to appreciate Bale’s casting in the next movie. Squint and you can kind of see Stahl maturing into Salvation’s John Connor. Danes is given the hardest role, because it is difficult not to see her as a Sarah Connor stand-in. Thankfully, she finds her feet by the end of the movie and we stop comparing her to Linda Hamilton. Then there are certain moments that are the Terminator movie we want deep down. The account of Sarah Connor’s death is powerful and clever in its own way. John Connor hears a devastating piece of news about his future that shifts the relationship between him and his Terminator father figure. The movie peaks in a scene where Arnie’s Terminator resorts to its old mission and momentarily becomes the bad guy once again. And the ending is actually quite powerful, moving the story along in a bleak, yet decent way. It’s no Judgement Day, but it’ll do.

Final Verdict: No, it’s nowhere near as good as the first two, but it delivers break-neck action in its most explosive entry yet.

6 thoughts on “Termin-Ator 3 – Rise of the Machines: The Review”