Director: Spike Lee
Cast: Josh Brolin, Elizabeth Olsen, Shartlo Copley, Samuel L. Jackson, Michael Imperioli, Pom Klementieff
Plot: A man (Brolin) is imprisoned for twenty years and then released, a mystery man tasking him with the job of finding out why he was imprisoned and then released without reason.

I really don’t want to be the guy who criticises a film for just being a remake, but there is something about Spike Lee’s reboot of Oldboy that is just so below par and average. 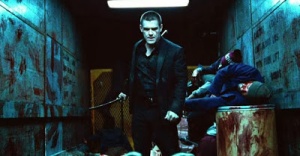 Occasionally, Spike Lee borders on doing something quite interesting with the story. Where we could argue Park Chan-wook sped through the introduction of the original Oldboy, Lee slows everything down and introduces our hero, Joe Dempsie, fully, before he is thrown into the jail cell that he spends twenty years in. Other good points include the casting of Samuel L. Jackson, who adds colour and excitement to the middle act of the movie and certain ironing out of plot points that rang a little hollow in the original. However, Spike Lee will follow that up with a total blunder that knocks fans starting to get into this new movie right back into their loathing mode. Sure, the introduction isn’t rushed this time around, but Spike Lee then goes and rushes the ending, which almost kills the powerhouse story that he is controlling. Spike Lee tries to do something different with the villain’s origin story and while the reveal is interesting in its own way, the original Oldboy gave the villain a tragic romance story that I found much more compelling and heartfelt. Worst of all, Spike Lee cast Shartlo Copley as the villain, who robs the character of every piece of interest Chan-wook wrote for him and he replaces that with a cringe-worthy English accent and an one-dimensional villain, who is always a few moments from twirling his moustache while stroking a white cat. The only good thing about the performance is that we end up being glued to the screens on the off-chance that Brolin is going to give the character a good punch to the jaw.

Spike Lee’s movie is always at its worst, when it is trying to replicate the original. I don’t mind directors trying to do something new with the story (Oldboy’s prison for hire is a great idea and I wouldn’t mind someone forgetting the original movie and making a film about that concept with a totally new character), but when Spike Lee sticks so closely to the plot, he is setting himself up for failure. We don’t want to same story, but watered down for Western audiences. No one has asked for that. The almighty fight sequence in the original is remade here, but it feels too mainstream. Too orchestrated. It has nowhere near the same awe-inspiring impact that the first movie did. The hero in this remake is nowhere near as tragic as Oh Dae-su, Brolin not being able to go to the limits that Choi Min-sik did with the character. The breakdown at the end of the film was phenomenal, Brolin’s felt a little by-the-numbers. I don’t know if this is Brolin’s fault per se, because at times, he seems willing to go down that dark route. One scene sees him lying in a pool of his own vomit, another sees his psyche breaking in his cell. I place the blame with Spike Lee, too scared an unrecognisable Brolin barking like a dog would annoy viewers. Everything feels so half-measured as a result. Even the all-powerful twist at the end which amazed me when the original came to a close, felt routine when Copley revealed it. Spike Lee deserves some praise for making a truly magical piece of cinema feel so mundane. That takes some skill as a director.

Mundane is a good word to describe this movie. At times, I imagined that I didn’t know that this was a copied and pasted story, but the only thought that bubbled to the forefront of my mind at those points, were that, if this was released as an original thriller, it wouldn’t get much further than an average action. Sure, the originality might have given it extra marks, but it would never get the same critical acclaim that Park Chan-wook’s version did. It feels too crisp and new. There is none of that raw power that made me fall in love with the first one. The mystery element feels like obligatory exposition rather than the driving force of the movie. It makes you wonder why Spike Lee even made this movie. I am assuming it is because he was a fan of Chan-wook’s original, as we get several references to that movie throughout the film. An extra wears the angel wings that Dae-su buys his daughter. At one point, Brolin looks at an octopus in a fish tank, referencing the iconic scene that Spike Lee cut from his own version. This new Oldboy brings nothing but a fan boy love to the table and, being perfectly honest, I don’t have time for that.

Final Verdict: Spike Lee’s version doesn’t compare to the original. Good in places, but as a whole, a forgettable affair.

3 thoughts on “Oldboy: The Review”