The Theory of Everything wasn’t actually as sad a film as I thought it was going to be. I came into it, expecting a real tear-jerker, witnessing the slow descent into sickness that this brilliant man was brutally subjected to. However, Marsh isn’t interested in the doom and gloom of his chosen topic, instead choosing to focus on the positive and bright side to Hawking’s life. The Theory of Everything becomes less of a wallowing saga and more of an underdog movie. This is not a movie about illness; this is a movie about being successful, despite the illness. We are introduced to Young Hawking as an odd yet charming student, not only with all of his body functions but an active crochet player and member of the University rowing team. He is truly brilliant, astonishing his tutors with his advanced understanding of astrophysics. As he begins to form his own ideas on the universe and its many secrets, he also gets close to Jane Wilde, an arts student who he takes a fancy to. Their love story quickly blossomed his charm and wit irresistible to admire. However, it becomes impossible to ignore the tell-tale signs of what is to come. Hawking has a slight limp, his hands twitch when tired… he is so absorbed in his youth that he cannot see that he is about to hit a massive obstacle in his quest to find a theory for everything. 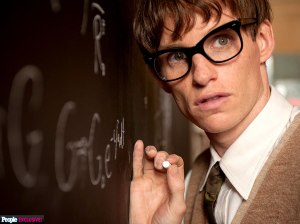 Eddie Redmayne is, there are no other words to describe it, phenomenal. The actor hasn’t quite interested me recently, his subplot in Les Miserables got in the way of the rest of the story and he was sadly involved in a pathetic adaptation of my favourite World War I novel, Birdsong, but here, he has jumped to my personal favourite for the Best Actor OSCAR. People might talk about how he truly embodies the later stages of Hawking’s illness, but Redmayne is just as masterful at the earlier scenes as well. Like any actor worth his salt in a biopic, Redmayne studies his subject and analyses every tick and mannerism of early Hawking. As a result, he comes to life right in front of your eyes. Redmayne stops becoming Redmayne and simply is Hawking. He has that correct blend of that awkward science student, from the heavy head of hair to the ungraceful walk, coupled with a twinkle in his eye and the charm of a socialite. He is instantly likeable, even if the early scenes play out the ‘young genius’ cliché cards often (perhaps more jarring, because we recently saw them in ‘The Imitation Game’.) Then there is, of course, the later stages of Hawking’s life, which saw his degenerative disease kick in. Redmayne is incredible. It is one thing to master every quirk of a real historical figure, but the control Redmayne has over his body to properly convey the disability Hawking suffers is unbelievable. His hands never loosen up, his feet always have that awkward, uncomfortable shuffle. In Redmayne’s hands, we see that proving a theory of time and space is just as difficult a chore as putting on a sweater or getting up the stairs to bed every evening. Redmayne totally embraces the motor-neuron disease and brings it to life in a thoughtful, terrifying and, more importantly, realistic way. The speech is impeccable as well. It takes a lot for an actor to take on that raspy, disabled voice, as Hawking struggles to work his vocal chords, without making it sound like a bad, retard impression from some dickhead on a school bus. When Redmayne does it, it feels serious and true to the condition. Even better, that shred of humanity never stops shining through the performance. Hawking might turn into a wheel-chair bound cripple with a robotic voice, yet Redmayne never stops conveying that fantastic wit and charm. Marsh’s direction really gets across the impression that there is quite a wicked sense of humour deep down in the astro-physicist, but it is trapped inside his body, meaning that we only ever scratch the surface of the man’s impossibly good nature. 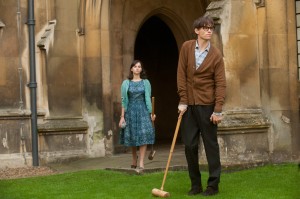 But, let’s be honest, you already knew all that. A nomination in the bank and just one look at the trailer tells you that Redmayne has nailed the part. I am wasting my breath telling you the obvious. The thing that really surprises you is that Felicity Jones meets Redmayne line for line as his wife, Jane. Her character is an incredibly complex and endlessly interesting one. She starts off as that nervous arts student, attracted to this captivating astro-physicist, but before she has even decided whether she truly likes him or not, he is crippled by an illness that will supposedly kill him in two years. She confesses her love and promises to stick with him through marriage, until he passes away. As the two years stretch into decades, his condition needing her to give up more of her personal life to care for him, the audience gets the sense that she might not even truly love him, rushed into a wedding out of pity, rather than passion. Jones plays the part with a wonderful poker face, so her character only reveals her true feelings with small lapses into emotion. She is resilient, loyal and one of the strongest characters in the film, her conviction being the thing that keeps him alive and inspires him to finish his work. As the film stretches on, her character begins to fray at the edges. A charming suitor pops into her life, a glimpse at a normal relationship that she could indulge herself with, if she just allowed herself to betray her husband for an instance. We never dislike her character for toying with her desires, as she goes above and beyond the call of duty for a husband, who at times is more obsessed with his work than his family and whose condition stops him from truly conveying how he feels for her. Perhaps the most hard-hitting part of her character arc is when Hawking’s disease takes a turn for the worst and she is given the choice of turning off the machine. Right there and then, she is given an out. He is likely to die, and if he does somehow beat the odds and live, he would be without a voice for the rest of his life, something that the physicist would be unable to cope with. She would then have finally fulfilled her promise to him and be able to start seeing the man waiting for her on the other end of the tunnel. Marsh’s direction is so incredible that rather than turning her into a bad character we end up hating, there is a fleeting thought in the back of our minds that she actually should leave him and follow her heart.

Final Verdict: The Theory of Everything not only gives us a beautiful portrayal of Hawking and his career, but of his wife as well, who turns into just as interesting a movie protagonist.

7 thoughts on “The Theory of Every-Thing: The Review”