Developers: Ubisoft Montreal
Publishers: Ubisoft
Plot: Ezio is sent reeling from a surprise assault from the Borgias family, losing the Apple of Eden in the process. He must rebuild the assassin’s creed and overthrow the Templar.

The success of Assassin’s Creed 2 left Brotherhood in a strong position to leave from. Brotherhood plays it safe and gives us the same, but bigger and more of it. 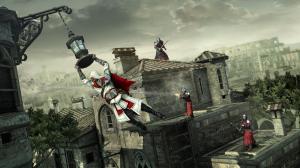 Take for example the renovating feature of the second game. This was a good move as it gave the players something to focus on, besides killing and progressing with the story. It seemed like a small detail, but it gave us a pet project within the game, something to rebuild from scratch. Brotherhood takes that further and gives us all of Rome to rebuild. This helps build the sense of coming from nothing and needing to slowly reform the Creed. It also adds a little urgency to the renovating side of things. In the last game, it was a hobby; in this game, there is a direct benefit from having a friendly building just around the corner from a fist-fight. While, it doesn’t really have the sense of home or charm that the village of Monteriggioni had, it still adds an extra dimension to the game which is appreciated. There are also a lot more side quests to help break up the game. Brotherhood introduces the Lair of Romulus, an underground cult that you can also disband to earn a lot more rewards. There are several chances to help Leonardo Di Vinci destroy some of the War Machines, created by the Borgias family. This also gives you a chance to unlock some of the most exciting gadgets to date. Brotherhood really does up the imagination ante with this one. On the downside, there are times when Brotherhood gets a little too busy. The whimsical sense of the previous Assassin’s Creed games has disappeared for a more serious and intense gaming experience.

The key difference from Brotherhood and the others games is the ability to recruit new agents into the Creed. This is an interesting dynamic to add into the game, because before, with the other two games, we were nothing more than a cog in the machine. Now you are charged with organising the way your guild operates, which makes Ezio feel more prominent a hero than Altair was. In order to earn money for your renovation needs and to train up your soldiers to the point where they can almost rival you when it comes to killing, you send any available assassins out onto missions. It is a relaxing sub-mission, because when the game gets harder and you are tired of failing to get past the difficult stage you are stuck on, you can give yourself a quick break by checking up on how your fellow recruits are doing. A few you will bond quite well with, even if the actual game doesn’t push that side of things. When an assassin messes up and dies, you will feel pity for your fallen comrade, especially if they were one of the first people to join up to your cause. It is always important to keep some of your assassins hanging around Rome though. When you find yourself cornered by guards, all it takes is a quick tap of a button and a squad of recruits appear from their hiding places, killing anyone that has their back turned to them. While the addition of recruits often threatens to over-complicate a game that simply wants to have you kill things, this is always a glorious moment that makes the concept of a ‘Brotherhood’ one of the better ideas to emerge from Ubisoft’s writer’s meeting.

Desmond also feels more playable here. In all fairness, Desmond isn’t as explored as much as I would have liked in this one. The overall storyline seems more focused on Ezio’s battle with the Borgias, rather than the massive conspiracy lurking in the shadows. It is present but when Assassin’s Creed 2 threw the Garden of Eden into the mix, then there aren’t too many places you can go with that. There is the usual hidden bonuses to add a little story to the mix for those craving a little more to do, but otherwise Brotherhood just builds up the characters more. In this one, Desmond is no longer a prisoner and free to leave the Animus at any time. This allows you to interact with Lucy, Shawn and Rebecca whenever Rome begins to bore you, which helps break up gameplay. You can even play as Desmond, as he begins to adopt some of the Assassin trademarks. While I will miss the clueless and selfish Desmond which is a more interesting hero figure (even Ezio loses some of this three-dimensional selfishness in this one), it is fun to see the arc expanding. It won’t be long before the series ditches history entirely and gives an Assassin’s Creed game, where Desmond is providing the action and assassinating.

Final Verdict: Brotherhood goes bigger and arguably better, although it is hard to argue that we are settling into routine. This is still a must for fans of the series though.