Director: Scott Frank
Cast: Liam Neeson, Dan Stevens, Brian Bradley, David Harbour
Plot: A private investigator (Neeson) is hired to track down two kidnappers who target the families of drug traffickers and kill their hostages, even if the ransom is paid.

We could argue that we have seen this film before. Liam Neeson plays a retired cop, now an unlicensed private investigator, who was once a maverick ‘shoot-first’ guy, crippled by a dependency on alcoholism, but now wiser and more careful about his surroundings. As far as detectives that have come from novels to the big screen, Scudder hardly screams originality. Nor does the premise that involves someone being ‘taken’ and Liam Neeson being the one guy who can get them back. However, A Walk Among the Tombstones is a lot more clever than its summary indicates and this movie is an interesting Noir tale.

Be warned, it is a dark one. Frank isn’t willing to water down the material to make the movie more appealing to a Hollywood producer somewhere. The story starts bleak with a gruesome murder and never really cheers up. Miserable is the word of the day and when your movie’s nicest character is Dan Steven’s drug trafficker, then you realise that you might have to stop looking out for a light at the end of the tunnel. From that moment when the kidnappers drop off their first victim and we realise what horrors Scott Frank is willing to show in this film, we are kept on a knife’s edge when it comes to tension. When a director/writer isn’t afraid to get his hands as dirty as he does with this script (the opening credits plays over a disturbing kidnapping scene), then you quickly realise that anything goes. If I was watching this on DVD, I would imagine I might be tempted to pause the film and take a coffee break to get over the skin-crawling perversion of a handful of the scenes. However, this is not an insult, as this is all a part of Scott Frank’s game plan and it is almost artistic in quality that he manages to stay as close as he can to the ‘too far’ line, yet not topple over it with some crude scenes. However, even then, we will be grateful for when Frank throws a few jokes our way. Look out for a scene involving Liam Neeson being tailed, a scarf and the sucker punch of 2014.

The biggest strength of this film is easily the two villains. They are kept in the shadows for a lot of the movie, being introduced to the audience via tight close-ups, until they are ready for their big reveal (too soon, if you ask me; I was enjoying the anonymity of the characters). They are some of the most revolting monsters to ever appear in this kind of Noir thriller and there are some nasty pieces of work hanging around the genre. Their disregard for their victims (“as soon as they are in the van, they are just body parts!” drawls one of the bad guys!), is unnerving, especially when they start commentating their torture to the victims, during the horrifying act. The best dialogue is given to them and because they are so inhuman, we have no idea what they are going to do next. There are a few twists thrown into the mix, because we have no idea how to predict what these two are capable of. The most disturbing moment of their character arc is when they see the fourteen year old daughter of their next potential victim. Frank somehow juggles the darkest of comedy with horror, as music suddenly plays onto the screen, as if the killers have just seen the love of their life in a rom-com, as the scene hits slo-mo, almost sexualising this young, oblivious teenage girl. It sends shivers down your spine, but the moment is so well calculated that you cannot help but be impressed at how neatly Scott handles these really dark moments. 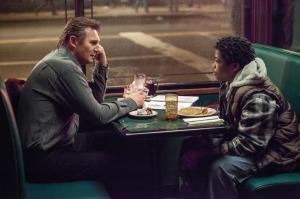 Sadly, A Walk Among the Tombstones is a little average when it comes to story. It lacks a late act twist to really throw the audience. The cat and mouse game between Scudder and the kidnappers reaches its conclusion and then the story logically fades to a close. Scott Frank does nothing wrong with the material, but it lacks that urgency that we could argue films need these days. No one will be insisting you rush to your cinemas tomorrow to catch this movie. The pace is kept slow and methodical, but as clichéd as Scudder rushing to get to a hostage in time is, we could have done with at least one moment, where our hero races against the clock. Liam Neeson’s character does everything in his own time, which hurts the final third. If Scudder does get his own movie franchise, which is looking like a possibility, A Walk Among the Tombstones almost feels like the middle chapter of that franchise, like a Bond film that becomes a slave to the set-in-stone formula. It comes with the private investigator territory; sure, this movie is a lot darker than most, but it still feels like something we have seen before.

Also, there is one scene that totally annoyed me. I really hope I misunderstood what is going on, because it seems like too foolhardy a continuity error for a major blockbuster to miss. There is a scene when a bad guy is handcuffed to a chain and the camera cuts, as he is reaching for a knife draw. In the next scene, we see a hand on the kitchen floor, apparently cut off. I assumed this was the handcuffed man slicing himself free, but in the very next scene, he has two hands and is able to function as if nothing had happened. Did I misread the moment or did that guy just grow his hand back in the space of a minute?

Final Verdict: If you can handle the dark as night tone, then A Walk Among the Tombstones offers a decent, if a little generic, Noir thriller.

4 thoughts on “A Walk Among The Tomb-Stones: The Review”