I watched Bowfinger directly after Ed Wood, going on a bit of a spree of watching films about films. There is something very rewarding about struggling in this industry and being treated to a film that shares your sorrows for a little while. Like Ed Wood, everyone is rearing to go, totally ready for breaking into the film industry, yet they are still waiting for their big break. The joy in Bowfinger is watching these characters go through hell to get that perfect shot and simply close the movie.

Several Hollywood trademarks are dragged into the spotlight, picked apart and mocked for us to enjoy. Steve Martin is a man hitting the 50 mark, yet trapped with the mentality and energy of a twenty-something. While it is never brought up, we never stop noticing that Bowfinger lives alone with no wife or kids, just a pet dog. He screams a producer that doesn’t know any better. The agent is stuck up his own ass, cleverly cast with a Robert Downey Jr going through a substance abuse problem (we still love him to pieces!) Heather Graham plays an up and coming actress, without much talent, but totally willing to seduce her way to fame and fortune. Everyone can think of one actress out there that Graham’s performance ridicules, without ever pointing the finger at anyone in particular. Less accusing are the Scientology jokes; no one is hiding where the inspiration for weird cult and religion, Minehead, came from. However, it is the lack of subtlety here that makes the joke with Eddie Murphy’s breakdown being carefully managed rather than being overcome, so hilarious. Anyone with an interest in the movies will find something rewarding in Bowfinger. 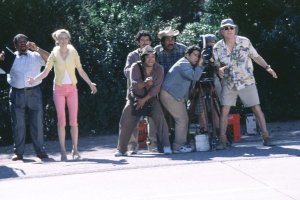 Bowfinger isn’t just for the film-maker audience however. It is a pretty on-the-ball comedy. Everyone in this film totally works for the joke, filled to the brim with the same over-the-top enthusiasm that their characters are going through. The fictional actors’ bad acting is phenomenally awful with Graham’s foreign bimbo character randomly dancing on the spot, whenever the cameras start rolling. The set-pieces get bigger and bigger, cleverly depicting how quickly a controlled film set can spiral totally out of control. While the concept is pretty smart, I must admit that the jokes aren’t particularly clever, but they don’t have to be. Bowfinger is the kind of film that lets you switch off for a moment and catches you, as you keel over laughing at some of the things the actors get up to. Comedy has the advantage of making us forget some of the more obvious plot developments or dip in quality, because we are laughing too hard to the next scene to remember exactly what annoyed us five minutes ago. Like Steve Martin? Like Eddie Murphy? Bowfinger definitely won’t disappoint.

Talking of Steve Martin and Eddie Murphy, they are the best thing on offer here. They are incredible in their respective roles, bringing everything they’ve got to the table. Steve Martin lives and breathes Bowfinger. From his very first line of dialogue, we have his character pegged and Martin knows better than to try and prove our preconceptions wrong. Steve Martin is an actor, who just has this spark to anything he does that makes his work so addictive. It is the greedy grin that flashes across his face at certain opportunistic moments, the total lack of consideration put into his film crew. I could call it up there with his best pieces of acting, yet most of his filmography is at this quality as well. Eddie Murphy is the one who is a little more hit and miss with his acting. No one is quite sure what they are going to get with a Murphy comedy. Thankfully, playing second fiddle to Steve Martin helps his performance a lot. He is asked to pop into a scene and inject that Murphy humour to it, rather than trying to hold up his own movie. Certain scenes just ask Murphy to be Murphy and steps back, letting him just control a scene. When Eddie Murphy is on this form, it is hard not to be won over by his total immersion in his work.

Final Verdict: Bowfinger knows what it is doing. Funny, knowing and boasting two great lead performances. You will like this movie.

3 thoughts on “Bow-Finger: The Review”