Director: Eugenio Mira
Cast: Elijah Wood, John Cusack, Kerry Bishe, Don McManus, Tamsin Egerton, Alex Winter, Allen Leech
Plot: A piano prodigy (Wood) returns to the stage after a hiatus, only to find messages left for him by a sniper in the shadows, promising to shoot him and his wife if he plays one wrong note.

These kinds of thrillers don’t come along too often. Why? Well, they are a tricky breed of cinema to get right, needing a sharp story and a hook to keep the audience interested. Most of the time, they don’t work and audiences tend to avoid this genre, because there are so many bad ones out there. Grand Piano, despite a silly premise, manages to prove itself as one of the good ones.

Right from the start, Mira makes a great decision in casting Elijah Wood. Wood is a great hero for a thriller, because he has perfected that nervous expression. We totally believe that this movie involves a life or death situation, because he sells it so well with his acting. He is not a reliable action hero, so we know that when he is thrown into the world of snipers and assassins, he will struggle to make it out of that situation alive. When the thriller hits the typical slow middle act, it is the fear and confusion in Elijah Wood’s eyes that keeps your pulse pounding. The rest of the cast perform to the best of their abilities, although Wood is the only one not constricted by the stock role in a thriller movie. John Cusack is little more than a voice on the phone, although his threatening delivery of lines keeps events chilling until the very end. Kerry Bishe, an actress who deserves more work, is good as the wife, totally unaware of the threat to her life. Tamsin Egerton is the other big name here, one half of a double act, of unsuspecting friends in the audience. Sadly, her and Allen Leech serve only to bulk up the first act of the thriller, although they are hardly upsetting to spend time with, delivering a small dose of comedy to keep things steady. 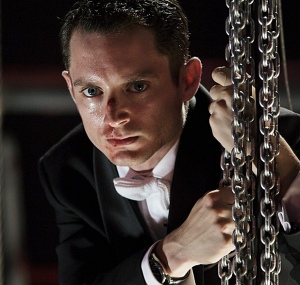 For me, it is the direction that deserves the most applause. When your movie is confined to one set-piece, a man playing a piano, it needs a certain amount of flourish. Eugenio Mira steps up to the plate brilliantly. Every moment usually involves the director pulling a trick from his hat. As Wood and Cusack deliver exposition, Mira pans across the theatre, allowing the audience get sucked into the menacing beauty of the moment. The camera is steady, yet never still, sometimes rotating the shot, so Wood’s reflection in the piano hovers into view. Some of the tracking shots in this movie, something I look out for in films ever since True Detective blew me away last year, are remarkable to behold. When we need claustrophobia, Mira gets the extreme close-ups in, getting across how trapped Wood’s protagonist is really well. Sometimes, I was able to stop thinking of the story and just enjoy what Mira was doing with his direction. At the same time, it never felt too try-hard, like we could argue it did with Danny Boyle’s artistic tricks with ‘Trance’. Mira is a competent director, yet he never shows off, when we need to start focusing on the story. Comparisons to Brian De Palma and Hitchcock have been made. While Mira isn’t quite there yet, Grand Piano will definitely attract fans of both directors, who should be pleased at this solid thriller.

Yes, it will be forgotten by the end of the year. Movies need to be louder and more explosive than Grand Piano to truly get ahead with today’s cinema. It is a sad thought knowing that a well-made thriller like this will be lost in the large quantity of movies spewing out of the industry. As good as Grand Piano is, it needs more. A final twist? A bigger star? I really liked this movie, and I am confident that most movie-lovers will as well, but thanks to a limited release and a hard sell at making people spend time with a guy at his piano, Grand Piano is sentenced to being little more than a hidden gem.

Final Verdict: A solid thriller, well-acted and breath-taking direction, even if it is a little too by-the-numbers to earn wider success.

2 thoughts on “Grand Piano: The Review”