We don’t get films like this anymore. Standing proud alongside the Godfather movies and Once Upon A Time in America, Scarface is a film any cinema-lover needs to see at least once. It depicts the life of Tony Montana amazingly well and captures the corruption of greed and power.

Even if you haven’t seen this film, you have almost definitely heard of it. While I rarely sit down and watch the whole 170 minutes anymore, I often fast-forward to my favourite bits. There are so many classic scenes that even when Scarface begins to get bloated and indulgent, we are still kept hooked by the memorable script and keen direction. The chainsaw scene early in the film is gruesomely amazing and back in 1983 when it first came out, it must have made a few audience members very queasy. Then there are some of the quotes: Tony Montana calmly telling his unstable boss that ‘Every dog has his day’. The word ‘fuck’ is used over 200 times. However, the all time best scene, complete with everyone’s favourite movie quote, is easily the finale. Scarface’s major success is the fact that, even if the length of this film weighs you down, the dramatic climax makes the long cinema session so easily worth it. It is one of the most action-packed, explosive endings to a movie of all time. Scarface, broken and defeated by his own greed, stands off against waves of mobsters. It is hard to take the sequence seriously but that has added to the overall effect. It is the best ten minutes of the entire movie and the main reason you might find this movie recommended to you. 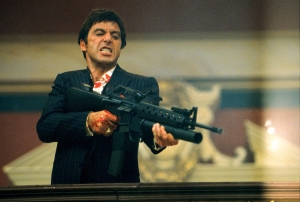 SAY HELLO TO MY LITTLE FRIEND!

One thing I didn’t remember from the last time I watched Scarface, was just how much of the 80s is hidden away in this movie. The montage scenes are dripping with songs straight from an Eighties power ballad album. It made the movie a much cheesier experience. On the other hand, the montages were handled well. The dialogue took a back seat and the actors has to show off with more subtle body movements. Years passed by, but we never lost track of what was going on. Michelle Pfeiffer’s reptilian trophy wife wasting from a crippling cocaine addiciton, the secret affair between Tony’s best friend and his cousin. As far as montages go, Scarface is up there with the best of them.

Al Pacino is amazing. He personifies the character so well. While part of me got slightly dissuaded by the fact it did come across as a love letter to Pacino, a film to show off how amazing the actor is, I couldn’t help byt appreciate the performance. Tony Montana is a nasty, horrible little man. He is driven by ‘wanting things’ and he destroys everything he consumes. His gorgeous wife turns into a lifeless shell soon after the marriage. He devours cocaine, never getting hit with the satisfaction he seeks. Montana has all the money in the world, but he never experiences true happiness. There is something so deranged and grotesque about the performance. He is always a few moments away from snapping into a violent rage. The constantly stoned glaze is always present in his eyes. This is Pacino’s show and the one shame of the delivery of the performance is that ‘the gangsta style’ totally misses the point of this crime drama and thinks that Scarface should be idolised, rather than avoided. But therin lies the problem with cult films.

Final Verdict: A true classic everyone should see, if only to annoy your friends with that accent.

7 thoughts on “Scarface: The Review”